Emboldened in Syria and Iraq, Islamic State May Be Reaching Limits of Expansion 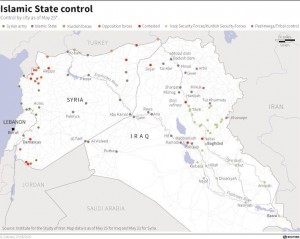 With its two biggest victories in nearly a year in Iraq and Syria, Islamic State has energized its fighters, littered the streets of two cities with the bodies of its enemies and forced Washington to re-examine its strategy.

The near simultaneous capture this month of Ramadi west of Baghdad and Palmyra northeast of Damascus has reinforced the sway of the self-proclaimed caliphate of all Muslims closer to the ramparts of Islam’s two great historic capitals.

But although the fighters sound triumphant, vowing to press on to Baghdad and Damascus, there appears to be little room for them to expand their territory much further — at least for now.

In both Iraq and Syria they have lost ground in recent months as well as gained it. The weakest targets are already in their grasp, and they will have to devote as much effort to holding and administering the areas that they already control as to attempting to extend their onslaught.

In Iraq, Islamic State fighters already hold most of the land where their fellow Sunni Muslim Arabs predominate. The Shiite-led government has responded to the loss of Ramadi in the Euphrates River valley by dispatching Iran-backed Shiite militia, fresh from beating Islamic State fighters in the valley of Iraq’s other great river, the Tigris.

In Syria, rival Sunni Arab insurgent groups, once seen as feeble in comparison with Islamic State, have drawn support from Arab countries and grown stronger, expanding their own territory at the expense of the government of President Bashar al-Assad.

But even if there are limits to how far Islamic State — also known as ISIS — can expand its territory for now, the victories this month give it crucial momentum, important for maintaining the support of people in the places it rules over.

“The priority for ISIS now is to capitalize on the momentum that is gained from taking control of Ramadi and Palmyra because this war has been about momentum shifts,” said Ahmed Ali, senior fellow at Washington D.C.’s Education for Peace in Iraq Center.

“Up until (when) ISIS was able to take control of Ramadi, the momentum was against ISIS. Now this is a prime opportunity for ISIS to keep pushing, because it’s trying to regain its reputation as this invincible force.”