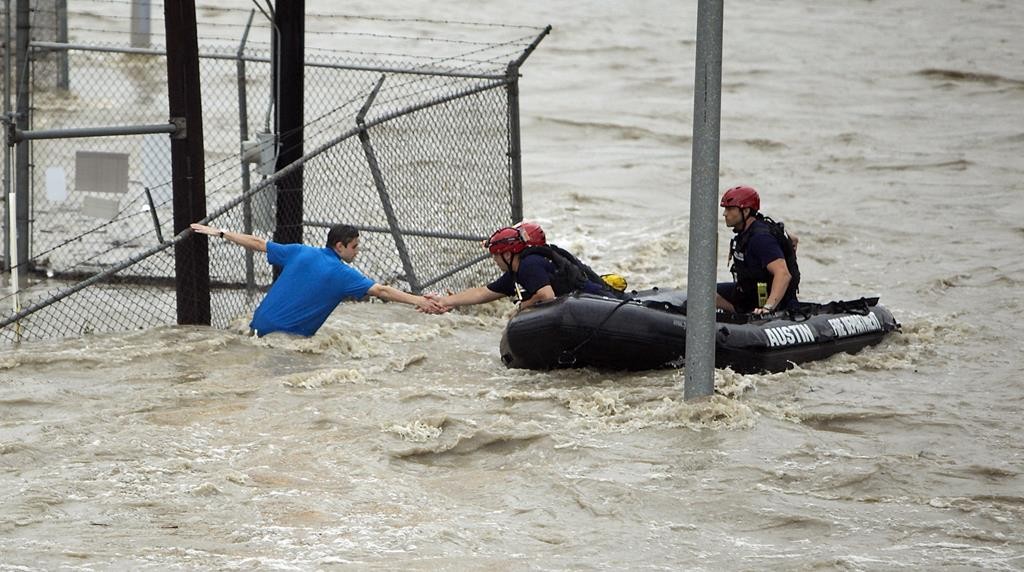 Floodwaters kept rising Tuesday across much of Texas as storms dumped almost another foot of rain on the Houston area, stranding hundreds of motorists and inundating the famously congested highways that serve the nation’s fourth-largest city.

Texas Gov. Greg Abbott declared disasters in 37 counties where more than 1,000 homes have been damaged or destroyed. Austin, Dallas and Houston all reported flooding

Meanwhile, the number of people missing in flooding along the Blanco River rose to more than 40, including a group of people who disappeared after a vacation home was swept down the river and slammed into a bridge.

Several more fatalities were reported — two in Houston, another in a vehicle on Interstate 45 and one more in central Texas. That brought to 16 the number of people killed by the holiday weekend storms in Texas and Oklahoma.

The water continued rising overnight as about 11 more inches of rain fell, much of it in a six-hour period.

The floodwaters affected almost every part of the city. Firefighters carried out more than 500 water rescues, most involving stranded motorists. At least 2,500 vehicles were abandoned by drivers seeking higher ground, officials said.

“Given the magnitude and how quickly it happened, in such a short period of time, I’ve never seen this before,” said Rick Flanagan, Houston’s emergency management coordinator.

The flooding closed several highways in Houston, and those that stayed open were soon a gridlocked mess.

In Hays County, about 35 miles southwest of Austin, Commissioner Will Conley said authorities were looking for 42 people, including a dozen people who, witnesses said, they saw in the floodwaters.

The rest may be unaccounted for simply because they are staying elsewhere or are not at home, Conley said.

Crews were also searching for victims and assessing damage just across the Texas-Mexico border in Ciudad Acuna, where a tornado killed 13 people Monday.

Some of the worst flooding damage in Texas was in Wimberley, a popular tourist town along the Blanco in the corridor between Austin and San Antonio. That’s where the vacation home was swept away.

The Blanco crested above 40 feet — more than triple its flood stage of 13 feet. The river swamped Interstate 35 and closed parts of the busy north-south highway. Rescuers used pontoon boats and a helicopter to pull people out.

Hundreds of trees along the Blanco were uprooted or snapped, and they collected in piles of debris up to 20 feet high.