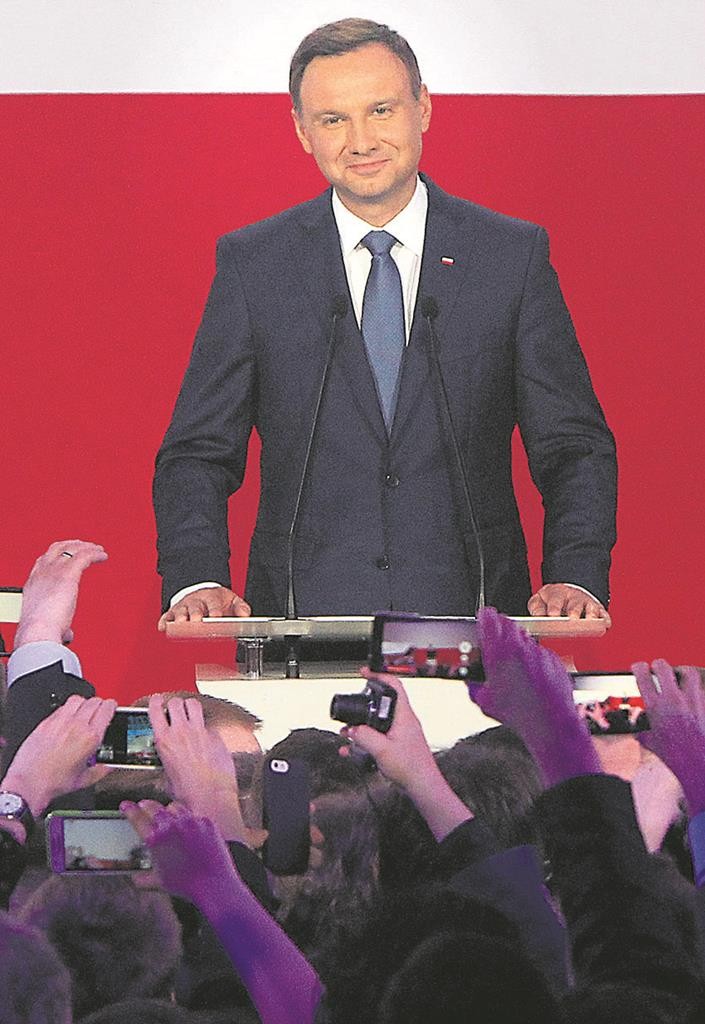 Andrzej Duda’s shock win in Poland’s presidential election has capped a rapid rise from backroom obscurity to head of state, and may herald a new political chapter in Eastern Europe’s biggest economy.

Duda was a legal aide to conservative President Lech Kaczynski before his death in 2010 in a plane crash in Russia.

Now 43, Duda sees himself as spiritual and political heir to Kaczynski, recalling how, two days before the flight, the president told him that a generational change was afoot, and that it would be Duda and his peers who would take responsibility for the future of the country.

“When I remembered this after the crash, it sent shivers down my spine,” Duda told Rzeczpospolita newspaper.

He quit when Bronislaw Komorowski won the subsequent presidential race for the ruling center-right Civic Platform, becoming a local councillor, then a member of the Polish parliament and eventually a lawmaker in the European parliament.

But he was still a relative unknown when the opposition Law and Justice party, now led by the late president’s twin brother Jaroslaw, endorsed him for the presidential election.

Duda has criticized Komorowski for acknowledging Polish complicity in the Holocaust. In a nationally broadcast debate last week, Duda attacked the incumbent for apologizing for the massacre Polish farmers perpetrated against their Jewish neighbors in Jedwabne in 1941, in which dozens of Jews were burned alive by villagers who trapped them inside a barn.

According to JTA, the discovery of the progrom, in 2000, triggered furious reactions by Polish nationalists who claimed there was too little evidence to support the assertions, which they said falsely depicted Poland as a perpetrator nation instead of a victim of Nazi occupation.

Duda’s unlikely victory, the conservatives’ first major electoral success in nearly a decade, has Law and Justice ready for a fight ahead of a parliamentary election in the autumn, with potential ramifications for Poland’s standing in Europe.

Born in the southern Polish city of Cracow, Duda is the son of two academics, and in his early years was a bookish boy scout. He earned a law degree, and later a Ph.D., from the Jagiellonian University, Poland’s oldest academic institution.

In 2005, the year of Law and Justice’s last parliamentary victory, Duda became an adviser to the party’s parliamentary caucus, helping draft one of its flagship bills on vetting public officials who might have a communist past.

He went on to become deputy justice minister in the Law and Justice government. He was involved in a legal challenge to a bill introducing stricter state oversight over a network of Polish credit unions, drawing criticism from opponents who say this put the stability of the financial system at risk.

On Aug. 6, Duda will become Poland’s sixth president since its transition from communism in 1989.

As head of state, Duda will be in charge of the armed forces, coordinating foreign policy with the foreign minister, signing or vetoing bills and drafting his own legislation. He will also appoint the head of the central bank.

That gives him and the Law and Justice party scope to change Poland’s relationship with the European Union.

Duda has also suggested Poland should curb foreign ownership in the banking sector. About two-thirds of Poland’s profitable and well-capitalized banking sector is foreign-owned.

He has also backed a conversion of mortgages from Swiss francs into Polish zlotys, a move that would mean billions of zlotys in losses for the banks, and called for a new tax on bank assets.