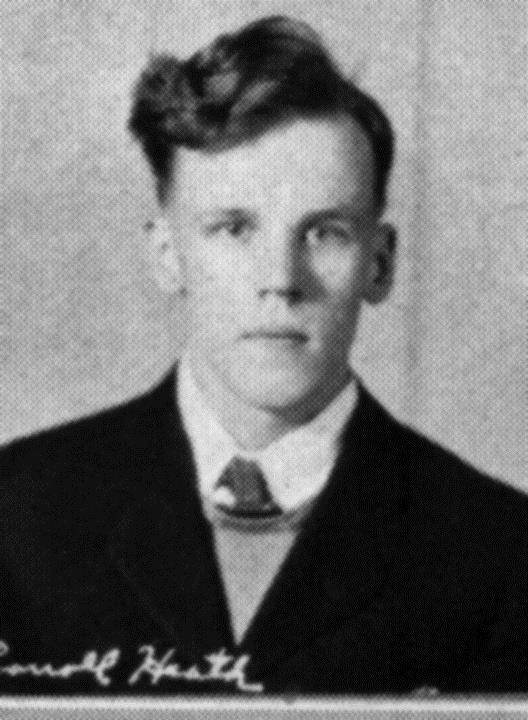 Carroll Heath didn’t have it easy growing up in the Great Depression. His father wasn’t around, his mother was a patient in a mental hospital and he kept largely to himself. Soon after graduating high school, he enlisted in the Army and wound up in the Philippines, where he’s believed to have died sometime in 1942.

It was a short life that went largely unnoticed, even in Pvt. Heath’s western New York hometown of Gowanda. For 70 years, he was the forgotten soldier, his name not listed among the town’s war dead, not inscribed on a World War II memorial in the middle of town.

And that’s likely how things would have remained had it not been for one of Heath’s high school classmates, a now-92-year-old World War II vet who enlisted his son to track down fading recollections that Heath went off to the Philippines to fight the Japanese and never came back.

“The guy had a pretty tough life,” Robert Mesches said by phone from his retirement home in Port St. Lucie, Florida. “This man should be remembered.”

Late last year, 66-year-old Alan Mesches, who grew up in Gowanda and now lives outside Dallas, began trying to find out what happened to Heath. “I’d like to complete the story. I’d like to see him get recognition.”

It hasn’t been easy. Heath wasn’t married and had no children. Little was known about Heath when he attended Gowanda High, and only a handful of his classmates are still living.

Alan Mesches, an Air Force veteran, spent the past several months tracking down every bit of information available on Heath, from census listings to school records to military documents. He learned that Heath was born in 1919 and was shuffled among relatives living in several rural communities around Gowanda, 30 miles south of Buffalo.

Heath’s name appeared in the 1940 census as living with an aunt and uncle on a farm near Gowanda. The same census listed his mother as a patient at the Gowanda State Hospital, a psychiatric facility. His mother apparently remained a patient at the hospital until her death in 1962.

Heath didn’t enter the Gowanda school system until 1936. He was already a few years older than his classmates, which may have accounted for his relative anonymity in a group that had known one another since first grade.

“With all the bouncing around, he was probably in and out of school,” Alan Mesches said. “It wasn’t unusual in the Depression era for kids not to go to school all the time.”

Heath’s senior picture appears in the 1940 edition of the Gowanda High yearbook. Unlike most seniors, he didn’t list any school activities. The yearbook staff’s description of him reads: “Quiet, curly locks, good natured.”

Heath enlisted in the Army in late February 1941. By December of that year, he was serving in the Army’s 1st Signal Training Battalion on the island of Luzon in the Philippines. On Dec. 8, the day after the attack on Pearl Harbor, Japanese warplanes bombed U.S. air bases on Luzon. Days later, Japanese troops began landing. The battle for the Philippines would last into early May 1942, when American forces finally surrendered.

The U.S. military listed Heath as missing in action as of May 7, 1942. His remains were listed as “unrecoverable” and his date of death listed as Dec. 31, 1942. How and where Heath died is unknown. He’s among the more than 73,000 Americans still listed as MIA in World War II.

Alan Mesches said he has been unable to find any living relatives of Heath’s. Nevertheless, he’s still trying to learn anything else he can about his final months in the hope of someday finding out where his body is.

In the meantime, the Gowanda Historical Society recently said it will add Heath’s name to the community’s World War II memorial later this year after repairs of damage from a 2009 flood are complete.

His name will be accompanied by a star, designating Heath as one of about three dozen locals who died in the war.