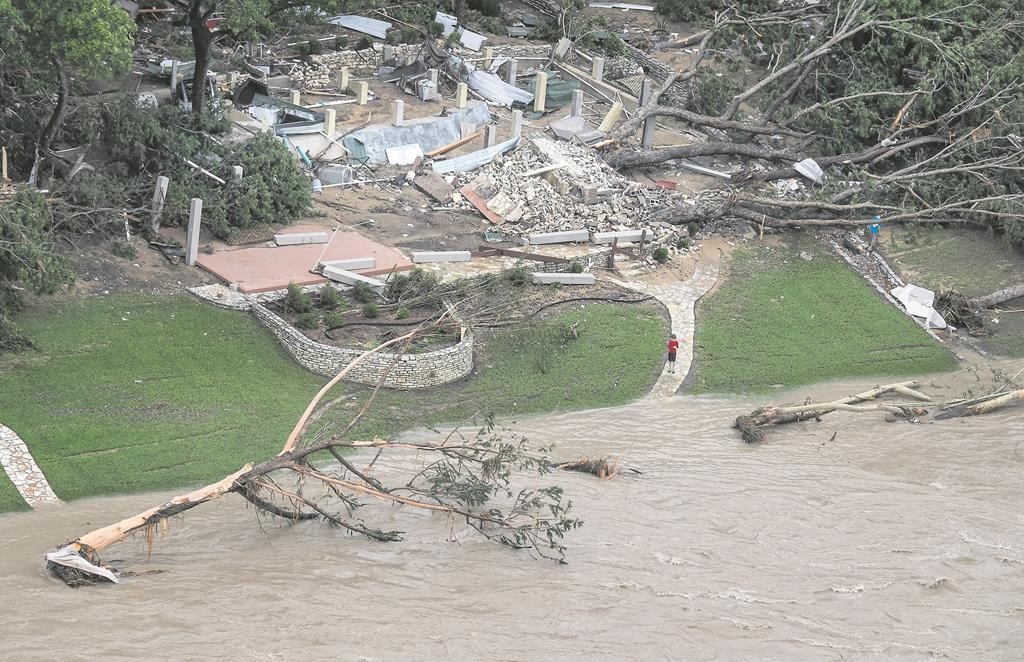 A line of storms stretching from the Gulf of Mexico to the Great Lakes dumped record rainfall on parts of the Plains and Midwest, spawning tornadoes and causing major flooding that forced at least 2,000 Texans from their homes. The storms prompted tornado warnings and watches as far north as Illinois Sunday night.

Three deaths were blamed on the storms Saturday and Sunday, including two in Oklahoma and one in Texas, where a man’s body was recovered from a flooded area along the Blanco River, which rose 26 feet in an hour and created huge piles of debris.

In addition, ABC News reported that an Oklahoma firefighter was killed attempting a water rescue, and about 350 homes were under water in a small Texas town, as a large part of the central and southern Plains states remained under a flash flood watch throughout much of Sunday.

In Claremore, Oklahoma, about 30 miles northeast of Tulsa, firefighter Jason Farley died when he was swept away while attempting a water rescue, said Deputy Chief Matt Wilson of the Claremore Fire Department.

Among the worst-affected communities were Wimberley and San Marcos, which are in Central Texas along the Blanco River in the increasingly popular corridor between Austin and San Antonio.

“It looks pretty bad out there,” Hays County emergency management coordinator Kharley Smith said of Wimberley, where an estimated 350 to 400 homes were destroyed and where three people remained missing late Sunday. “We do have whole streets with maybe one or two houses left on them, and the rest are just slabs.”

Kristi Wyatt, a spokeswoman for San Marcos, said about 1,000 homes were damaged throughout Hays County, which includes Wimberley. Five San Marcos police cars were washed away, and the firehouse was flooded.

Rivers swelled so quickly that whole communities awoke Sunday surrounded by water. The Blanco crested above 40 feet — more than triple its flood stage of 13 feet — swamping Interstate 35 and forcing parts of the busy north-south highway to close. Rescuers used pontoon boats and a helicopter to pull people out.

About 1,000 residents were evacuated from roughly 400 homes near an earthen dam at Lake Lewis, about 50 miles north of Houston. Montgomery County emergency management officials fear the dam could fail due to the flooding. Agency spokeswoman Miranda Hahs said it wasn’t clear when residents would be allowed to return home.

A tornado briefly touched down Sunday in Houston, damaging rooftops, toppling trees, blowing out windows and sending at least two people to a hospital.

Dallas faced severe flooding from the Trinity River, which was expected to crest near 40 feet and lap at the foundations of an industrial park. The Red and Wichita rivers also rose far above flood stage.