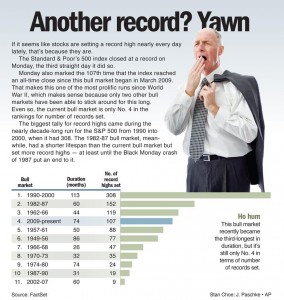 The stock market slipped back from its latest record high in a listless day of trading Tuesday. Oil companies and drillers tugged major indexes down as the price of crude oil dropped for a fifth day straight.

Wal-Mart Stores fell after reporting weak sales and a drop in quarterly earnings, a result of raises for workers and a rising dollar squeezing its profits. Wal-Mart’s stock sank $3.49, or 4 percent, to $76.43.

Major indexes headed lower at the opening of trading, wavered between tiny gains and losses throughout the morning then spent much of the afternoon sitting still.

The Standard & Poor’s 500 index has gained 2 percent this month, setting record highs along the way. “But it hasn’t felt like it,” said Hank Smith, chief investment officer at Haverford Trust. “The market pulls back slightly one day, then moves ahead. It has been a grind.”

The Dow Jones industrial average managed a slight gain, edging up 13.51 points, or 0.1 percent, to 18,312.39. That marked the fourth straight daily gain for the Dow.

The government reported that builders started work on new houses at the fastest pace in seven years. Housing starts jumped 20.2 percent to an annual rate of 1.14 million homes, the fastest clip since November 2007.

The news helped lift shares in D.R. Horton, PulteGroup and other builders. “The housing market comes back in the spring, is what realtors always say, and boy is this true today,” said Christopher Rupkey, chief financial economist at MUFG Union Bank, in a note to clients.

In other trading, Take-Two Interactive surged 18 percent after posting earnings that trounced analysts’ estimates. The company’s stock jumped $4.42 to $28.62.

The rally in Europe came after an official with the European Central Bank said that it would step up its bond-buying program in May and June to avoid slow trading in the summer months. The ECB’s effort tends to support stock and bond markets while weakening the euro.

In another development, Greece’s finance minister said he expects his government will reach an agreement with its creditors within the next week, potentially saving the cash-strapped country from defaulting on its debts. The talks have run on for almost four months.

Back in the U.S., government bond prices fell, pushing the yield on the benchmark 10-year Treasury note up to 2.28 percent from 2.24 percent late Monday.

The price of oil fell sharply Tuesday, extending its slide for a fifth day in a row. A rising dollar made oil, which is priced in dollars, more expensive for overseas buyers. Benchmark U.S. crude fell $2.17 to close at $57.26 a barrel in New York. Brent crude, a benchmark for international oil used by many U.S. refineries, fell $2.25 to close at $64.02 in London.

In other trading on the New York Mercantile Exchange: