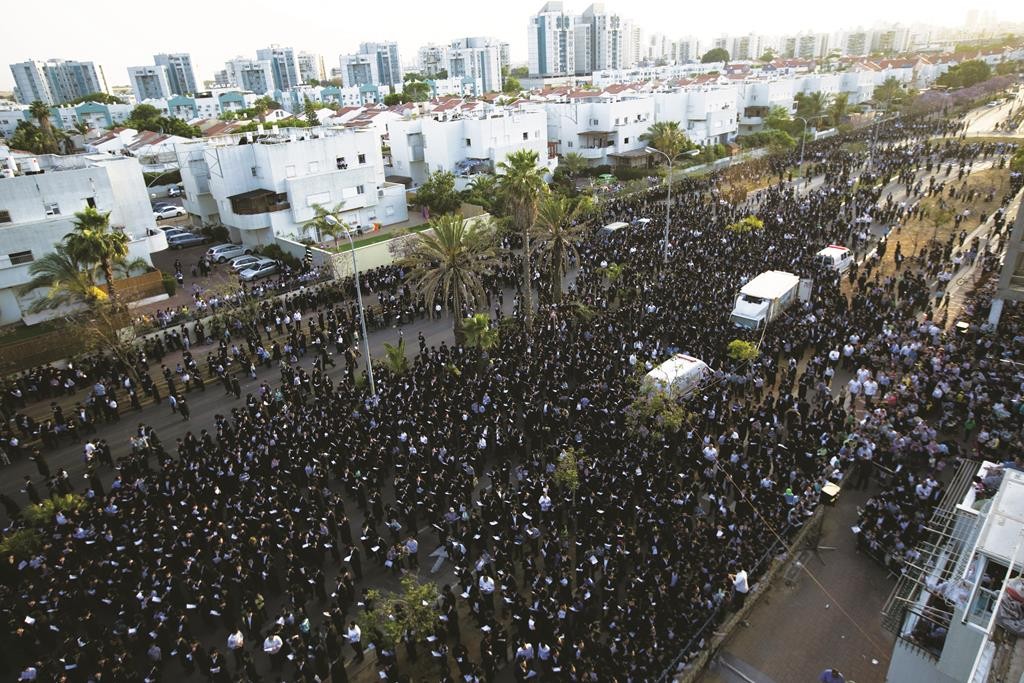 Despite the searing temperatures of the year’s first major heat wave, thousands of people filled the streets of central Ashdod on Monday evening to protest the recent opening of a large shopping mall on Shabbos.

Members of the entire range of religious groups in Ashdod and outside the city as well assembled for an atzeres tefillah which was weeks in the planning and drew over 18,000, according to a police estimate. Organizers of the event told Hamodia that they themselves were surprised at the overwhelming turnout.

Chairman of Mishmeres Shabbos Ashdod, Rav Yona Erlich, opened the event with a brief statement of purpose: “We have come together here today k’ish echad b’lev echad (the Jewish people united as one person with one heart) to lift our tefillos to Shamayim to arouse Divine mercy for the honor of the holy Shabbos, which is being trampled upon so brazenly. We are confident that the Al-mighty will not ignore our pleas, and that they will be mercifully accepted.”

The Rabbanim and Rebbes of the city were all on hand, as Sderot Yerushalayim and adjoining streets overflowed with participants, young and old, from many backgrounds. They stood for an hour and a half on a day when the temperature in Ashdod was in the 90s.

People then repeated the words of selichos after Rav Shlomo Peretz,

All were requested once again not to patronize any outlets of the Big shopping mall chain or Star Center that operate in Ashdod on Shabbos.

Earlier in the week it was decided at a meeting of the Rabbanim of Ashdod that if the chillul Shabbos continues, economic sanctions will go forward, including a wider publicity campaign and notifying financial groups — such as investment firms, banks and pension funds — that if they do not withdraw their backing from stores that desecrate Shabbos, the religious community will boycott them as well.

The event concluded in a peaceful and orderly manner, just as it had begun.

Ashdod police commander Noam Shakel told Hamodia: “It was an impressive and emotional event,” and he asked that his thanks for such a well-conducted event be conveyed to all concerned.