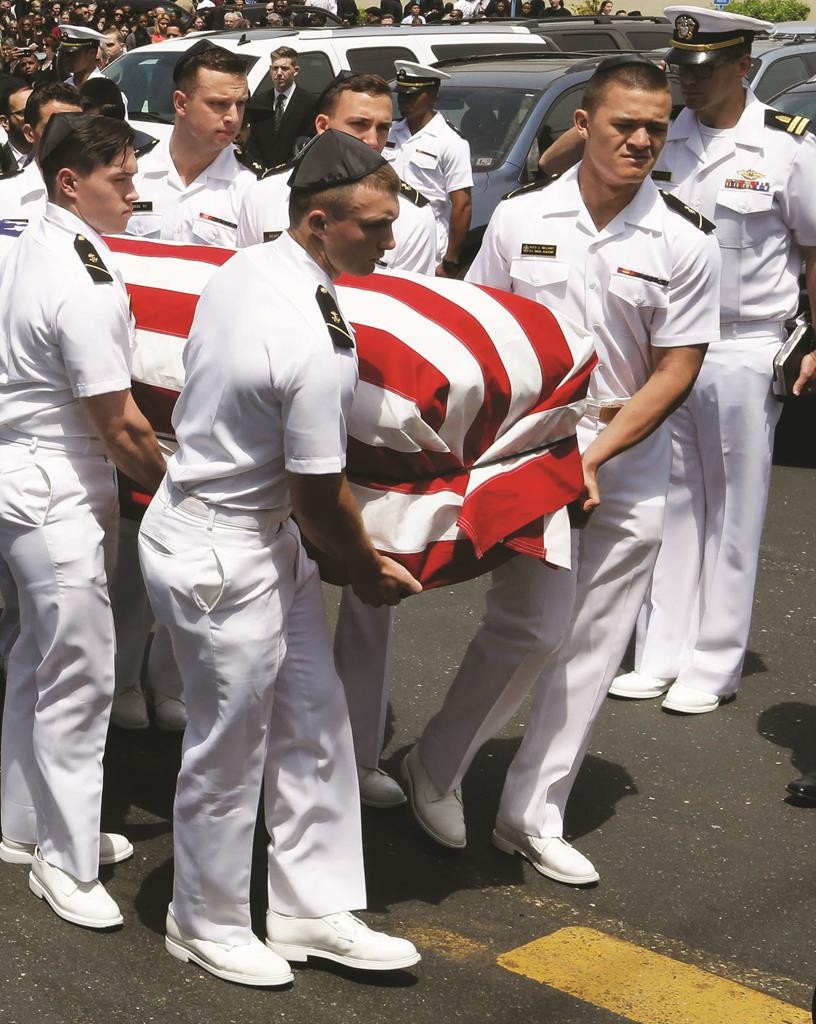 Among the victims of last week’s horrific Amtrak crash was Justin Zemser, z”l, 20, a Jewish student at the U.S. Naval Academy, from Rockaway Beach, Queens. He is remembered as an exceptional young man whose talents and accomplishments were surpassed only by his humility and kindness.

Zemser was valedictorian, student government president and captain of the football team at Channel View School for Research. Following his graduation two years ago, he joined the elite U.S. Naval Academy in Annapolis, Maryland, with the goal of becoming a Navy Seal.

His levayah was held last Friday at Boulevard-Riverside-Hewlett Chapel. It brought together people from the wide spectrum of those whom Justin Zemser had touched in his short life, including family and friends, classmates from high school, and over 150 fellow midshipmen and officers from the Naval Academy.

“This should be his legacy,” said his Aunt, Cathy Zemser. “His funeral brought together people of all religions, races, ages and economic levels, who all loved him. Everybody came with a story of how he had helped them.”

Mrs. Zemser said that her nephew’s accomplishments were driven by his sincere desire to “make a difference,” and that the family was overwhelmed by the outpouring of support from people, all of whom felt as if they had lost their “best friend.”

“He was a person who, when you spoke to him, listened a hundred percent and was ready to do anything to help another person,” she said.

Justin’s commanding officer at the Naval Academy, Marine Capt. Brandy Soublet, said that the one word to describe Zemser was “humble.”

“For how talented he was morally, mentally, physically — you would never know it. He was just so humble,” she said.

Justin Zemser volunteered for a wide array of community projects and took an active role in helping to clean up homes in the wake of Hurricane Sandy, which devastated much of his native Rockaway.

Former classmates remembered his sincere sense of caring and ability to encourage others.

“He had a real lev tov,” said his uncle, Richard Zemser. “He was a natural leader and a real mentch. I used to joke about him becoming the first Jewish president, but it wasn’t only a joke — he had tremendous potential. When he set a goal, the only reason that he did not accomplish it was that he had not gotten up to it yet.”

Ironically, Justin’s presence on the ill-fated Amtrak train was itself an illustration of his goodwill. He had returned home for a week of leave days before, but traveled back to Annapolis in the middle of his time off to help freshman-year midshipmen in a program for which he had volunteered. When the accident occurred, he was on his way back home for the rest of his break.

At Annapolis, Justin continued to strengthen his proud Jewish identity, despite the grueling schedule of the Academy. He served as vice president of the Jewish midshipman’s club and was expected to assume its presidency in the coming year. On his return from a trip to Eretz Yisrael last year, he told his commander that it had been a “life-changing experience” and that he hoped he could return.

Seven months ago, Justin began studying Chumash regularly over the phone with a chavrusa. “He was a low-key person, but his excitement to be learning Torah for the first time really came through,” said Rabbi Mordechai Beer, coordinator of Oorah’s study-partner initiative. “He was a tremendous baal middos. He made a real kiddush Hashem — a proud Yid who did so much for so many people. This is a terrible loss.”

He was an only child to Howard and Susan Zemser, long-time Rockaway residents and members of its historic Congregation Derech Emunah.