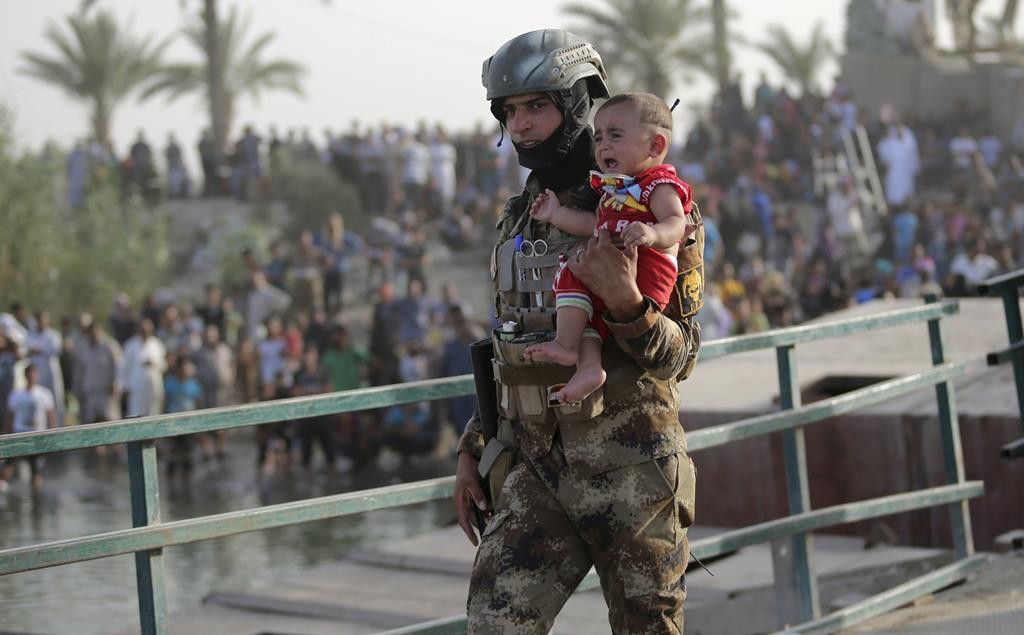 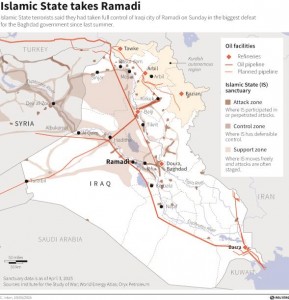 As it moves to try to reverse the stunning loss of Ramadi, the capital of Iraq’s largest Sunni province, the Shiite-led government is hamstrung by the sectarian politics it has failed to overcome ever since the Islamic State group began its rampage more than a year ago.

Prime Minister Haider al-Abadi vowed Tuesday to arm Sunni tribesmen to help retake Ramadi, a plan the United States has encouraged to better empower the minority community in the fight to defend their cities and to reduce their support for the Sunni extremists.

But the pledge met immediate skepticism from Sunnis, given that similar promises after the Islamic State seized the northern city of Mosul last summer were barely implemented.

It also met quick resistance from Shiite rivals within al-Abadi’s own government, who oppose arming Sunnis.

At the same time, the government was rallying Iranian-backed Shiite militiamen to join the offensive, raising the prospect of dangerous frictions in a country that was nearly torn to pieces by bloody Shiite-Sunni violence from 2006-2007. Though the Shiite militiamen have been crucial to reversing other losses to IS forces, they have also been accused of abuses against Sunni residents of those areas.

Around 3,000 Shiite militiamen have deployed near Ramadi, most in the Habbaniya military base and the town of Khaldiya, east of the city. Others deployed on routes from Anbar province toward southern Iraq to prevent any IS attempt to advance on Shiite sites there.

The capture of Ramadi was a major blow to the U.S.-backed strategy against the Islamic State group. Over the past months, the combination of regular troops, Shiite militias and Kurdish fighters backed by U.S.-led airstrikes have managed to seize back territory from IS across northern and western Iraq.

But on Sunday, the security forces and Sunni militiamen who had been battling the extremists in Ramadi for months collapsed as IS fighters overran the city. The IS gained not only new territory 70 miles west of Baghdad, but also large stocks of weapons abandoned by the government forces as they fled.

The city’s fall is a major test for the Shiite al-Abadi, who came to power eight months ago promising to better embrace Iraq’s Sunni minority to reduce support in the community for the Islamic State group. Al-Abadi’s predecessor, Nouri al-Maliki, was accused of fiercely anti-Sunni policies during his eight years in power that even some Shiites say helped push Sunnis toward the extremist group. Al-Maliki was pushed out of office after IS overran Mosul and much of the north last summer.

Enlisting the help of Anbar’s Sunni tribes was critical to the success of U.S. efforts to stabilize Iraq and defeat Sunni terror attacks in the latter stages of the Iraq war in 2007-2008. After the withdrawal of U.S. troops in 2011, al-Maliki cut off funding for pro-government Sunni militias and Sunni feelings of discrimination and disenfranchisement grew.

When al-Abadi came to office, he promised to create new Sunni tribal forces. While the government has put some together, progress has been slow.

Shiite militias have been key to victories against the Islamic State group on other fronts north and south of Baghdad in recent months. But they have also been widely criticized over accusations of being Iranian proxies and committing extrajudicial killings of Sunnis, as well as looting and torching Sunni property — charges militia leaders deny.

Many of the militias are in effect the military wings of powerful Shiite parties, a fact that ensures backing at the highest political levels. In the case of at least one militia, Asayeb al-Haq, or League of the Righteous, a political party was formed and secured seats in parliament in last year’s elections.

Also Tuesday, Iraq’s Defense Ministry said it had rescued a number of soldiers stranded inside Ramadi, releasing a video that showed two helicopters landing in an open area as several soldiers rushed to them. Later, the soldiers were seen disembarking at a military base.

The operation on Monday rescued 28 soldiers, according to a military official who spoke on condition of anonymity because he was not authorized to release the information.

The government said it was planning to recruit more forces to replace the soldiers who deserted their positions during the fighting in Ramadi, according to a statement posted on al-Abadi’s website. It promised “severe punishment” for those who “failed to carry out their duties during the Ramadi battle.”

Meanwhile, the United Nations said it was rushing aid to nearly 25,000 people who fled Ramadi. Most were headed toward Baghdad, according to the deputy spokesman for the U.N. secretary-general, Farhan Haq.