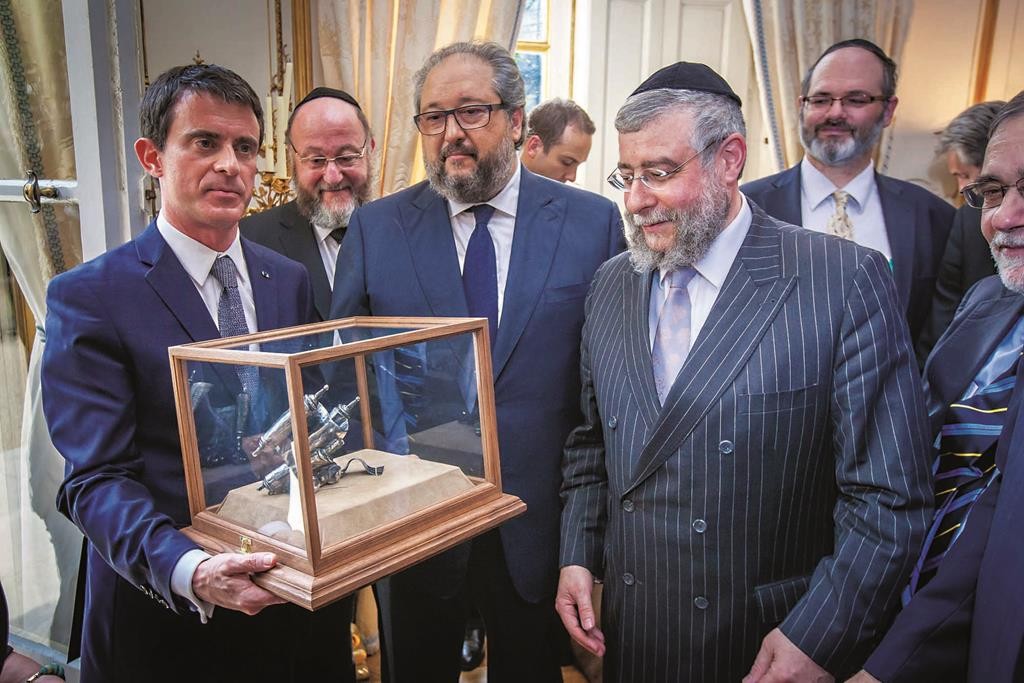 French Prime Minister Manuel Valls was awarded the Lord Jakobovits Prize for European Jewry for his “exemplary determination in the fight against anti-Semitism” by the Conference of European Rabbis (CER). The ceremony was held in Paris, a day before the organization’s membership convened in Toulouse for its biennial conference.

“Tonight, through your presence, through the vitality of your institution, you’re a testament to the success of European reconstruction,” said Valls, upon his acceptance of the prize. “This precious renaissance must be encouraged. It must certainly be protected. Because with it comes the resurgence of threats, the ignoble brand of barbarism, that again is claiming lives.”

Valls has been a consistent advocate of prioritizing the protection of his country’s Jewish minority, the largest in Europe. He has called to step up the fight against Islamist extremism in the face of rising terrorist acts in the country, most notably the January attacks on Charlie Hebdo magazine and at a kosher grocery later the same week.

“The attack on HyperCacher at the Porte de Vincennes will remain a gaping wound,” he said in reference to January’s attack. “France, on that day, understood that the era has changed, that French Jews were being threatened by a virulent anti-Semitism that hides behind a façade of anti-Zionism; [they are being] threatened by jihadism.

“France understood that the nation had to act together … it’s for this reason that police, gendarmes and soldiers have been deployed in front of synagogues, schools and buildings of the Jewish community. They are vigilant guardians. And they’ll be deployed — these are the words of the president of the Republic — as long as is necessary.”

The award, now in its third year, recognizes exceptional leadership and friendship to the Jewish communities of Europe. Last year the prize was awarded to German Chancellor Angela Merkel and the previous award went to Jerzy Buzek, former Polish Prime Minister and President of the European Parliament. It is named for Rabbi Lord Immanuel Jakobovits, z”l, former Chief Rabbi of the British Commonwealth, who was the first Rabbi to be ennobled in the House of Lords and the second president of the CER.

“There are some voices asking if there is a future for the Jewish people in Europe. I say this question can only be answered by European governments themselves. And if that answer is to be a positive answer, then they must follow the example of Prime Minister Valls,” Rabbi Pinchas Goldschmidt, President of CER and Chief Rabbi of Moscow, told Hamodia. “France has done more than any other country in this respect and [Valls] has been there in every aspect for the Jewish community, even though it cost him political support.”

Rabbi Goldschmidt said he hoped that the European Union would act to “homogenize” France’s anti-terror initiatives throughout the continent, especially in regard to the use of social media for recruitment and incitement.

The prize was designed by Georgy Frangulyan and depicts an open Torah scroll lying on top of three closed Torah scrolls, symbolizing the mission of the CER to recreate a presence of Judaism after one third of the Jewish people were wiped out in the Holocaust.