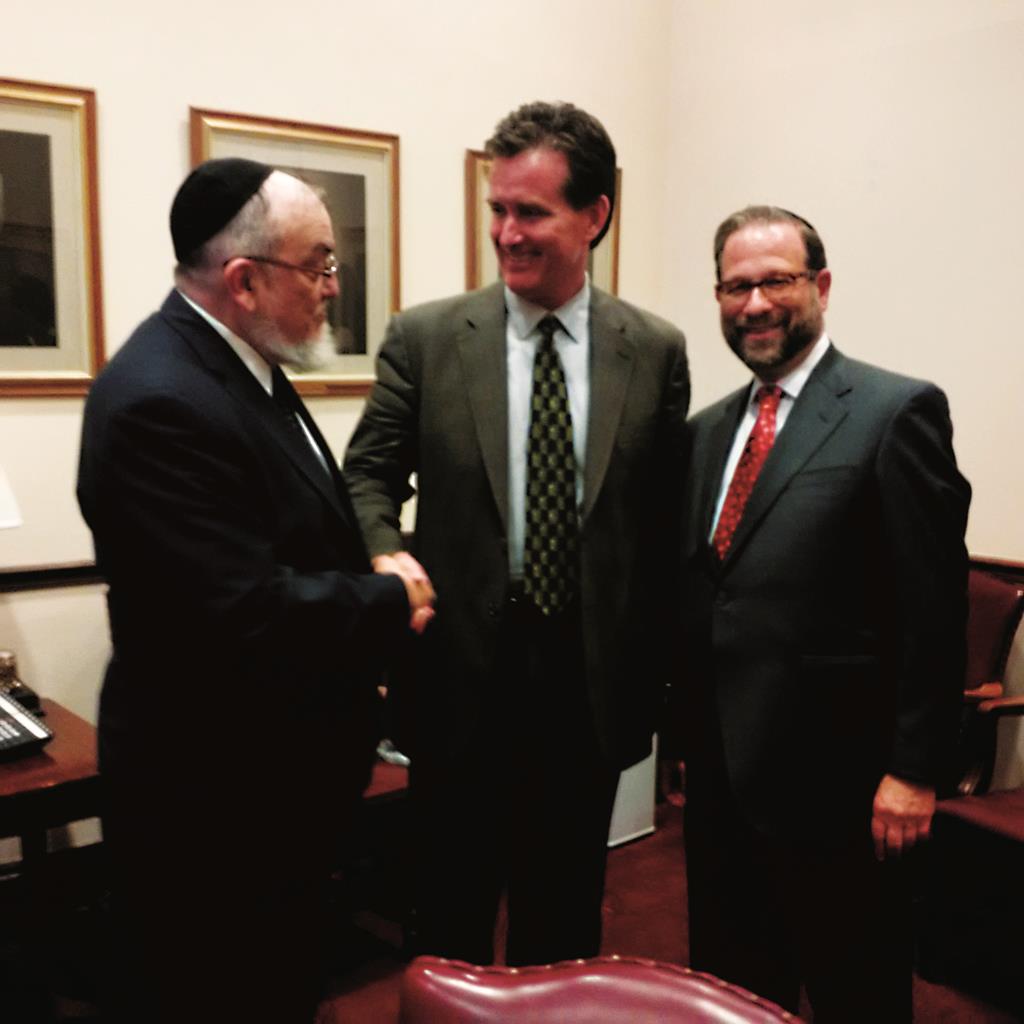 The newly sworn in leader of the New York state Senate promised to continue the “special relationship” his predecessor enjoyed with the Orthodox community, a bond that has helped secure an unprecedented amount of aid to yeshivos.

Speaking to Hamodia in his first interview with Jewish media since he ascended to his post, Sen. John Flanagan said he hoped to build on the effort made by former Senate leader Dean Skelos, who stepped down last week after eight years as the chamber’s top Republican.

“I have been fortunate to have enjoyed a very strong working relationship with the Orthodox community, and certainly with the strong assistance of my good friend and colleague Senator [Simcha] Felder,” said Flanagan, a Suffolk County Republican who has grown close to Orthodox groups through his leadership of the Senate’s education committee.

“In my estimation, that relationship will only build and grow and get stronger now that I have been given the privilege and opportunity of serving as leader.”

Chosen last week Monday by the 33 senators in the GOP caucus as one of “three men in the room” governing the state, Flanagan has long served as a top lieutenant to Skelos and is well known to community organizations.

“Throughout his tenure chairing the education committee,” noted Rabbi Chaim Dovid Zwiebel, executive vice president of Agudath Israel of America, “we’ve had many occasions to deal with him. He was respectful, accommodating and sensitive. We’re looking forward to furthering that relationship.”

On special education in particular, Flanagan took the lead in shepherding a bill through his education committee. A video of him debating an opponent of the legislation to ease placements for Orthodox parents went viral last year.

“Senator Flanagan has been involved in our community for the last several years,” said Rabbi Shmuel Lefkowitz, Agudah’s vice president for community affairs, who was in Albany last Tuesday where he met the new leader. “He was a leader in the effort to help special education. We are very grateful for that.”

“He even prides himself that he went to Touro College,” Rabbi Lefkowitz added jokingly. Flanagan got his law degree in the college founded by Dr. Bernard Lander, z”l.

State Sen. Simcha Felder, a Democrat who caucuses with the Republican conference, told Hamodia that Flanagan, Skelos’s handpicked successor who just turned 54, is intimately familiar with the Orthodox community. He has fought nearly every one of the battles for education equality for yeshivah families over the past few years.

Felder said that Flanagan has been an aggressive advocate in all three major fights for yeshivah parents in his position as chairman of the education committee.

“I had the privilege of working with Sen. Flanagan on passing the Education Investment Tax Credit in the Senate, securing funding for school transportation, and helping parents secure special education for their children,” Felder said. “Sen. Flanagan has a proven track record of supporting our community, and I know that as majority leader he will continue to fight for our needs.”

Flanagan is also on record as opposing Gov. Andrew Cuomo’s proposal to install a monitor with veto powers on the East Ramapo school district.

Noting that he has been at every meeting Agudah had at their annual mission to Albany, Flanagan said in the interview that he “couldn’t agree more” that the Orthodox community has a special relationship with the Senate Republicans.

“Not only have I embraced it in the past,” he said, “but I look forward to it prospectively.”