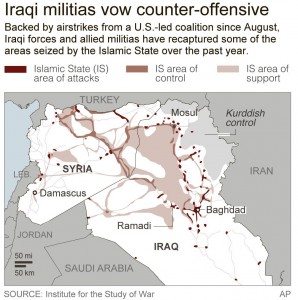 A column of 3,000 Shi’ite fighters arrived at a military base near Ramadi on Monday as Baghdad moved to retake the western Iraqi city that fell to Islamic State over the weekend in the biggest defeat for the government since mid-2014.

Setting the stage for renewed fighting over the city, Islamic State fighters advanced in armored vehicles from Ramadi toward the base where the Shi’ite paramilitaries were massing for a counter-offensive, witnesses and a military officer said.

Warplanes in the U.S.-led coalition stepped up raids against the Islamists, conducting 19 strikes near Ramadi over the past 72 hours at the request of the Iraqi security forces, a coalition spokesman said.

The United States, which has mounted air strikes on Islamic State positions since last August and sent advisers and arms to rebuild the shattered Iraqi army, acknowledged the fall of Ramadi was “a setback” but said its strategy would not change.

“To read too much into this single fight [over Ramadi] is simply a mistake,” said Colonel Steve Warren, a Pentagon spokesman. “What this means for our strategy, what this means for today, is simply that we, meaning the coalition and our Iraqi partners, now have to go back and retake Ramadi,” he said.

The Shi’ite militia, known as Hashid Shaabi or Popular Mobilization, was ordered to mobilize after the city, the capital of Anbar province, was overrun on Sunday.

The militiamen give the government far more capability to launch a counterattack, but their arrival could add to sectarian animosity in one of the most violent parts of Iraq.

About 500 people have been killed in the fighting for Ramadi in recent days and up to 8,000 have fled, a spokesman for the provincial governor said.

Islamic State said it had seized tanks and killed “dozens of apostates,” its description for members of the Iraqi security forces. An eyewitness in Ramadi said bodies of policemen and soldiers lay in almost every street, with burnt-out military vehicles nearby.

The city’s fall marked a major setback for the forces ranged against Islamic State: the U.S.-led coalition and the Iraqi security forces, which have been propped up by Iranian-backed Shi’ite militias

It was also a harsh return to reality for Washington, which at the weekend had mounted a special forces raid in Syria in which it said it killed an Islamic State leader in charge of the group’s black market oil and gas sales, and captured his wife.

This article appeared in print on page 1 of the May 19th, 2015 edition of Hamodia.

Beluga Whale That Strayed Into River Seine Dies During Rescue