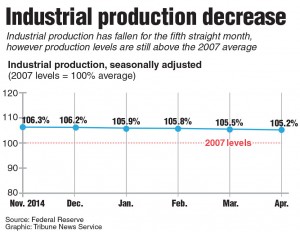 Industrial production fell in April for the fifth straight month, a sign that economic weakness at the start of the year has continued into the second quarter.

Output also was down 0.3 percent in March.

Analysts had forecast industrial production would be flat in April, as economic growth has been expected to improve following a weak first quarter.

Industrial production declined 0.7 percent from January through March, the first quarterly decrease since the Great Recession ended in 2009.

“These numbers don’t look great, but they are exactly what should be expected in the immediate aftermath of a plunge in oil prices in a country which is a big oil producer as well as a huge consumer,” Ian Shepherdson, chief economist at Pantheon Macroeconomics, said of Friday’s report.

Mining output dropped 0.8 percent in April, the fourth straight monthly decline. The figure had been down 0.1 percent in March.

The drop this year has been caused by “a sharp fall in oil and gas well drilling,” the Fed said.

Drilling decreased 14.5 percent in April and was down 46.5 percent from a year earlier.

Utilities added to the pain in April, with output declining 1.3 percent. Still, that was an improvement from a 5.4 percent drop in March.

The April decline was caused by warmer-than-usual weather, Shepherdson said.

Manufacturing production was unchanged in April after increasing 0.3 percent the previous month.

This article appeared in print in the May 18th, 2015 edition of Hamodia.