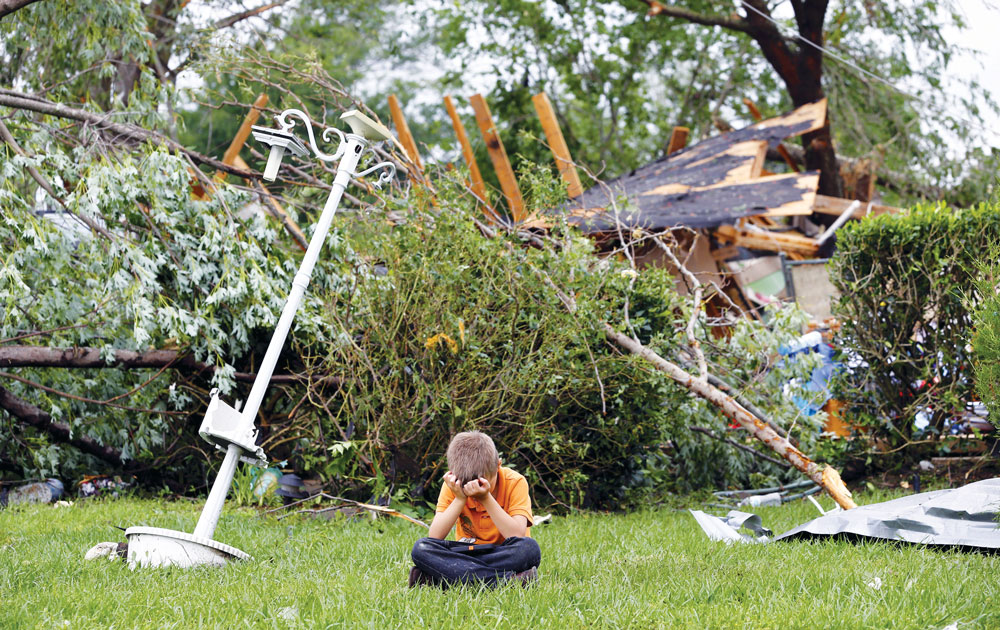 Emergency responders searched through splintered wreckage Monday after a line of tornadoes battered several small communities in Texas and Arkansas, killing at least five people, including a young couple who died trying to shield their daughter from the storm.

Three people were still missing in a rural East Texas town, raising the possibility that the death toll could rise. Scores of others were hurt, some critically.

The couple died when a twister hit their mobile home late Sunday in the Arkansas town of Nashville. Michael and Melissa Mooneyhan were trying to protect their daughter when the parents’ trailer flipped over and “exploded,” Howard County Coroner John Gray said.

“It’s a miracle that little girl survived,” Gray said. The girl, who is about 18 months old, was taken to the hospital and later released to relatives.

Once the word spreads, he added, the deaths will be a blow to the community.

In neighboring Texas, a tornado pummeled the small town of Van, damaging about 30 percent of the community, according to Chuck Allen, fire marshal and emergency management coordinator for Van Zandt County. Authorities confirmed at least two deaths.

For much of the day, eight people were still unaccounted for in Van, population 2,600, about 70 miles southeast of Dallas. Searchers eventually located five of them and planned to continue looking for the others into the evening.

Officials confirmed that the tornado was an EF3, with winds from 135 mph to 140 mph, Allen said.

Rescuers went door to door checking on neighbors. Damage was widespread, with trees uprooted and numerous homes and buildings flattened or ripped apart.

At least 42 people were injured, according to two East Texas hospitals. Four patients were in critical condition.

The same storm system dumped 11 inches of rain in some places and caused widespread flooding. Firefighters in Corsicana recovered the body of a driver who had ventured into the floodwaters after his vehicle stalled in a swollen creek.

The heavy rain caused a huge sinkhole to open up in Granbury. The 40-foot-wide sinkhole swallowed the parking lot of a supermarket and damaged water and sewer lines beneath, WFAA reported.

Elsewhere, winter seemed to return briefly to parts of the Dakotas.

Winter weather advisories and warnings were posted for southeastern North Dakota and north-central South Dakota, with a couple of inches of snow and strong winds expected. The same area experienced more than eight inches of snow over the weekend, breaking snowfall records for those dates in Rapid City.