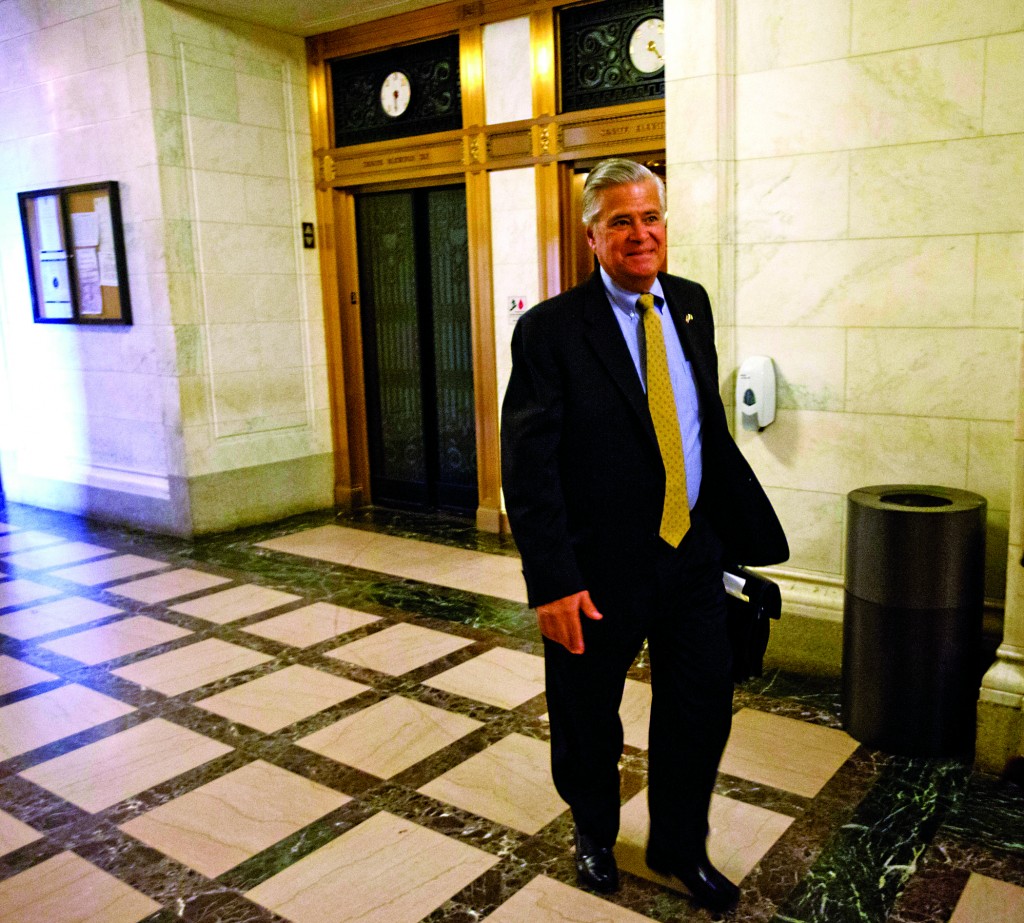 Rarely has so much been owed by so many to a single person.

Dean Skelos’s abrupt departure Monday from the leadership of the state Senate prompted an outpouring of gratitude from Klal Yisrael’s askanim in New York, who point to an unusual flood of aid to yeshivah parents during his eight years leading the chamber.

Skelos, a Long Island Republican, resigned Monday as he fights federal charges that he helped a company who employed his son. Following a midday conference meeting, Republicans, who control the state Senate, chose one of his top lieutenants, John Flanagan, to lead their chamber after Skelos endorsed him.

Rabbi Shiya Ostreicher, an advocate for the Orthodox community who netted an extraordinarily close relationship with Skelos over a decade of activism, bemoaned the loss of a friend he considers among the chassidei umos ha’olam — the righteous among the gentiles.

“There was never a time that I asked him for anything for the community that he turned me down. He doesn’t have the word ‘no’ in his vocabulary,” said Rabbi Ostreicher, a behind-the-scenes askan who agreed to a rare media interview in honor of Skelos.

Rabbi Chaim Dovid Zwiebel, executive vice president of Agudath Israel of America, said that Skelos enjoys “an extremely close relationship” with the Kamenetsky family, which lives in his district. Harav Binyamin Kamenetsky, shlita, Rosh Yeshivah of the Yeshiva of South Shore, would attend a breakfast held in Skelos’s honor each year, introducing him.

State Sen. Simcha Felder, a Democrat who caucuses with the GOP, said that Skelos told him on Monday that although he lost his high position, he intends to continue the relationship.

“He said, ‘Simcha, I might not be the leader but we have to sit down together and see as senators what we could do on the issues,’” said Felder, paraphrasing the conversation.

“Besides for being a great leader and an advocate for our community,” Felder added, “he is a very sensitive, compassionate and religious human being. I look forward to continue working with him.”

The Orthodox community’s relationship with Skelos began more than 10 years ago, before the latter held a leadership position. Rabbi Ostreicher was seeking a lawmaker who could introduce legislation to allow yeshivah gedolah students to receive state funding on a par with college students.

Skelos, a Greek Orthodox lawmaker whose district includes the Five Towns Jewish community, stepped up. He became the bill’s first sponsor, and ended up carrying it through the finish line three years later when Gov. Andrew Cuomo signed the Tuition Assistance Program into law. TAP currently helps yeshivos in the range of close to $23 million a year.

The relationship blossomed. The Orthodox community sensed a lawmaker with genuinely warm feelings to them and he saw a group of activists who never asked for anything for themselves, just for the community’s institutions and yeshivah parents.

Back in 2007, Skelos was convinced that yeshivah parents were discriminated against by being forced to pay for transportation. He took $5 million from his own member item — or pot of money each lawmaker can spend — and allocated it for a raffle of yellow buses for yeshivos.

That grant has since ballooned into a $35 million-a-year budget item for a fleet of hundreds of buses ferrying tens of thousands of yeshivah students each day.

Skelos, a silvery-haired soft-spoken man of 67, was first elected to the Senate in 1984. He said in a long resignation letter that he decided to step down to avoid distracting the Senate and because the media glare had become too difficult for his family.

“The past seven days have taken a tremendous toll on my entire family, including my wife, my son, my 94-year-old father, my brothers and sisters, and two young grandchildren, who have all been unfairly placed under the media’s spotlight,” Skelos said. “Most recently, a news photographer was in my son’s backyard and the disruption caused my 2-year-old grandson to fall and split his lip open.”

An Associated Press reporter described walking through Skelos’s Rockville Centre district, where many are more than willing to give him the benefit of the doubt.

They describe him as a “pillar of the community” and “good guy.” One Vietnam veteran walking into a barber shop this week was even more effusive: “If I have to go back to combat, I want him next to me. He’s that type of guy.”

Skelos, who was born, raised and still lives in Rockville Centre, a middle-class village in southeastern Nassau County, insisted he was innocent and would fight to clear his name.

“I have never received more positive comments from people in my district,” the Republican leader told reporters. “They know me, they know I’m honest.”

An attorney, Skelos is known as a shrewd negotiator and a frequent ally to Cuomo, a Democrat. He has easily won re-election, often defeating opponents by two to one margins.

The local athletic field is named for him, and a Skelos campaign sign posted outside his district office across the street from the Long Island Rail Road station was edited to declare: “We Support You, Thank You For Your Service to Our Community.”

Retired Marine Joseph Martello, who wanted Skelos by his side in combat, said Skelos is one of the few politicians he has seen knocking on doors in his neighborhood, interested in constituent concerns.

“I honestly believe that he’s a straight-up guy,” he said.

Lawrence Levy, a longtime political columnist for Newsday who now heads the National Center for Suburban Studies at Hofstra University, called Skelos “the proverbial pillar of the community.”

Rabbi Ostreicher is ready to add that Skelos is a pillar of the Orthodox community as well, and that his accomplishments for the community will be remembered forever.

In recent years, Skelos attempted to pass potentially historic tuition aid programs for yeshivah parents, even if he didn’t succeed. He had his chamber pass — three times — a bill that would have provided tax credits for, among others, parents who send to yeshivos and other private schools. (The bill ended up dying in the Assembly.)

Meetings with Orthodox activists over the years were remarkable for their warmth, with him suggesting ways to get bills through an often tough Albany environment. He regularly repeated the story of how he smuggled tzitzis and sefarim into the former Soviet Union to supply Jews with religious items.

“It’s a very, very big loss for our community that a person like him left,” Rabbi Ostreicher said. “We were very fortunate that we had a leader like him in Albany all these years.”