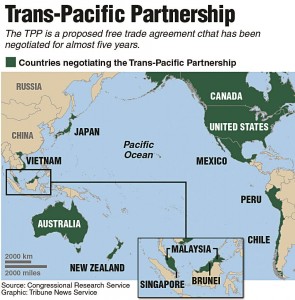 The president’s supporters said they will try again, possibly starting in the House. But they were unable to sugar-coat a solid rebuke of a major Obama priority by members of his own party, some of whom served with him in the Senate.

Only one Senate Democrat, Tom Carper of Delaware, voted for a GOP-crafted motion to start considering Obama’s request for “fast track” trade authority. Fast track would let the president present trade agreements that Congress could ratify or reject, but not amend.

Proponents needed 60 votes to thwart a Democratic filibuster, but managed only 52 in the 100-member Senate.

Tuesday’s vote highlighted the deep divide between Obama and the many congressional Democrats who say trade deals hurt U.S. jobs. Leading the fight against fast track are labor unions and liberal groups, which are crucial to many Democrats’ elections.

Most Republican lawmakers support free-trade agreements. They were in the strange position Tuesday of losing a vote but seeing the Democratic president take the blame.

“It is the president’s party,” said GOP Sen. Orrin Hatch of Utah. “It’s amazing to me that they would do this to the president on a bill of this magnitude.”

Several Democrats said Obama erred by pointedly criticizing a leading Democratic foe on trade, Sen. Elizabeth Warren of Massachusetts, in an interview with Yahoo News. These Democrats said they bristled when Obama suggested Warren was poorly informed and politically motivated. Democratic senators said they also are tired of seeing the Democratic president cozy up to Republicans on trade.

Most Republican lawmakers support trade agreements. But Obama must recruit a fair number of House and Senate Democrats to achieve his trade goals.

Several Democrats say they will back fast track only if Republican leaders clear a path for three other trade measures. One, to renew the African Growth and Opportunity Act, is uncontroversial.

The second calls for Trade Adjustment Assistance, which provides federal aid to workers displaced by trade agreements. Republicans don’t like it, but reluctantly acknowledge it’s the price for winning even modest Democratic support.

The third bill, involving customs enforcement, is the stickiest. It includes a measure to take actions against countries that keep their currency artificially low, which makes their exports more attractive. The Obama administration opposes the “currency manipulation” measure, saying it could invite international challenges to the Federal Reserve’s policies meant to boost the U.S. economy.

This article appeared in print on page 7 of the May 13th, 2015 edition of Hamodia.