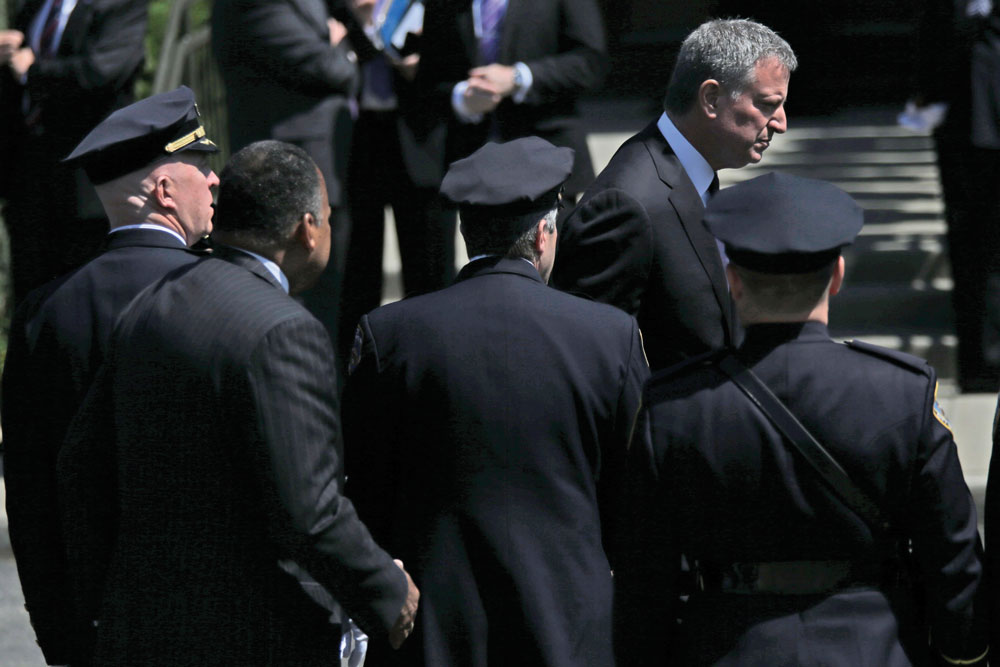 Thousands of police from around the country spilled out into the streets for the funeral of a slain New York City officer on Friday, calling for respect and understanding at a time when law enforcement is being deeply scrutinized.

Busloads of officers arrived from as far as California, Louisiana and Chicago for Brian Moore’s funeral on Long Island. As a hearse carried his coffin to the cemetery, they lined up 10 and 20 deep to salute him.

“Brian’s death comes at a time of great challenge” for officers nationwide, who are “increasingly bearing the brunt of loud criticism,” Police Commissioner William Bratton said.

Only five months earlier, the New York Police Department mourned two other officers who were killed in an ambush by a gunman who said he wanted revenge for police killings of civilians.

“What is lost in the shouting and the rhetoric is the context of what we do,” said Bratton, his voice cracking as he posthumously promoted the 25-year-old Moore to the rank of detective. “What is lost is the way we already work together, the ways we get it right. … What is lost is that public safety is a shared responsibility.”

Moore died Monday, two days after he was shot in Queens. He and his partner were in street clothes in an unmarked car and were stopping a man suspected of carrying a handgun when the suspect shot him in the head. 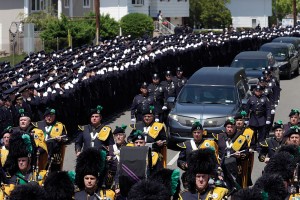 Detective Omar Daza-Quiroz, 33, traveled from Oakland, Calif., to stand with his colleagues — and stand for law enforcement.

“Right now, it’s a tough time in law enforcement,” he said. “Sometimes people forget we are human and that we have lives.”

Moore was the son, nephew and cousin of NYPD officers, and two other cousins serve on Long Island. Moore was so determined to follow them that he took the police entrance exam at 17 and “devoted his whole being to the job,” Mayor Bill de Blasio said.

After having to take a few weeks off for medical leave recently, Moore “counted the minutes” until he could return to work, and made a gun arrest his second day back — only a few days before he himself was shot, de Blasio said.

At the funerals of the two officers shot in December, hundreds of policemen turned their backs to the mayor in a searing sign of disrespect. Police union leaders had said de Blasio had “blood on his hands” for empathizing with protesters upset at a grand jury decision not to indict an officer in Eric Garner’s death.

An uneasy truce between de Blasio and the police eventually settled in after some police union infighting, a public backlash to a NYPD job slowdown and a series of City Hall investments in the police department. There has been no similar sign of tensions in the wake of Moore’s death, and no backs were turned on de Blasio Friday.

The suspect in Moore’s killing, Demetrius Blackwell, faces charges including murder, attempted murder and other crimes. He is being held without bail and has not entered a plea. His attorney has denied the charges.