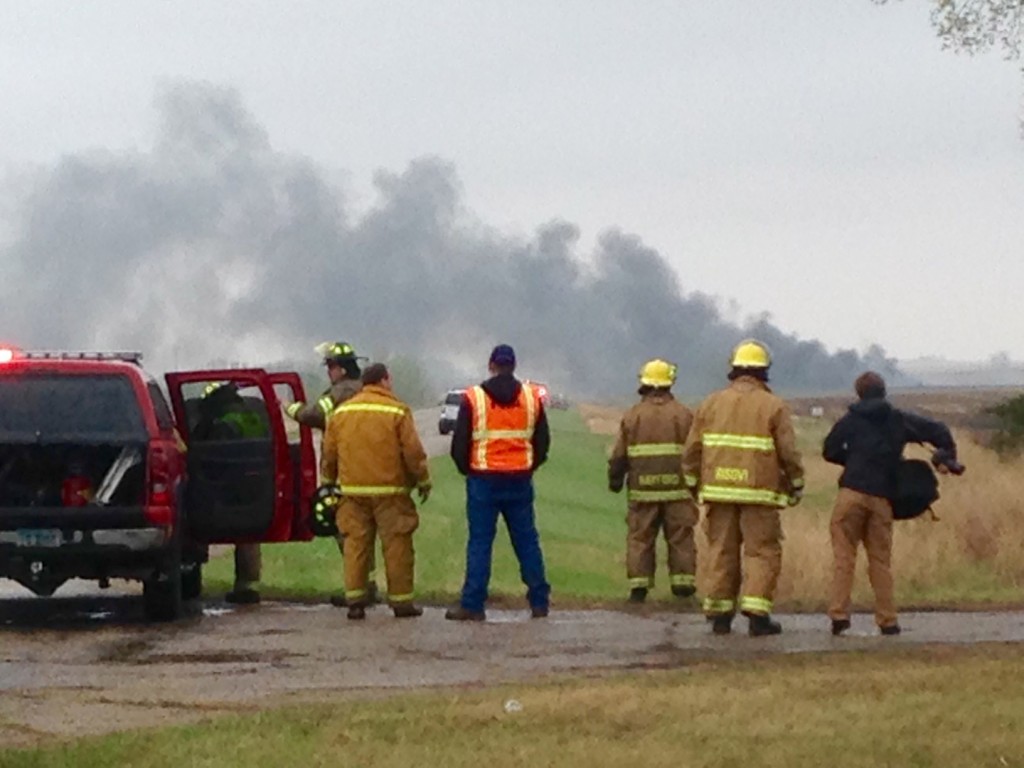 A train that derailed and caught fire Wednesday in rural North Dakota was hauling crude from the state’s oil patch, raising questions about whether new state standards intended to reduce the volatility of such shipments are sufficient.

The six tank cars that exploded into flames were a model slated to be phased out or retrofitted by 2020 under a federal rule announced last week.

It’s the fifth fiery accident since February involving that type of tank car, and industry critics responded to the latest with calls for them to be taken off the tracks immediately to prevent further fires.

No injuries were reported in the derailment of the 109-car BNSF railway train at around 7:30 a.m. That prompted the evacuation of the 20-resident town of Heimdal, about 115 miles northeast of Bismarck.

The Health Department was monitoring air quality and advising people not to breathe in the smoke. The danger from the smoke is mainly the particles it contains such as ash, not toxic chemicals, Glatt said. Rain may have helped wash some of the particles out of the smoke, though it might also keep the plume closer to the ground and more likely to be encountered by people, he said.

In the immediate aftermath of the accident, BNSF Vice President Mike Trevino said the intensity of the blaze prevented firefighters from directly attacking the flames. But crews positioned firefighting foam and other resources nearby and planned to try to put out the fire beginning Wednesday evening, Trevino said.

Curt Benson, a 68-year-old retired sheriff who alerted authorities, said he was getting ready for the day when the explosion outside town rattled his house. With the large number of oil trains that come through the community each day, he figured that was the cause.

“I got in my car, still … had shaving cream on my face, and drove down there,” he said.

There was no immediate word on the cause.

Industry representatives and state officials said oil companies have been complying with a standard that went into effect April 1 requiring them to remove propane, butane and other gases that occur in North Dakota crude to reduce the chance of tank cars catching fire. There was nothing to immediately indicate a violation of that rule with the train involved in Wednesday’s accident.

Members of Congress, who have called for a stricter standard to be imposed at the federal level, said Wednesday’s accident underscored that more needs to be done to prevent oil-train fires that could cause a major disaster in an urban area. In 2013, a train loaded with crude from the Bakken region derailed and exploded in the small town of Lac-Megantic, Quebec, killing 47 people.

“With trains carrying this highly explosive material by homes, schools and businesses each day, we need a strong national volatility standard as opposed to a patchwork of state laws,” said U.S. Rep. Nita Lowey of New York, the ranking Democrat on the House Appropriations Committee.

Tessa Sandstrom, of the North Dakota Petroleum Council, said safety efforts should instead focus on preventing accidents through enhanced inspections of tracks and railroad equipment.

The rail line through Heimdal runs next to an intermittent waterway known as the Big Slough, which drains into the James River about 15 miles downstream near Bremen, North Dakota.

There were preliminary indications that some oil from the derailed cars got into Big Slough, but it will be difficult to verify until the fire dies down and officials can get closer to the scene, State Environmental Health Chief Dave Glatt said. In a similar incident outside Casselton, North Dakota, in December 2013, almost all of the spilled oil was consumed in the fire, he said.

The Federal Railroad Administration, the National Transportation Safety Board and the Environmental Protection Agency all sent investigators. The EPA planned to gauge any contamination to waterways in the vicinity, spokesman Rich Mylott said.

Since 2006, the U.S. and Canada have seen at least 24 oil-train accidents involving a fire, derailment or significant amount of fuel spilled. Wednesday’s derailment comes after the Department of Transportation announced a rule Friday to toughen construction standards for tens of thousands of tank cars that haul oil and other flammable liquids.

The cars that derailed were constructed under a 2011 voluntary rail-industry standard intended to make them tougher than older cars that were long known to pose a safety risk. But the new cars, each carrying 30,000 gallons of fuel, have proved equally dangerous.

Roughly 22,000 of the cars are in service hauling crude oil.

Federal Railroad Administration Administrator Sarah Feinberg said the Heimdal accident was “yet another reminder” of the need for changes that have been resisted by the oil industry, which says it will take years to get the unsafe tank cars replaced or off the tracks.