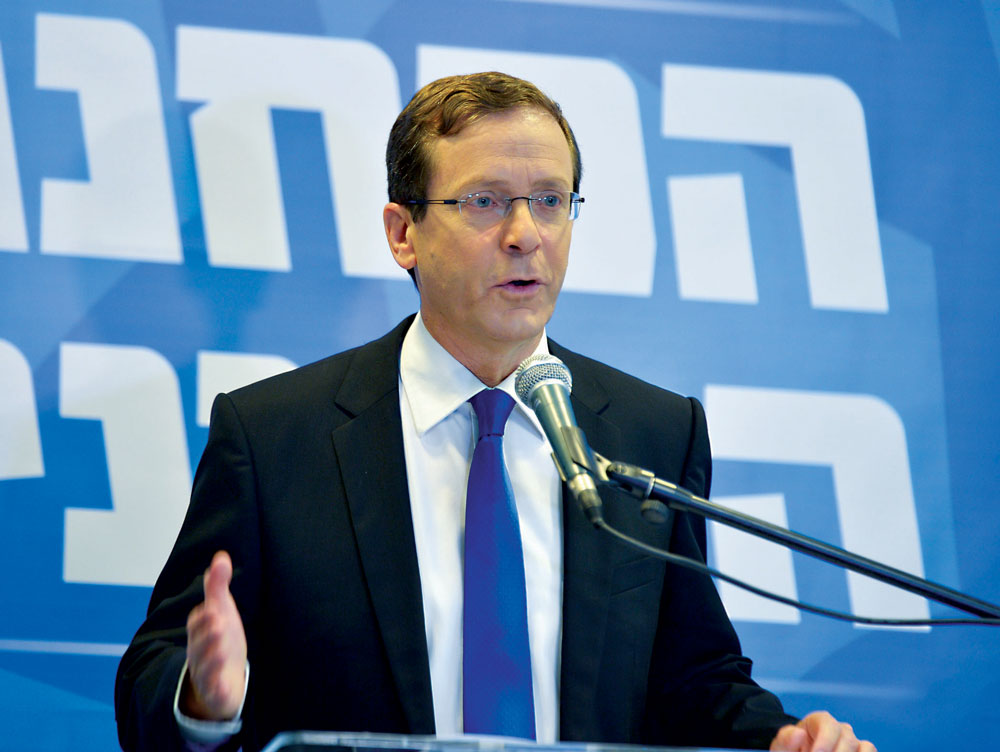 Zionist Camp leader Isaac Herzog buried all talk of a possible unity government once and for all on Thursday, as he declared war on the just-formed Netanyahu government.

Prior to the signing of coalition agreements on Wednesday night, Herzog told Israeli media that not only would he not join the coalition, but that he believes the prime minister should return his mandate to form a government to President Reuven Rivlin.

“61 is not a government,” he said of the 61-seat coalition. “It will hurt the population… and waste billions. It is dangerous.”

“We don’t have to say it every minute on every street corner,” he said. “I don’t have any intention nor did I have to be a fifth wheel in Netanyahu’s government. I intend to replace him.”

Yesh Atid chairman Yair Lapid said he would petition the High Court to block Netanyahu from appointing more than the 18 ministers currently permitted by law. He called Netanyahu’s attempts to increase the number of ministers “robbery in broad daylight.”

Netanyahu on Thursday instructed Likud MKs to be present in full force for a vote Monday on amending the Basic Law in order to increase the number of ministers in the cabinet.

Opponents of expansion say that it will cost tens of millions of shekels per year, since it means not only additional ministerial salaries, but also new offices, new staff, cars and drivers, security personnel and general office expenses.

The maximum number of ministers was trimmed to 18 in the last government, but Netanyahu wants to revive the former large cabinet size to make room for political appointees to satisfy his coalition partners and MKs from his own party.

All was not quiet within Netanyahu’s Likud party, either, on Thursday, as veteran Druze MK Ayoub Kara threatened to boycott the swearing-in ceremony in the Knesset next Wednesday, if he is not given a ministerial post.

“No one is talking to me, I have not been invited to a meeting regarding the possibility that I will be appointed minister,” Kara fumed.

“A government will not rise that ignores the thousands of Druze soldiers and officers deployed on the borders of Israel, who were hurt by the proposed ‘Jewish nation-state bill’ — we need to bring them back and keep them close, we need to them: ‘You are part of this country.’”

“The Druze were not born solely to make war, they were also born to sit at the cabinet table. And I say this, a government will not be formed that does not have a Druze minister — to pass a clear message that we are an integral part of this country; we want this.”

The 60-year-old Kara, a four-term MK, served as deputy Knesset speaker and on the Finance Committee and the Education Committee. In 2009, he was made Deputy Minister of the Development of the Negev and Galil.

Meanwhile, Jewish Home was still sorting out its affairs on Thursday after the exhausting last-minute negotiations that brought them into the coalition.

Party officials denied reports that MK Rabbi Eli Ben Dahan will be the choice for Deputy Defense Minister, and that MK Nissan Slomiansky will head the Knesset’s Committee for Law, Constitution and Justice.

“The internal division of duties within the Jewish Home has not yet been decided (except for the posts of ministers, of course),” said the party spokesman.

“All publications on the matter are baseless,” he added. Decisions will be made on Sunday.”

Earlier in the day, MK Yinon Magal (Jewish Home) said that Dahan would be the next Deputy Defense Minister. “He is the next in line in the list [after Bennett, Ariel and Shaked],” he explained. “It is the most legitimate and the most proper thing.”