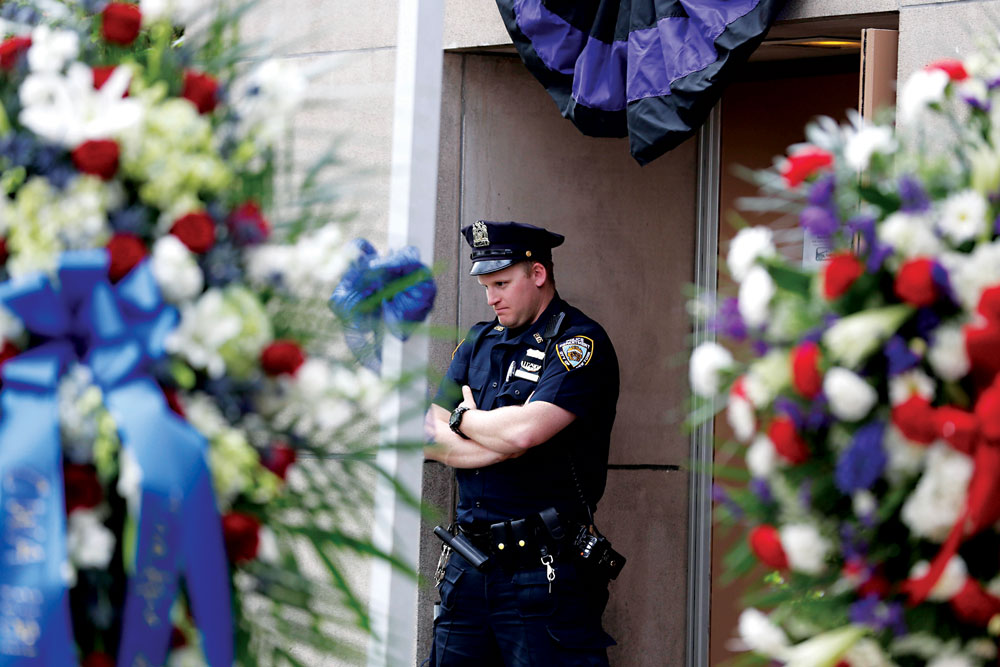 The body of a New York City police officer who died after being shot in the head was accompanied by a dozen police vehicles and saluted by officers looking on as it was taken to a Long Island funeral home on Tuesday.

About 50 people, including colleagues from Officer Brian Moore’s Queens precinct, waited as a procession carrying his body arrived at the funeral home in Bethpage, on Long Island. The 25-year-old Moore died Monday, two days after he was shot as he stopped a man suspected of carrying a handgun. He had been in a coma after undergoing brain surgery.

Two dozen officers saluted at Moore’s body was brought into the funeral home on a wheeled cot. As the cot was led back out, Moore’s partner, Officer Erik Jansen, hung his head. Fellow officers hugged Jansen outside of the funeral home.

“If you found out Brian’s going to be somewhere, you want to be there because you want to be around him,” said Pat Davis, 27, a friend of Moore’s. “He was just the greatest guy. He was like a brother to me.”

Kathleen Kearns, 50, of Bethpage, dropped off a bouquet of flowers at Moore’s home in Massapequa on Tuesday.

“I didn’t know him, but I’m from the neighborhood,” she said. “It’s just horrific. It’s heartbreaking and I just can’t imagine what the family is going though. The cops nowadays have a tougher time than ever. It’s a shame. He was a young guy and he shouldn’t be gone.”