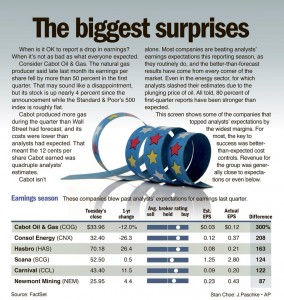 Crude oil climbed above $60 a barrel for the first time this year, raising expectations for rising inflation and interest rates. Greece’s government remained in a standoff with its European creditors as a debt payment looms next week.

“There are some jitters,” said Bill Stone, chief investment officer at PNC Asset Management Group. “Greece is definitely part of it. The other part is oil prices going up. That implies more inflation.”

Major indexes wavered at the outset of trading, drifted lower throughout the morning, then spent the afternoon slowly ceding ground.

The price of oil jumped $1.47 to close at $60.40 a barrel, the first time crude has traded that high since early December, following reports that a Libyan oil terminal had closed. Brent crude rose $1.07 to $67.52 in London.

An impasse in talks between Greece and its lenders raised concerns about the country’s ability to handle an upcoming debt payment. Greece will have to scrounge for cash to make a payment of 750 million euros (the equivalent of $840 million) to the International Monetary Fund due on May 12.

Among companies turning in results on Tuesday, Kellogg reported that its quarterly earnings slumped 44 percent as a rising U.S. dollar took a bite out of sales. The maker of Frosted Flakes and Pop Tarts fell 95 cents, or 1 percent, to $63.18.

Walt Disney’s stock hit an all-time high after it delivered quarterly results that beat Wall Street’s estimates, thanks, in part, to rising revenue from its Walt Disney World Resort and other theme parks.  Disney’s stock gave up its early gain and ended the day slightly lower, down 22 cents at $110.81.

The first-quarter earnings season has given investors little to celebrate, said Tim Dreiling, a senior portfolio manager at a division of U.S. Bank Wealth Management. Roughly seven out of every 10 companies in the S&P 500 have reported results that beat analysts’ estimates for quarterly profit, according to S&P Capital IQ. Yet more than half have fallen short of revenue targets. “That’s what is concerning,” Dreiling said.

The Shanghai Composite Index in mainland China had its worst day in months, losing 4.1 percent, in turn dragging down Hong Kong’s Hang Seng 1.3 percent. Markets in Japan, South Korea and Thailand were shut.

Back in the U.S., government bond prices fell, nudging the yield on the 10-year Treasury note up to 2.18 percent from 2.15 percent the day before.

In other trading on the New York Mercantile Exchange: