Israel Israeli Coalition Talks Go Down To the Wire
Israel 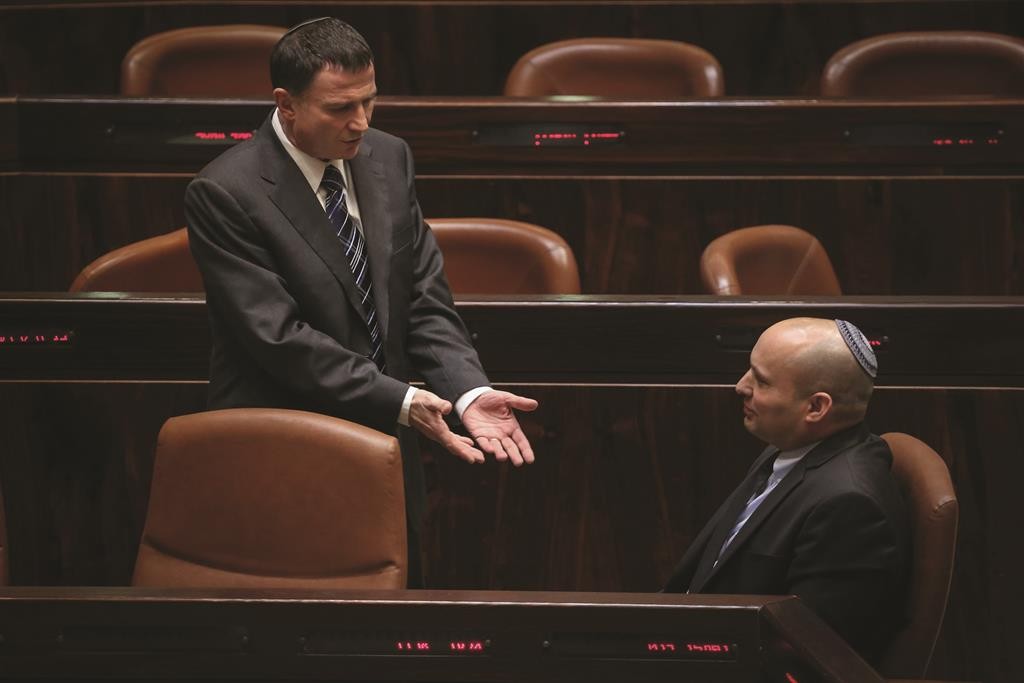 The Jewish Home party was the first to endorse Prime Minister Binyamin Netanyahu for re-election, but as of Tuesday night the question was whether it would be the last to join the coalition — or would choose to sit in the opposition.

Naftali Bennett reportedly told Likud that if MK Ayelet Shaked of Jewish Home were not given the Justice Ministry, there would be no deal. Should that happen, Netanyahu will be short of the majority needed to form a government, and President Reuven Rivlin would have to decide whether to ask Zionist Camp leader Isaac Herzog and Tzipi Livni to form a government. The deadline is midnight Wednesday night.

As the clock ticked on Tuesday, Likud officials were beside themselves with incredulity and anger.

“I call on Bennett to join the government immediately and allow the establishment of a nationalist government,” said senior Likud MK Miri Regev. “It’s time to start working and stop playing games.”

“It is inconceivable that Bennett will be the one to prevent a nationalist and right-wing government,” she added. “If we have to go to the polls, I have no doubt the medium and small parties will pay the price. Even the public is tired of the games against the party that won 30 seats,” she added, referring to the Likud electoral tally. Jewish Home wound up with only 8.

“The responsibility for [the establishment] of a nationalist government  is “on Bennett’s shoulders,” Likud coalition negotiator David Shimron said. “He got very generous offers.”

Jewish Home has reportedly been offered the Education, Agriculture, Culture-Sport and Diaspora ministries. The negotiating process has been a series of disappointments for Bennett, who initially had sought either Defense or Foreign Affairs for himself, but was refused both after a poor showing in the elections that left him with diminished leverage.

On Monday, Shas won the Religious Affairs Ministry, which Jewish Home had wanted. After Foreign Minister Avigdor Lieberman announced that he was not entering the coalition, Bennett apparently decided that Likud could not refuse his demand for the Justice Ministry, since it would mean the coalition would evaporate.

Dani Dayan, a former head of the Yesha Council who withdrew his name from the Jewish Home list after getting an unrealistic spot in the primaries, said it was time to compromise.

“In the situation we’ve encountered today there’s nothing to be done but to regain one’s composure, to drink a glass of water, and to sign on the coalition agreement,” Dayan told Army Radio.

“It cannot be that Jewish Home makes the establishment of the government fail,” he said.

The Likud was apparently caught off guard by Lieberman’s decision to remain outside the coalition. Party sources were quoted as saying that they had assumed Lieberman’s Yisrael Beiteinu would be in the coalition, that he was just stalling for a better deal, but that being opposition partner with the center-left was not a viable option for the outspoken nationalist.

Even if the impasse with Jewish Home is broken before the deadline, the result would be a narrow coalition majority of only 61, with which it would be difficult to govern.

“A coalition of 61 is an impossible coalition,” said one Likud source. “It would be enough for Uri Ariel and Bezalel Smotrich of Tekuma [a faction within Jewish Home] to decide to flex their muscles, and the government would fall.”

“It is difficult for me to analyze this step,” Edelstein told Army Radio. “I am searching for an answer to the question of why it is happening, and cannot find one. One can be unhappy about something in the basic guidelines of the government that is forming, but even if one says that this is not a natural grouping, a natural government and a natural coalition, I think Yisrael Beitenu belongs to the government in formation much more than to Meretz or the Joint [Arab] List.”

In his announcement on Monday, Lieberman gave a number of reasons for the move — concessions to chareidim, lack of commitment to building in Yehudah and Shomron, lack of resovle to defeat Hamas, and more. But none of them seemed to justify the decision.

According to Israel Hayom, a Likud official called Lieberman’s attacks regarding concessions Netanyahu made to the chareidi coalition partners “baseless.”

After all, he said, Yitzhak Herzog also agreed to give the chareidim the same things, and even Yesh Atid head Yair Lapid, said he would join a government with charedim.

“The coalition will expand, in my opinion, with the Zionist Union,” Gafni told Army Radio. “There is no doubt about that.”