In the Face of IS Successes, Al-Qaida Adapts, Grows Stronger 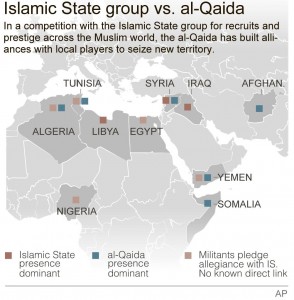 When al-Qaida overran the Yemeni port city of Mukalla last month, the group’s commanders immediately struck a deal to share power with the area’s tribesmen. No jihadi banners were raised. Al-Qaida even issued a statement denying rumors that it had banned music at parties. A local tribal council now administers the city.

The approach was a stark contrast to al-Qaida’s rival, the Islamic State group, notorious for its savagery. In a competition with the Islamic State group for recruits and prestige across the Middle East, al-Qaida has sought to distinguish itself from its rival’s bloodthirstiness, taking an approach that in jihadi circles would be considered pragmatic. It is building alliances with local players, even old enemies, to seize new territory. Its leader, Ayman al-Zawahri, has told his followers to avoid IS-style brutalities against civilians in order to build support among local populations.

The strategy has paid off, winning new gains for al-Qaida. In Yemen, it even stands to emerge as the real winner as Saudi Arabia leads an Arab air campaign targeting the terror network’s rival, the Iranian-backed Shiite rebels known as Houthis who have taken over much of the country.

Al-Qaida “is the future Trojan horse,” warned a senior Yemeni military intelligence officer, Ali Sharif. When the war is over and leaves a security vacuum, he said, “the role of al-Qaida will come. … They will fill it and take control.”

While the U.S. and the West might hope that competition between the two groups would weaken two major terrorist threats, each is maneuvering to benefit from the region’s turmoil.

Islamic State’s gains have been sizeable. For nearly two decades, al-Qaida was unchallenged as the world’s most prominent terrorist organization.

This article appeared in print on page 3 of the May 5th, 2015 edition of Hamodia.