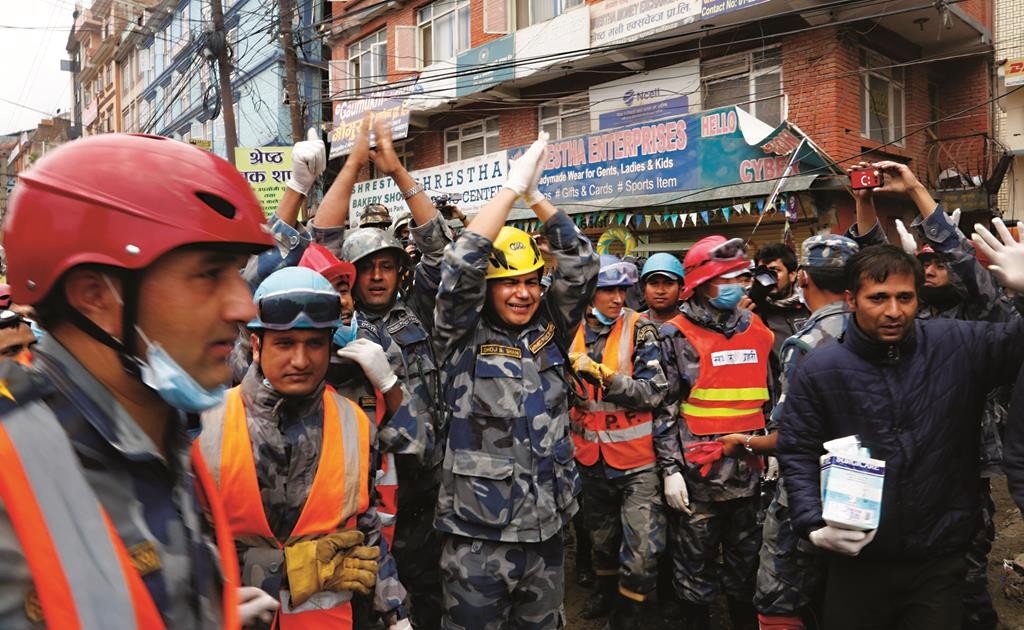 Rescues made 5 days after quake

The 15-year-old boy had been buried alive under the rubble of this quake-stricken capital for five days, listening to bulldozers clearing mountains of debris, fearful that the incessant aftershocks might finally collapse the darkened crevice he was trapped in.

And then, “all of the sudden I saw light,” Pempa Tamang said, recounting the moment Thursday he was pulled from a hole at the bottom of what was once a seven-story building in Kathmandu.

Tamang did not know whether he was alive or dead. “I thought I was hallucinating,” he said.

The improbable rescue was an uplifting moment in Nepal, which has been overwhelmed by death and destruction since the 7.8-magnitude earthquake hit Saturday.

By late Thursday, the government said the toll from the tremor, the most powerful recorded here since 1934, had risen to 6,130 dead and 13,827 injured.

After night fell, police reported another dramatic rescue: A woman in her 20s, Krishna Devi Khadka, was pulled from a building in the same neighborhood as Tamang near Kathmandu’s main bus terminal, according to an officer who spoke on condition of anonymity because he wasn’t authorized to talk to the media.

The rescue of a four-month-old baby boy, Sonit Awal, was another  heartening moment in Thursday’s rescue efforts.  These moments are oases of joy.

“Life has become a struggle to survive. It gives us hope,” said Hans Raj Joshi, who watched Tamang’s rescue. “We thought they were only bringing out the dead. It’s hard to believe people are still alive.”

When Tamang was finally extricated, rescue workers inserted an IV in his arm, propped him onto a yellow plastic stretcher — the same kind that has helped convey countless dead — and carried him through the ruins on their shoulders as if he was a newly crowned king.

Lines of police stood on both sides, keeping back mobs of bystanders and journalists. A dazed Tamang blinked at the bright sky. When the procession turned a corner and entered the main road outside, there was a sound Kathmandu hadn’t heard in days: the jubilant cheers of thousands of ecstatic onlookers.

Life in Nepal, however, is far from normal. More than 70 aftershocks have been recorded in the Himalayan region by Indian scientists in the past five days, according to J.L. Gautam, the director of seismology at the Indian Meteorological Department in New Delhi.

Shortages of food and water and worry over the fate of relatives have triggered an exodus from the capital, prompting thousands to board buses provided by the government to their rural hometowns.

Although small shops have begun reopening, and the once ubiquitous tent cities have begun thinning out, an air of desperation remains. “We’re still feeling aftershocks. It still doesn’t feel safe,” said Prabhu Dutta, a 27-year-old banker from Kathmandu.

At the Israeli field hospital, doctors X-rayed Tamang and injected him with glucose. Lt. Libby Weiss of the Israeli Defense Forces said he was dehydrated but lucid and “in remarkably good shape,” with no other injuries except scratches.

“It’s a miracle,” Weiss said. “I think it’s an amazing thing to see in the midst of all this calamity.”