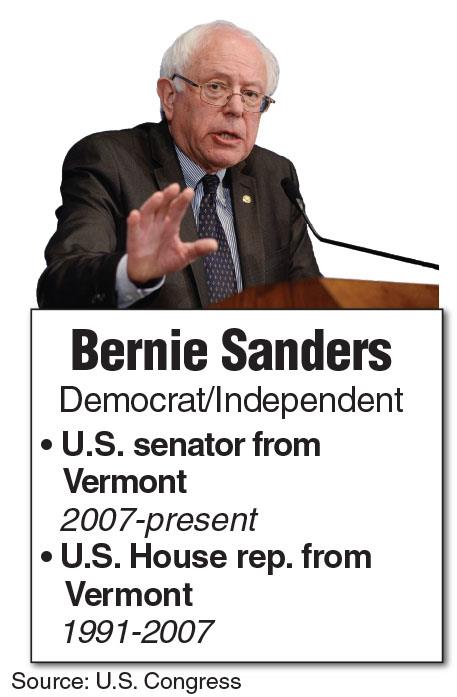 Day-old presidential contender Bernie Sanders said Thursday that questions about the Clinton Foundation’s activities are fair game in the race for the Democratic nomination, and noted that Hillary Rodham Clinton has yet to take a position on contentious trade legislation and the proposed Keystone XL Pipeline.

At a news conference with the U.S. Capitol as a backdrop, the independent senator from Vermont said creating “an economy that works for all of our people” would be at the center of his campaign for the Democratic nomination. “The wealthiest people in the country and the largest corporations” must stop shipping jobs overseas and start paying their fair share of taxes, he said.

He spoke not long after filing papers for his launch. Sanders said he remains a political independent, but drew a welcome to the race from Florida Rep. Debbie Wasserman Schultz, head of the Democratic National Committee. “Sanders has clearly demonstrated his commitment to the values we all share as members of the Democratic Party,” she posted online.

He is the first major challenger to enter the race against Clinton, who launched her own bid for president earlier this month and is the heavily favored, early front-runner in the Democratic contest. Former Maryland Gov. Martin O’Malley and former Virginia Sen. Jim Webb are potential contenders, and ex-Rhode Island Gov. Lincoln Chafee recently said he intends to run.

Once known as a socialist mayor of Burlington, Vt., Sanders is a native of Brooklyn with an accent to match. The 73-year-old veteran lawmaker said he has never run a negative commercial, implying he won’t this time, either. Yet he said, “We’re in this race to win,” and pledged a vigorous debate on the issues with Clinton, a former first lady, senator and secretary of state.