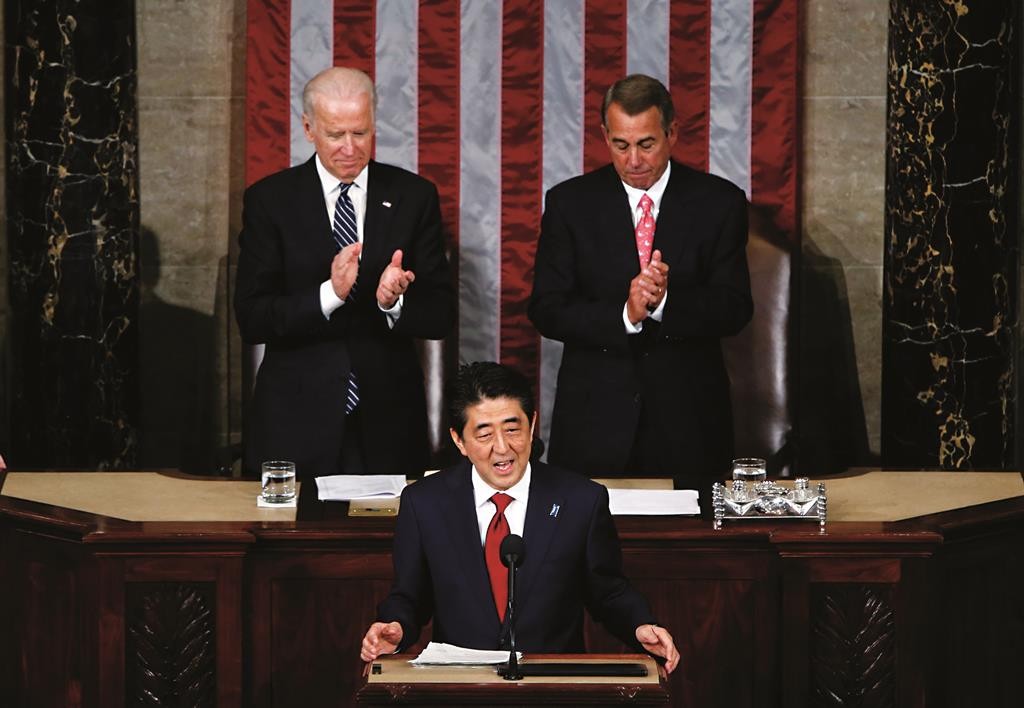 Prime Minister Shinzo Abe offered condolences Wednesday for Americans killed in World War II in the first address by a Japanese leader to a joint meeting of Congress, but stopped short of apologizing for wartime atrocities.

Abe came to Capitol Hill after a morning visit to a Washington memorial to more than 400,000 American service members who died in the conflict. His remarks to a packed chamber a day after meeting President Barack Obama were warmly received by lawmakers.

“My dear friends, on behalf of Japan and the Japanese people, I offer with profound respect my eternal condolences to the souls of all American people that were lost during World War II,” he said, prompting his audience to rise in applause.

Since winning election in December 2012, Abe has been strong advocate of closer ties with the U.S., a message he hammered home Wednesday. He vowed to enact legislation by this summer to facilitate closer cooperation with the U.S. military, in support of new U.S.-Japan defense guidelines endorsed by the two leaders on Tuesday.

Abe said the U.S. and Japan “must take the lead” in completing a 12-nation trans-Pacific trade pact. That got a lukewarm response from Democrats but warm applause from Republicans — reflecting the division in Congress on the issue.

Abe arrived amid a bruising battle in Washington over legislation that would give Obama the authority to negotiate the Trans-Pacific Partnership, or TPP, a cornerstone of his second-term agenda. In a reversal of politics-as-usual, it’s Obama’s own Democratic base that opposes him, and Republicans who support the deal.

“The TPP goes far beyond just economic benefits. It is also about our security. Long-term, its strategic value is awesome. We should never forget that,” Abe said.

The Japanese leader is a firm supporter of a stronger U.S. presence in the region, both militarily and economically, as China, which in recent years has eclipsed Japan as the world’s second-largest economy, asserts itself as a global power.

He’s taken some political hits at home for pushing the trade pact and for loosening the restrictions of Japan’s pacifist constitution to open the way for Japan’s military to take a more active supporting role to the United States, which has nearly 50,000 troops based there.

Dozens of Japanese leaders have visited the U.S. since the war, but Abe’s invitation to speak to Congress sets him apart from his predecessors.