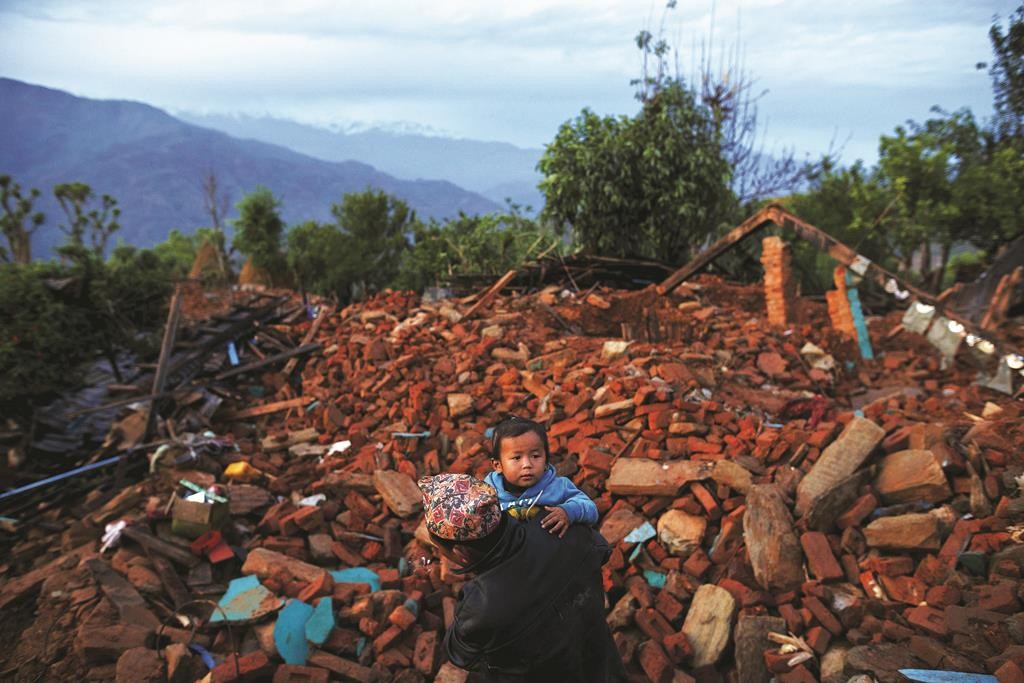 People stranded in remote villages and towns across Nepal were still waiting for aid and relief to arrive on Tuesday, four days after a devastating earthquake destroyed buildings and roads and killed more than 4,600 people.

The government has yet to assess the full scale of the damage wrought by Saturday’s 7.9 magnitude quake, unable to reach many mountainous areas despite aid supplies and personnel pouring in from around the world.

Prime Minister Sushil Koirala told Reuters the death toll could reach 10,000, as information on damage from far-flung villages and towns has yet to come in.

That would surpass the 8,500 who died in a 1934 earthquake, the last disaster on this scale to hit the Himalayan nation.

“The government is doing all it can for rescue and relief on a war footing,” Koirala said. “It is a challenge and a very difficult hour for Nepal.”

Experts said the chance of finding people alive in the ruins was slim more than four days after disaster struck.

“After the first 72 hours the survival rate drops dramatically and we are on day four,” said Wojtek Wilk of the Polish Center for International Aid, an NGO which has six medical staff and 81 firefighters in Nepal. “On the fifth day it’s next to zero.”

In a rare glimmer of hope, a Nepali-French rescue team pulled a 28-year-old man, Rishi Khanal, from a collapsed apartment block in Kathmandu after he had spent around 80 hours trapped in a room with three dead bodies.

In Jharibar, a village in the hilly Gorkha district of Nepal close to the quake’s epicentre, Sunthalia was not so lucky.

Her husband away in India and with no help in sight, she dug for hours in the rubble of her collapsed home on Saturday to recover the bodies of two of her children, a 10-year-old daughter and eight-year-old son.

In Barpak, further north, rescue helicopters were unable to find a place to land. On Tuesday, soldiers had started to make their way overland, first by bus, then by foot.

Army helicopters also circled over Laprak, another village in the district best known as the home of Gurkha soldiers.

A local health official estimated that 1,600 of the 1,700 houses there had been razed. Helicopters dropped food packets in the hope that survivors could gather them up.

In Sindhupalchowk, about 3.5 hours by road northeast of Kathmandu, the earthquake was followed by landslides, killing 1,182 people and seriously injuring 376. A local official said he feared many more were trapped and more aid was needed.

“There are hundreds of houses where our people have not been able to reach yet,” said Krishna Pokharel, the district administrator. “There is a shortage of fuel, the weather is bad and there is not enough help coming in from Kathmandu.”

International aid has begun arriving in Nepal, but disbursement has been slow, partly because aftershocks have sporadically closed the airport.

According to the home (interior) ministry, the confirmed death toll stands at 4,682, with more than 9,240 injured.

Nepal’s most deadly quake in 81 years also triggered a huge avalanche on Mount Everest that killed at least 18 climbers and guides, including four foreigners, the worst single disaster on the world’s highest peak.

A series of aftershocks, severe damage from the quake, creaking infrastructure and a lack of funds have complicated rescue efforts in the poor country of 28 million people sandwiched between India and China.

In Kathmandu, youths and relatives of victims were digging into the ruins of destroyed buildings and landmarks.

“Waiting for help is more torturous than doing this ourselves,” said Pradip Subba, searching for the bodies of his brother and sister-in-law in the debris of Kathmandu’s historic Dharahara tower.

The 19th century tower collapsed on Saturday as weekend sightseers clambered up its spiral stairs. Scores of people were killed when it crumpled.

Elsewhere in the capital’s ancient Durbar Square, groups of young men cleared rubble from around an ancient temple, using pickaxes, shovels and their hands. Several policemen stood by, watching.

In the capital, as elsewhere, thousands have been sleeping on pavements, roads and in parks, many under makeshift tents.

Hospitals are full to overflowing, while water, food and power are scarce.

There were some signs of normality returning on Tuesday, with fruit vendors setting up stalls on major roads and public buses back in operation.

Officials acknowledged that they were overwhelmed by the scale of the disaster.