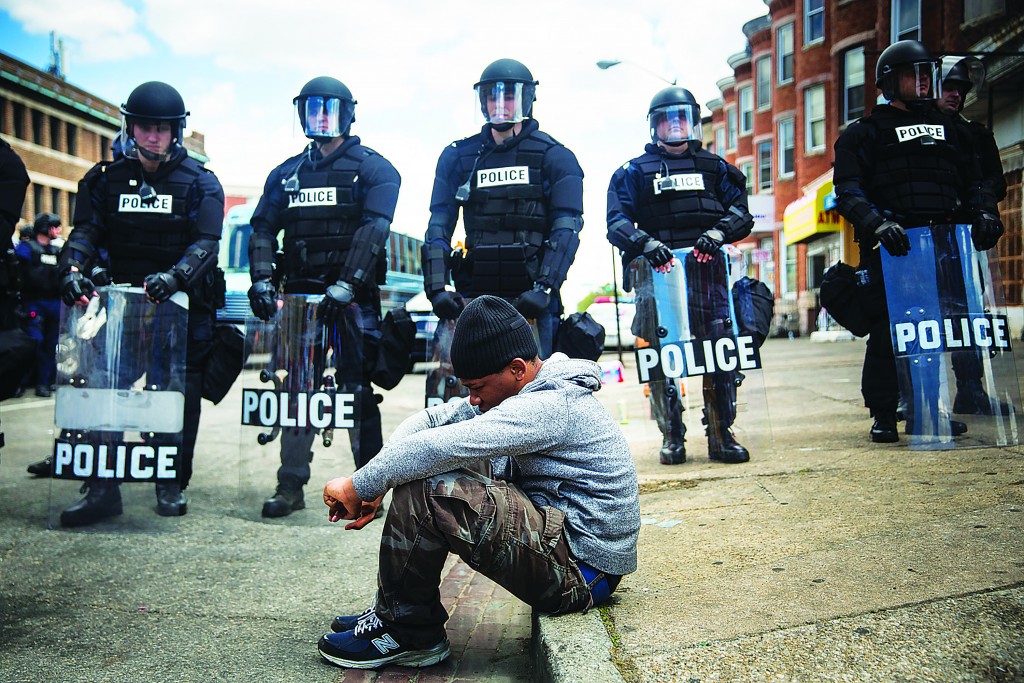 Baltimore was a city on edge Tuesday as hundreds of National Guardsmen patrolled the streets against unrest for the first time since 1968, hoping to prevent another outbreak of rioting.

Maryland’s governor vowed there would be no repeat of the looting, arson and vandalism that erupted Monday in some of the city’s poorest neighborhoods and sent a shudder through all of Baltimore.

Hundreds of State Police troopers and law officers from outside Baltimore poured into the city to help keep the peace.

The streets were largely calm in the morning and into the afternoon. But a state of emergency remained in effect, with the city under a 10:00 p.m. to 5:00 a.m. curfew. All public schools were closed. And the Baltimore Orioles canceled their Tuesday night game at Camden Yards.

The looting and rock- and bottle-throwing by mostly black rioters broke out just hours after the funeral of Freddie Gray, a 25-year-old black man who suffered a fatal spinal cord injury while in police custody. It was the worst such violence in the U.S. since the unrest that erupted last year over the death of Michael Brown, the unarmed black 18-year-old shot by a white police officer in Ferguson, Missouri.

Political leaders and residents called the violence a tragedy for the city and lamented the damage done by the rioters to their own neighborhoods.

“It’s disruption of a community. The same community they say they care about, they’re destroying. You can’t have it both ways,” Mayor Stephanie Rawlings-Blake said.

But the vandalism also brought out a sense of civic pride and responsibility among many Baltimore residents, with hundreds of volunteers turning out to sweep the streets of glass and other debris with brooms and trash bags donated by hardware stores.

With schools closed, Blanca Tapahuasco brought her three sons, ages two to eight, from another part of the city to help clean up the brick-and-pavement courtyard outside a looted CVS pharmacy in the hard-hit neighborhood where Gray was arrested.

“We’re helping the neighborhood build back up,” she said. “This is an encouragement to them to know the rest of the city is not just looking on and wondering what to do.”

CVS store manager Haywood McMorris said the destruction didn’t make sense: “We work here … This is where we stand, and this is where people actually make a living.”

As the day wore on, police fielded rumors of would-be rioters gathering at various places in and around Baltimore, but as of late afternoon, only a few scattered arrests were reported.

The street corner where some of the worst violence occurred resembled a street festival more than anything else. Musicians played in the intersection, surrounded by an appreciative crowd, street vendors hawked bottles of water, and the 1,000 or so people largely ignored the line of police in riot gear stretched across West North Avenue.

“We’re not going to have another repeat of what happened last night,” Maryland Gov. Larry Hogan said after a visit to a West Baltimore neighborhood where cars were burned and windows smashed. “We’re going to make sure we get Baltimore back on track.”

The crisis marks the first time the National Guard has been called out to deal with unrest in Baltimore since 1968, when some of the same neighborhoods that rose up this week burned for days after the assassination of the Rev. Martin Luther King Jr. At least six people died then, and some neighborhoods still bear the scars.

Jascy Jones of Baltimore said the sight of National Guardsmen on the street gave her a “very eerie feeling.”

“It brought a tear to my eye. Seeing it doesn’t feel like the city that I love,” she said. “I am glad they’re here, but it’s hard to watch.”

At the White House, President Barack Obama called the deaths of several black men around the country at the hands of police “a slow rolling crisis.” But he added that there was “no excuse” for the violence in Baltimore, and said the rioters should be treated as criminals.

The uprising started in West Baltimore on Monday afternoon and by midnight had spread to East Baltimore and neighborhoods close to downtown and near the baseball stadium.

At least 20 officers were hurt, one person was critically injured in a fire, more than 200 adults and 34 juveniles were arrested, and nearly 150 cars were burned, police said.

“They just outnumbered us and outflanked us,” Baltimore Police Commissioner Anthony Batts said.

The governor had no immediate estimate of the damage.

Maryland National Guard spokesman Lt. Charles Kohler said that about 2,000 members would be deployed through the day and that the force could build to 5,000.

Also, State Police said they were putting out a call for up to 500 additional law enforcement officers from Maryland and as many as 5,000 from around the mid-Atlantic region.

The violence set off soul-searching among community leaders and others, with some suggesting the uprising was about more than race or the police department — it was about high unemployment, high crime, poor housing, broken-down schools, and lack of opportunity in Baltimore’s inner-city neighborhoods.

The city of 622,000 is 63 percent black. The mayor, state’s attorney, police chief and City Council president are black, as is 48 percent of the police force.

“You look around and see unemployment. Filling out job applications and being turned down because of where you live and your demographic. It’s so much bigger than the police department,” said Robert Stokes, 36, holding a broom and a dustpan on a corner where some of the looting and vandalism took place.

He added: “This place is a powder keg waiting to explode.”

In the aftermath of the riots, state and local authorities found themselves facing questions about whether their initial response was adequate.

The mayor waited hours to ask the governor to declare a state of emergency, and the governor hinted she should have come to him earlier.

“We were trying to get in touch with the mayor for quite some time,” Hogan said. “She finally made that call, and we immediately took action.”

Rawlings-Blake said officials initially thought they had gotten the unrest under control.

Gray was arrested April 12 after running away at the sight of police, authorities said. He was held down, handcuffed and loaded into a police van. Leg cuffs were put on him when he became irate inside. He died a week later.

Authorities said they are still investigating how and when he suffered the spinal-cord injury — during the arrest or while he was in the van, where authorities say he was riding without being belted in, a violation of department policy.

Six officers have been suspended with pay in the meantime.