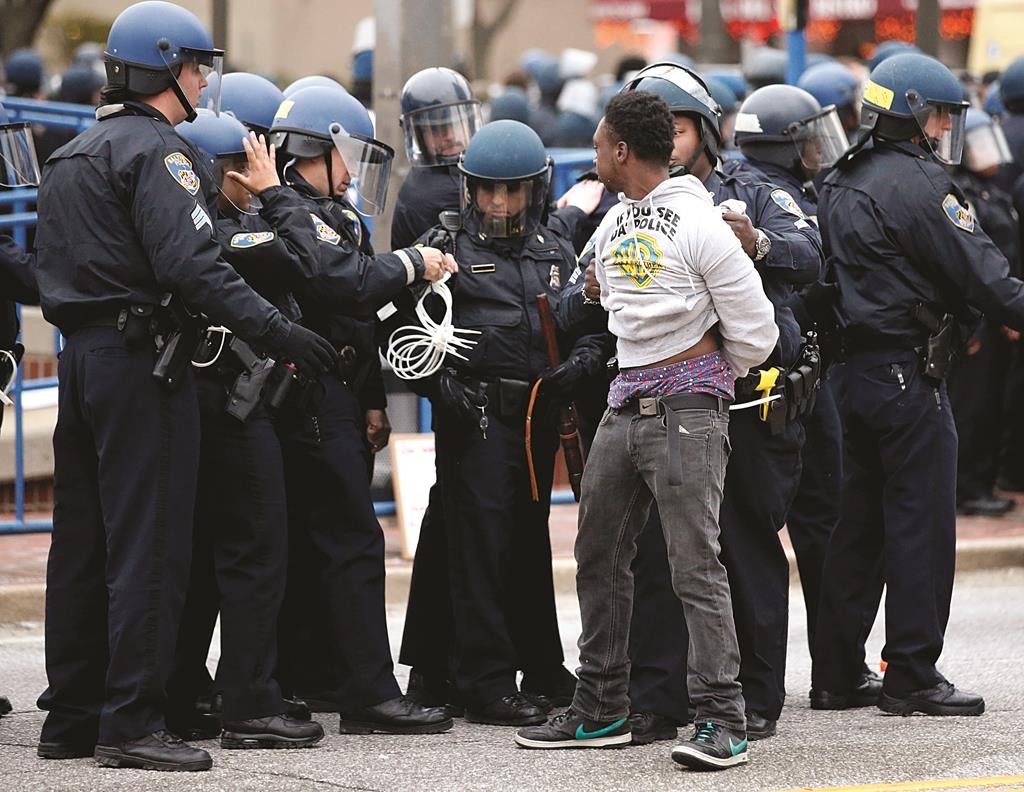 A night of violence gave way to a day of mourning Sunday for a man who died after sustaining serious injuries while in the custody of Baltimore police.

Freddie Gray, a 25-year-old black man, died a week after an encounter with police left him with grave spinal injuries. Gray’s funeral is planned for Monday.

Some 34 people were arrested on Sunday as services proceeded, according to Baltimore Police Department, and six police officers sustained minor injuries.

Roughly 1,200 protesters gathered at City Hall on Saturday afternoon, officials said, to protest Gray’s death, which has prompted near-daily demonstrations since he died April 19. Gray was arrested one week before that when officers chased him through a West Baltimore neighborhood and dragged him into a police van.

However, a smaller group splintered off and looted a convenience store and smashed storefront windows. A protester tossed a flaming metal garbage can toward a line of police officers in riot gear as they tried to push back the crowd. Earlier, a group of protesters smashed the windows of at least three police cars.

Rep. Elijah Cummings, a long-time congressman who represents Baltimore’s 7th District, told CBS on Sunday that there is deep frustration over the case.

“Mr. Gray died a week ago. And I think the thing that upset so many people was the fact that here’s a young man. We still don’t know exactly why he was arrested,” Cummings said. “We do know that he was hollering out for aid. He was not given aid after being arrested.

Police acknowledged Friday that Gray should have received medical attention at the spot where he was arrested — before he was put inside a police transport van handcuffed and without a seat belt, a violation of the Police Department’s policy.

Gray was arrested after he made eye contact with officers and ran away, police said. Officers held him down, handcuffed him and loaded him into the van. While inside, he became irate and leg cuffs were put on him, police have said.

Gray asked for medical help several times, beginning before he was placed in the van. After a 30-minute ride that included three stops, paramedics were called.