War Rages on in Yemen Despite Saudis’ Vow to Ease Airstrikes 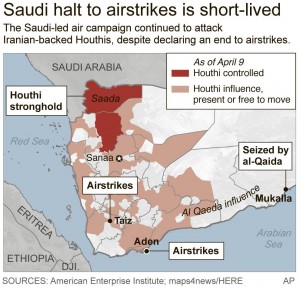 A scaling-back of the Saudi Arabia-led air war brought some relief Wednesday to residents of Yemen’s capital, but intensive bombardment continued in the city of Taiz, and street fighting raged in the port of Aden, the country’s commercial center.

The warring parties in Yemen — Shiite Muslim rebels known as Houthis, defectors from the armed forces who joined the insurgents, and forces loyal to exiled President Abed Rabbo Mansour Hadi — pressed ahead with battles despite calls for a political solution to the conflict.

The fighting over the last month has killed nearly 1,000 people across Yemen, according to the World Health Organization, with about three times as many people injured.

Saudi Arabia launched its air offensive nearly a month ago with the stated aim of stemming the Houthi offensive. With criticism of the campaign mounting along with civilian deaths and injuries, the kingdom indicated Tuesday that it would reduce, but not halt, bombardment, and would continue to move militarily against the insurgents using other means.

But despite Riyadh’s claim of success in the first phase of its military operation, the rebels and their allies continued to make gains.

Hours after the Saudi announcement, the insurgents captured a military base from Hadi loyalists in Taiz, officials said, triggering a wave of airstrikes.

In Aden and elsewhere in the country’s south, rebels and pro-Hadi forces battled each other using heavy weaponry in populated areas. Aden and surrounding areas are taking the brunt of the humanitarian disaster that has built up in recent weeks, with food, fuel and medical supplies running low.

In Sanaa, which was overrun by the insurgents months ago, Houthis organized large street demonstrations Wednesday denouncing the Saudi-led bombing campaign, which has received logistical support from the United States. Many in the capital, even those who oppose the Houthis, are furious at both Riyadh and Washington.

A naval blockade enforced by coalition warships and the United States is aimed at preventing Iranian weapons deliveries to the Houthis. Tehran denies arming the rebels, who belong to the Shiite offshoot Zaydi sect.

This article appeared in print on page 2 of the April 23rd, 2015 edition of Hamodia.