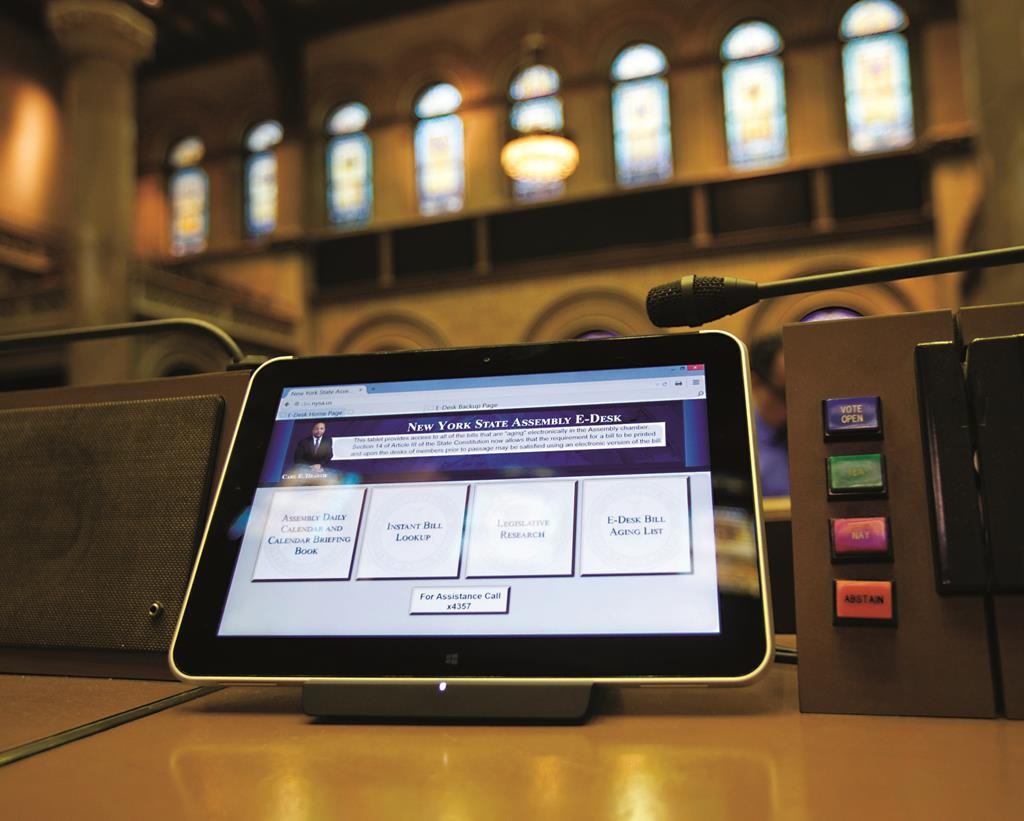 The Assembly part of New York’s legislature joined the digital age Wednesday, with all 150 desks in the ornate chamber getting brand new computer tablets to replace the foot-tall mounds of paper required until this year.

The tablets have four large boxes on the screens that legislators can touch to see their calendars, look up bills, research legislation and find out where a particular measure stands before it can be voted on.

Assembly Speaker Carl Heastie noted that the move, approved by voters in a referendum last November, will save paper and money.

“It seems to be working,” Assemblyman James Tedisco said, giving his tablet a test run. A longtime advocate for the change, he commended the feature that lets him look up every existing state law from his desk and noted that the computer wasn’t set up for texting, browsing social media or other distractions.

Binders with paper copies of the bills were also set on the desks before the Assembly convened Wednesday. That will continue through the end of the legislative session in June so they have a backup in case of technical glitches, Tedisco said.

Down the hall in the Capitol, the ornate Senate chamber still had only the fat binders of paper on its 63 lawmakers’ desks. The computer wiring is in place, iPads and other hardware have been ordered, and the computers should be up and running in May, a spokesman said.

Tedisco, a Schenectady County Republican, moved on Wednesday to advocate that legislators save more trees and tax dollars and put an end to constituent mailers.

Assembly members get about $39,000 each annually for legislative postage and printing, often meaning thousands of pieces of direct mail that look like campaign ads. Saying he hasn’t sent bulk mail like that since 2010, Tedisco has begun advocating “tweet and meet” instead, using email, social media and seeing constituents in public places.