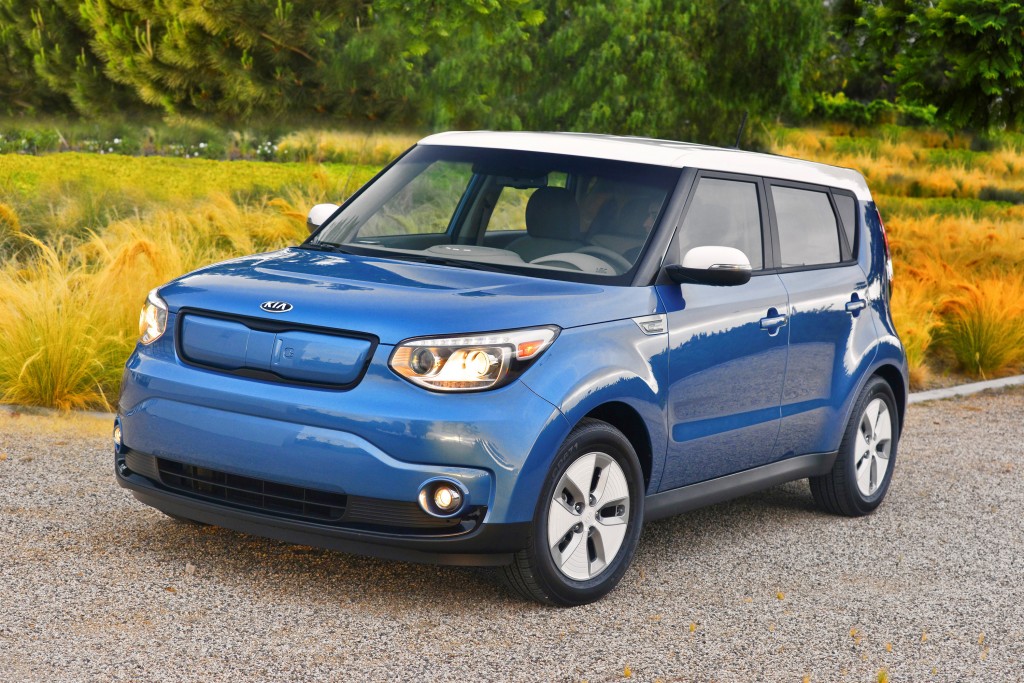 I’ve been driving a 2015 Kia Soul Electric Vehicle all week, and I’m so full of electrons — or something — that I figure I must be transmitting a dozen different rays.

Yet no modern car is more likely to leave you stranded than some Sparky with its limited range. I remain conflicted about them.

So that’s the baggage I recently loaded into my Carribean Blue Soul EV, a quirky crossover I really like when it packs pistons and spark plugs under the hood.

As you probably know, manufacturers have no choice but to keep developing electric vehicles if they have any hope of meeting future emissions and economy standards. Their biggest challenge will be selling them.

While the cars generally drive exceedingly well, they often cost at least $5,000 more than a similar gas-powered car and have to be recharged every couple of days.

Just for the record, the Soul EV — which admittedly offers lots of features — starts at $33,700, more than twice as much as a base gas-powered Soul.

And, by the way, if you forget to zap it one night and roll to a stop alongside the highway, no one can bring you a can of electricity.

You will officially be devoid of any Soul.

My Soul had a range of 93 miles, I’m happy to report, and Kia claims that it can go farther between charges than any other mainstream EV.

To Kia’s credit, the electric Soul doesn’t look much different from the lovably goofy gas-powered Soul.

Like all Souls, the EV was upright and hiply square. The sides looked as though they’d been cut from a smooth block of steel.

Slight flares gave the fenders a tiny bit of shape, but the crossover’s white top — like its sides — was flat as a kitchen table.

Up front, the one clue to the Soul’s inner energy was a solid grille that included a panel on the left side that popped open for recharging.

Besides the lack of an exhaust pipe in back, the EV’s only other external clue as to how it rolled was a set of EV-specific 16-inch wheels shod with smallish 205/60 tires.

Last year, Kia said the Soul EV would initially be sold only in California. But Kia announced last month that the EV will also be available in Texas, Georgia, Oregon, Washington and Hawaii beginning in June.

It may beckon to some buyers with its interior, which is considerably more upscale than the gas version of the Soul — in keeping with its lofty $36,625 window sticker.

Mine was pleasantly stitched in gray, with a padded hood over the instrument panel, a gray dashboard and even a classy matching gray headliner.

Though the EV had plenty of plastic inside, at least the shapes were interesting, and they were color-coordinated.

The swoopy door panels had light gray centers, while the gray leather seats sported perforated centers and blue piping on their edges.

Moreover, legroom and headroom felt more than adequate for me, which, I suppose, is sort of a half-recommendation.

It should work for most of you, though.

Still, at $35,000 or so, the Soul won’t be an easy sell. With gas at less than $3 a gallon, the huge premium for the electric version could fund nearly a decade of petrol.

But the EV is rated at the equivalent of 120 miles per gallon in town and is easy to live with — when you aren’t sweating recharges.

Powered by a 109-horsepower synchronous electric motor and 620 pounds of lithium-ion batteries, the Soul EV probably drives and rides better than the gas-powered version.

Getting started is a simple, drama-free affair. Push the start button, the lights come up on the dash and you move the conventional-looking shifter on the console to “drive.”

With just 109 horsepower and 210 pound-feet of torque to push 3,400 pounds, the front-wheel-drive EV steps away from stops all right — like all electrics — but maintains a leisurely pace from that point on.

Zero-to-60 takes 10.7 seconds, according to Car and Driver, which might be enough to barely beat a Smart car.

But the drive is smooth and silent, heightened some by the Soul’s solid, buzz-free interior.

Thanks to the 600 pounds of batteries lying beneath the floor, the EV even feels pretty good in corners, using its low mass to push through moderate-speed corners with relatively little lean.

That weight seemed to improve the Soul’s ride, as well, making it feel larger as it stepped confidently over bumps.

Also, the car’s steering was quick and nicely weighted, neither too heavy nor too light for the car. It added to the sense that I was driving something of substance.

Those good feelings, however, can fade pretty fast when you don’t have a full charge — a lesson in life, kids.

By the time the EV was delivered to me from the press fleet, it had 71 miles left in range.

I burned through another 17 miles driving around downtown and back to Chateau Box, leaving me with 54 miles.

Then I discovered that most electrical outlets in 60-year-old houses like mine aren’t grounded, and the Soul’s system won’t accept electricity from an ungrounded source.

So I limped back to the office, knowing that if I couldn’t find a convenient outlet there — which I did — I would have to park the Soul. With the range down to about 35 miles, I wouldn’t have had enough juice to drive home and back again.

And that’s why I wouldn’t own an electric vehicle today.

Their technology is highly advanced and refined. But with their limited range and few public charging stations around, they have too many limitations.

Life already gives me a headache. I don’t need any more.