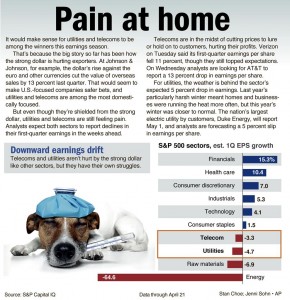 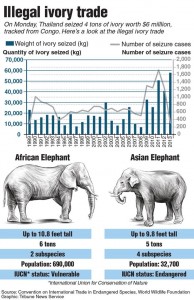 Tepid corporate results and another drop in the price of crude oil pulled stocks mostly lower on Tuesday.

DuPont said the rising dollar weighed on its results in the first quarter as earnings and sales shrunk. The chemical giant also lowered its forecast for full-year profits, and its stock fell $2.15, or 3 percent, to $70.69.

“It seems the market is in a holding pattern as investors are waiting to see just how much the dollar impacts corporate earnings,” said Russell Price, Ameriprise Financial’s senior economist. “So far, things are a bit better than expected, but we’ll see how it plays out.”

A strong dollar reflects the relative strength of the U.S. economy, but for big companies with customers around the world, a rising dollar can mean trouble. It hits Corporate America in two ways, making goods produced in the U.S. more expensive to foreign customers and diminishing the value of sales collected in foreign currencies when U.S. corporations bring the money home.

The rising dollar is a key reason analysts forecast that first-quarter corporate earnings will fall 2.2 percent, according to S&P Capital IQ. They expect sales to sink 1.8 percent. Over the past week, Johnson & Johnson, American Express and General Electric blamed the dollar for hurting their results.

Among a slew of other companies reporting results Tuesday, Harley-Davidson turned in quarterly sales that fell short of analysts’ targets. The maker of motorcycles also cut its full-year forecast for shipments, blaming price cuts by rivals as well as the strong dollar. The company’s stock fell $6.05, or 10 percent, to $55.72.

Teva Pharmaceuticals proposed buying Mylan NV, another maker of generic drugs, for more than $40 billion in cash and stock. The offer depends on Mylan dropping its proposed acquisition of yet another drugmaker, Perrigo. Mylan’s stock jumped $6.02, or 9 percent, to $74.07. Teva’s rose 87 cents, or 1 percent, to $64.16.

Back in the U.S., Kimberly-Clark jumped 5 percent after the maker of Huggies diapers and paper products reported income and revenue that easily beat analysts’ forecasts. Its stock surged $5.79 to $113.15.

Government bond prices fell, pushing the yield on the benchmark 10-year Treasury note up to 1.91 percent.