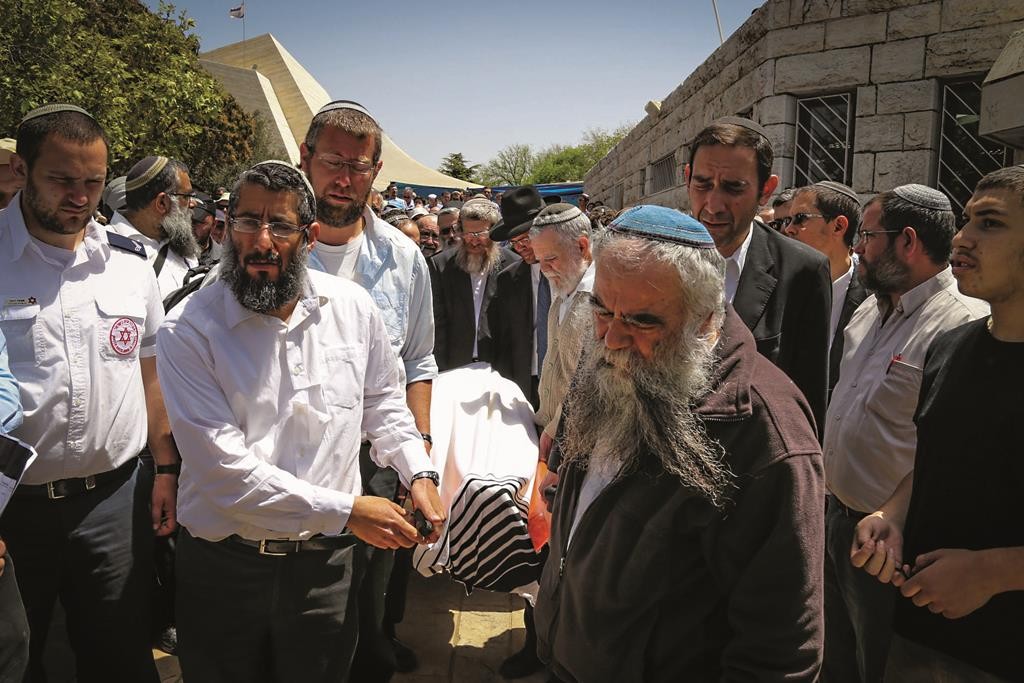 More than 10,000 Jews from all over Israel took part in the levayah on Tuesday of Harav Aharon Lichtenstein, z”l, a senior leader in the religious-Zionist movement renowned for his Torah scholarship and his extraordinary personal influence on people of diverse backgrounds.

The Har Etzion yeshivah, which he headed for over 40 years, was  overflowing with students, family and friends who had come to pay their respects to their revered teacher, who passed away on Monday at the age of 81. Video screens had to be set up to accommodate those who could not get inside for the hespeidim.

Harav Lichtenstein’s son, Rabbi Moshe Lichtenstein, said in his hesped, quoting Tehillim: “Though I walk through the valley of the shadow of death, I shall not fear because You are with me.”

Extolling his father’s spiritual leadership, he said, “You were a soldier of Torah who stood at guard duty. You were a general of Torah.”

Harav Lichtenstein’s influence extended “way beyond” his own yeshivah, said Rabbi Yitzchak Neria, ybl”c, who heads the Torah Be’Tzion yeshivah. “He had some kind of ripple effect which started here in Yeshivat Har Etzion,” he said, noting the mixture of mourners from a variety of religious backgrounds and affiliations.

He was a survivor of the Holocaust. The seven-year-old Aharon Lichtenstein and his family fled Nazi-occupied France for America in 1940.

At a young age, he merited to study under Harav Yitzchak Hutner in Yeshivas Chaim Berlin. Later, he went to Yeshiva University, where he studied under Harav Joseph B. Soloveitchik, from whom he received semichah. He later married Rav Soloveitchik’s daughter Tova.

In 1971, Rabbi Yehuda Amital invited him to join in heading the Har Etzion Yeshiva and he left America for Alon Shvut, where he was to make a lasting mark on the religious world. His shiurim on numerous masechtos in Shas have been collected and published in eight volumes, along with works in Jewish thought. He was also known for his mastery of halachah, and many turned to him for psak in difficult questions.

Harav Lichtenstein was noted for his intellectual achievements in secular studies as well.

His achievements were recognized outside the Torah world as well. Among the many honors he received was the Israel Prize for Torah Literature from the Education Ministry. In the ministry’s official biography, Harav Lichtenstein is lauded for “his broad and multi-faceted originality …and known for his comprehensiveness and profundity.”

But despite his accomplishments, he lived modestly and simply.

Tributes came in from abroad on Monday and Tuesday in response to his passing. “Rabbi Dr. Aharon Lichtenstein was a preeminent Torah scholar and an intellectual giant who had a profound impact on his students, the State of Israel, and the Jewish nation as a whole,” said the Young Israel organization. “Rav Lichtenstein inspired an entire generation through his immeasurable contributions to the religious Zionist movement and the tremendous depth of his rabbinic scholarship, which left an indelible mark on the Jewish world.”

“His passing creates a large void in world Jewry that will not easily be filled. May G-d comfort the Lichtenstein family among the mourners of Tzion and Yerushalayim.”

The OU issued a statement of condolence saying, in part: “Rav Lichtenstein was a prince of Torah and exemplified the highest ideals of Torah U’Maddah, He was a giant in his Talmudic expertise, his broad-ranging wisdom, and his exquisite sensitivity to other human beings.

“His passing leaves a vacuum which will not easily be filled.”

Harav Lichtenstein was laid to rest on Har Hamenuchos in Yerushalayim. He leaves behind his wife Rebbetzin Tova, six children and many grandchildren and great-grandchildren.