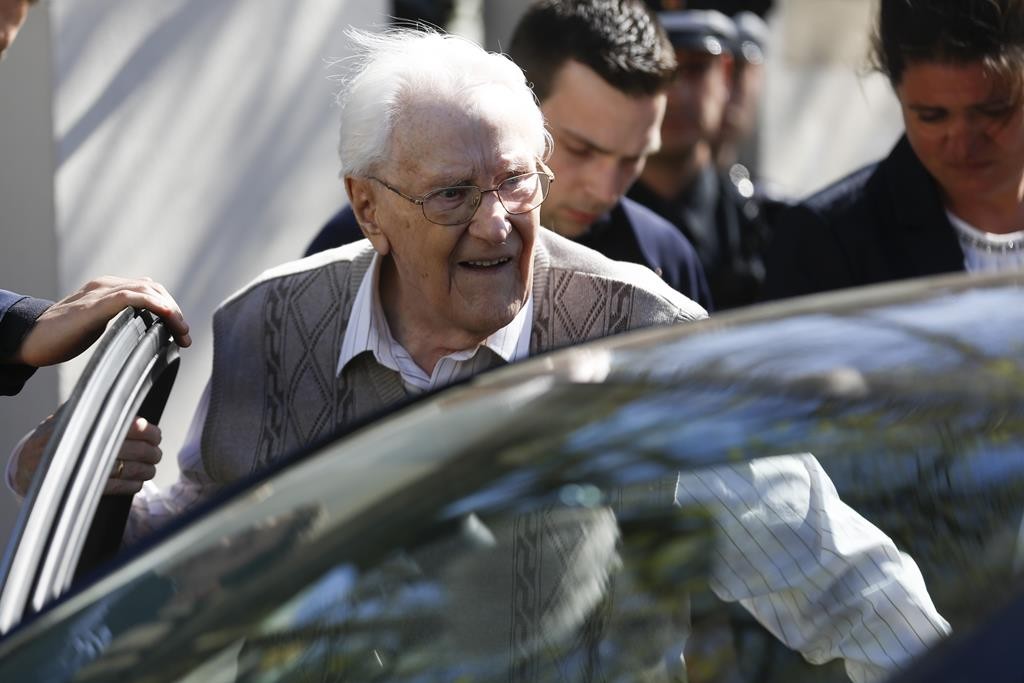 Former SS Sgt. Oskar Groening told a German court Tuesday that he helped keep watch as thousands of Jews were led from cattle cars directly to the gas chambers at the Auschwitz death camp where he served as a guard.

The 93-year-old, charged with 300,000 counts of accessory to murder, said as his trial opened that he had witnessed individual atrocities, but did not acknowledge participating in any crimes.

He recalled how a fellow guard discovered a baby abandoned among luggage and bashed it against a truck to stop its crying. After that, he unsuccessfully requested a transfer and started to drink vodka heavily to cope with working at the camp in Nazi-occupied Poland, he said.

“I share morally in the guilt, but whether I am guilty under criminal law, you will have to decide,” Groening told judges hearing the case at the Lueneburg state court in northern Germany. Under the German legal system, defendants do not enter formal pleas.

Groening testified in a lengthy statement to the court that he volunteered to join the SS in 1940 after working briefly at a bank, and served at Auschwitz from 1942 to 1944.

Aside from helping on the ramp as transports of Jews arrived, Groening said his main task was to help collect and tally money as part of his job dealing with the belongings stolen from people arriving at Auschwitz — a job for which the German press has dubbed him the “Accountant of Auschwitz.”

Groening said the money was regularly sent back to Berlin. Pressed by presiding Judge Franz Kompisch, he said his view was that it belonged to the state.

“They didn’t need it any more,” he said of the Jews from whom the money was taken — drawing gasps from Auschwitz survivors watching.

Among them was Eva Kor, one of some 60 survivors and relatives from the U.S., Canada, Israel and elsewhere who joined the trial as co-plaintiffs as allowed under German law. She is expected to testify as a witness.

Kor, 81, told the Associated Press that she lost her parents and two older sisters in Auschwitz, and that she and her twin sister Miriam were subjected as ten-year-olds to horrific experiments by notorious camp Dr. Josef Mengele.

Kor, who now lives in Indiana, said she will ask Groening about what happened to Mengele’s files in the hope she can learn what she and her sister were subjected to —experiments she said caused her sister to die early, nearly 30 years ago, of kidney failure.

Groening could face a maximum sentence of 15 years in prison if convicted. On his way into court, he told reporters that he expects an acquittal. His attorney, Hans Holtermann, told reporters, “Mr. Groening made a long statement about the things he did in Auschwitz and he confessed that in a moral way he’s guilty … but in the end the decision whether he’s guilty or not needs to be made by the court.”

The trial is the first to test a new line of German legal reasoning that has unleashed an 11th-hour wave of new investigations of Nazi suspects. Prosecutors argue that anyone who was a death camp guard can be charged as an accessory to murders even without evidence of involvement in a specific death.

There are currently 11 open investigations against former Auschwitz guards, and charges have been filed in three of those cases, including Groening’s. Eight former Majdanek guards are also under investigation.

The charges against Groening relate to a period in May and June 1944 when some 425,000 Jews from Hungary were brought to Auschwitz and at least 300,000 were almost immediately gassed to death.

“Through his job, the defendant supported the machinery of death,” prosecutor Jens Lehmann said.

Groening recalled that he and other recruits were told by an SS major before going to Auschwitz that they would “perform a duty that will clearly not be pleasant, but one necessary to achieve final victory.”

Groening testified that he did not know what that duty was until he arrived at Auschwitz but quickly learned that Jews were being selected for work and those who couldn’t work were being killed. In the vocabulary of the camp, he said, “the enemies of Germany were being exterminated.”

Thomas Walther, who represents many of the co-plaintiffs, welcomed Groening’s decision to make a statement and answer questions — almost unheard of in Nazi prosecutions.

“It’s a positive signal for the future course of the trial,” he said.

Kor said she saw Groening as an old man who had had a hard life, “but by his own doing.”

“If you’re guilty,” she asked, “is there such a thing as being morally guilty but not legally guilty?”