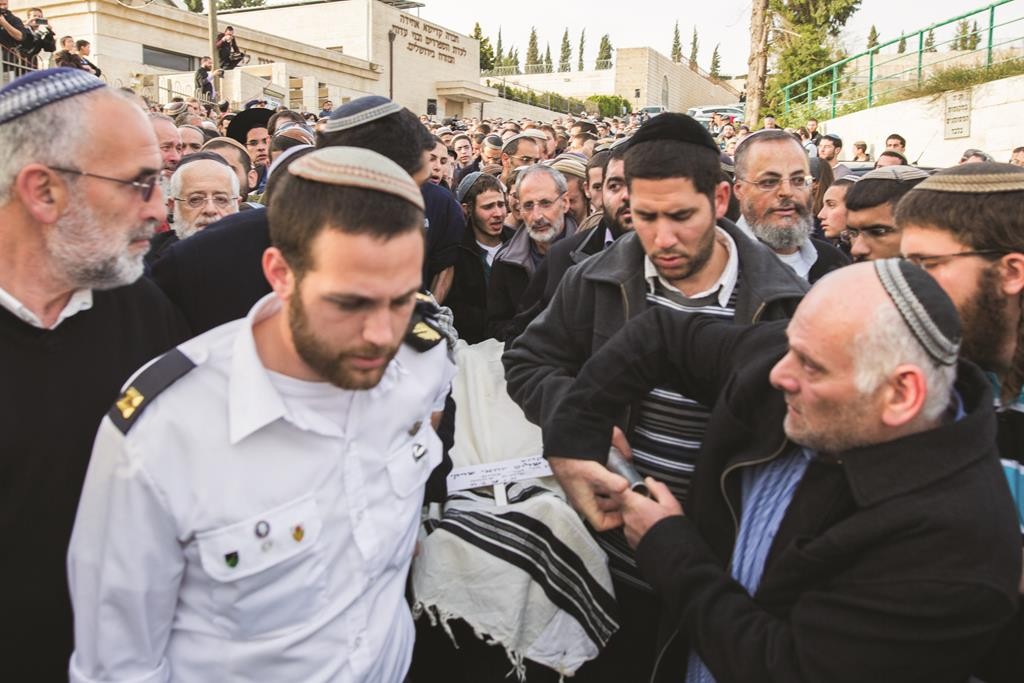 Israeli police were ordered to step up security at vulnerable locations after a Palestinian slammed his car into civilians at a bus stop in Yerushalayim on Wednesday night, killing one and seriously injuring another in what appeared to be a terrorist attack.

Sherki was evacuated to Hadassah University Hospital, Ein Karem, where he died of his injuries on Thursday morning.

“He sat at a bus station and this terrorist killed him … because he’s a Jew,” Ester Sultan, his sister, told Arutz Sheva. “It’s unreal that it happened on Holocaust Remembrance Day, with all the speeches: ‘Never again.’”

“It can’t stay at the level of speeches; if today in Jerusalem a Jew knows that if not at this bus station then at the next one … it can’t be that this situation continues and continues, and Shalom is just another one, on the list of the killed which keeps lengthening from all sorts of terrorists who one moment [decide they] want [to attack],” she said.

“The loss of Shalom is an awful loss, certainly to the family and certainly to all the circles he was connected to. All those he guided,” she said. “Our loss is great.”

Students and faculty at the Bnei Tzvi yeshivah in Bet El in southern Shomron mourned the loss of a beloved friend and teacher on Thursday.

Sherki had studied at Bnei Tzvi, and served there as a youth counselor.

A statement issued by the yeshivah praised him as someone who “guided his boys very successfully,” instilling in them Jewish values such as the importance of giving to others, “a love of G-d and a fear of Heaven — and all with unbounded love and dedication.”

“Shalom was an amazing guy, full of the joys of life, with a huge smile constantly on his face,” the yeshivah related in an official statement.

He was remembered on Thursday for an incident which illustrated his creativity and caring for others.

Amid last year’s snowstorm, when the yeshivah lost electricity and began to run low on food, Shalom organized the students into teams and baked pita bread over gas fires.

“Instead of a depressing Shabbat full of low spirits, thanks to Shalom, we had a happy, uplifting and unforgettable Shabbat. All of us — students, counselors, teachers and every member of staff.

“Shalom was filled with a love for mankind, a giving and happy person [who] always raised the mood around him, sometimes just by his mere presence.”

Shira Klein, tbl”c, who was wounded in the attack, was reported in stable condition. Her mother, Ada, stated that her family shares in the sorrow of the Sherki family over the loss of Shalom, and asks the public to pray for the full recovery of: Shira bat Adel Ada.

The driver, a Palestinian who was lightly injured, has been taken into police custody.

Police chief Insp.-Gen. Yohanan Danino said on Thursday that a preliminary investigation of the incident points not to an accident but to a terrorist attack.

“Our initial suspicion is that this is a terrorist attack, especially given the fact that the incident took place on Holocaust Remembrance Day. In light of recent events, I have instructed the Yerushalayim District to strengthen current security, including stationing permanent security personal at the location where there were a number of terrorist attacks in the past year,” near Hebrew University.

The attack took place directly across an intersection in Eastern Yerushalayim where last year a car slammed into commuters waiting at a train stop, killing three people, including a baby. Its Palestinian driver was shot dead by police.

Along the same main route, a Palestinian motorist rammed his vehicle into a group of people standing near a train stop, injuring at least five. He was shot and wounded by police.