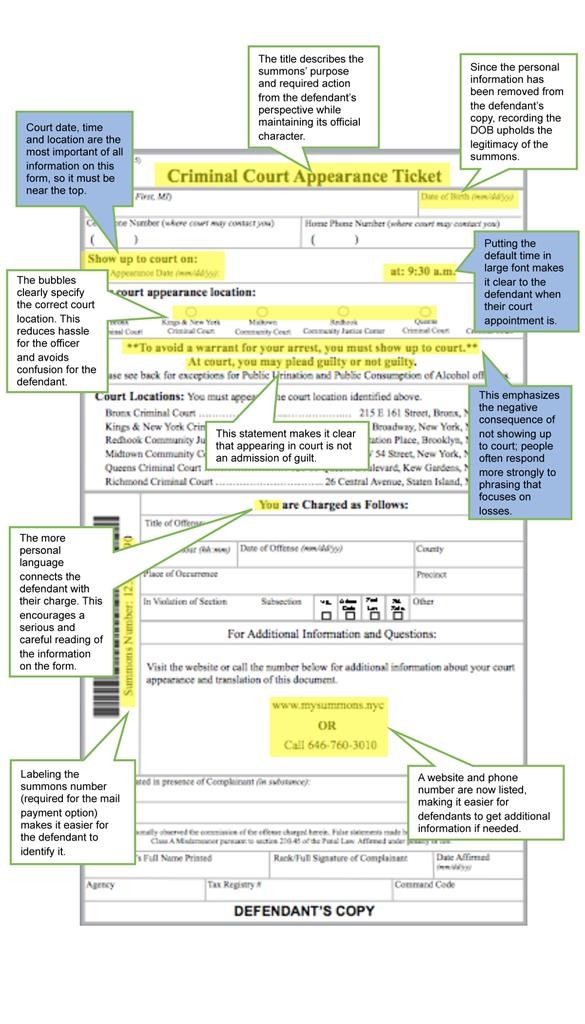 Every year about 40 percent of the hundreds of thousands of New Yorkers slapped with the familiar pink tickets for such low-level offenses as drinking in public, littering and riding a bike on the sidewalk, ignore, forget or otherwise miss their appointed court dates, resulting in arrest warrants and even jail time.

Hoping to reverse an unnecessary burden to an already overloaded justice system, city officials on Tuesday unveiled a series of reforms, starting with the pink summons itself.

Borrowing techniques from the advertising world, city officials consulted with behavioral economists who redesigned the tickets to move the court date from the bottom to the top of the page, added bubbles to highlight the location of the summons court and even changed the form’s language to be more direct.

“To avoid a warrant for your arrest, you must show up to court,” the form now reads in big, bold letters.

A pair of pilot programs to begin next month in upper Manhattan will study how well would-be scofflaws respond to two other innovations: robocall and text-message reminders of court dates, and floating court dates that allow people to show up a week ahead of time and one night per week, whichever is more convenient.

“This is really part of a larger effort to make the system fairer,” said Elizabeth Glazer, the mayor’s criminal justice coordinator. “And there’s never been an effort to look at the summonses themselves.”