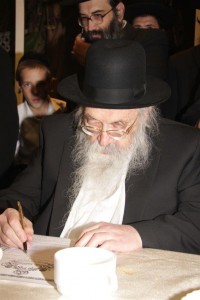 The Torah world was stunned at the news of the petirah of Hagaon Harav Chaim Greineman on Friday, Shevi’i shel Pesach. He was 91.

Thousands attended the levayah in Bnei Brak on Sunday morning, which began at his beis medrash on Chidushei Harim Street and made its way to the Shomrei Shabbos cemetery in the Zichron Meir section of the city. Organizers took extra safety precautions, in light of the tragic deaths of two avreichim who were killed last week at the levayah of Hagaon Harav Shmuel Halevi Wosner, zt”l, due to overcrowded conditions.

Rav Greineman, the nephew and talmid muvhak of the Chazon Ish, zt”l, was known from his youth for his remarkable diligence and sharp mind.

His in-depth writings encompassed all of Shas and he was an authority on medical she’eilos. He was responsible for setting up many educational institutions, especially for Sephardim, and was a founder of the teshuvah movement.

His petirah came as a shock, as during Chol Hamoed he received numerous visitors seeking his brachah and counsel.

In Tammuz 5693, the Chazon Ish moved to Eretz Yisrael and settled in Bnei Brak. Two years later, his sister, husband and their family followed suit. Rav Greineman, then eight years old, learned in Yeshivah Tiferes Zion leTzi’irim in Bnei Brak, which was under the guidance of the Chazon Ish, together with his cousin, ybl”c, Hagaon Harav Chaim Kanievsky.

He went on to learn in the Lomza Yeshivah Gedolah in Petach Tikvah and in Yeshivas Chevron in Yerushalayim.

At a young age, he mastered Shas and at 17 was publishing the first volume of his series Chiddushim uBiurim on Shas.

Rav Greineman would receive visitors every day from Minchah-time until midnight. Anyone who came to him with problems and questions would leave with a sense of clarity.

He continued his full schedule and intense Torah learning until his final days. On Shevi’i shel Pesach, after davening and the Yom Tov meal, he went to lay down and immediately returned his neshamah to its Maker.

A full tribute will appear in the weekly edition.

This article appeared in print on page 1 of the April 13th, 2015 edition of Hamodia.