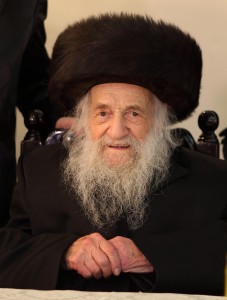 Klal Yisrael was plunged into mourning with the petirah on Leil Pesach, of the Posek Hador, Hagaon Harav Shmuel HaLevi Wosner, zt”l, at the age of 101.

Harav Wosner was hospitalized in the Maya’anei Hayeshuah Hospital on the night after Purim. Across the world, Klal Yisrael davened on behalf of the Gadol, but alas, his exalted Neshamah returned to its Maker shortly after the commencement of Yom Tov in Eretz Yisrael.

As the sad tidings spread across Eretz Yisrael, and after the conclusion of Yom Tov to chutz la’aretz, despite the kedushas hachag, expressions of mourning were heard by his many talmidim as well as the broader Torah community, who saw in Rav Wosner one of the last links to the pre-War Torah greats, of Yeshivas Chachmei Lublin and his Rosh Yeshivah, Harav Meir Shapiro, zt”l, and his being a foremost posek and Torah disseminator for the last seven decades.

Harav Wosner was buried in the Zichron Meir cemetery in Bnei Brak, after a mass levayah, with close to 200,000 participants paying their last respects.

During the levayah, Hatzalah volunteers tended to dozens of participants, injured due to the surging crowds.

An avreich, Reb Mordechai Gerber, z”l, 27, was niftar of his wounds. He was buried on Sunday afternoon in Petach Tivkah’s Segulah cemetery, where both his parents are buried. He is survived by, lhbch”l, his wife and a young boy.

Others are still hospitalized, in various states.

The names of the most serious wounded were released for tefillah. Please daven for: Yitzchak ben Eidel; Yisrael Meir ben Rosa; Tomer Tanchum ben Shoshanah Susan, amongst the sick of Klal Yisrael.