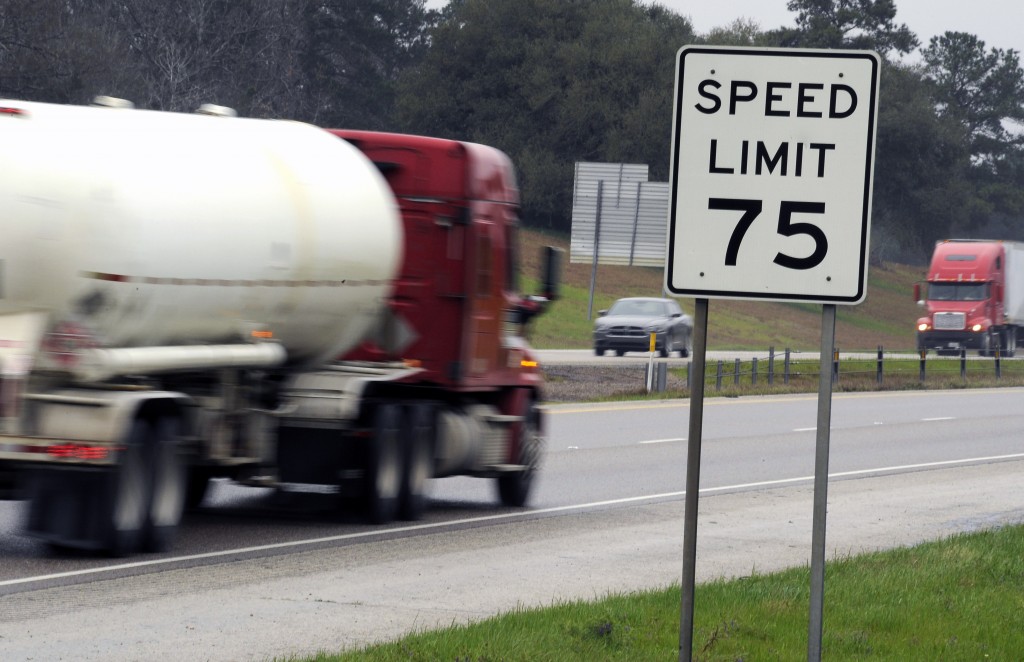 Many tractor-trailers on the nation’s roads are driven faster than the 75 mph their tires are designed to handle, a practice that has been linked to wrecks and blowouts but has largely escaped the attention of highway officials.

Nearly all truck tires have been built for a maximum sustained speed of 75 mph since the middle of last decade, when drivers across the vast majority of the U.S. were allowed to go no faster than 65 or 70 mph.

But 14 states, mainly west of the Mississippi River, now have speed limits of 75, 80, or, in parts of Texas, even 85 mph. Some of those states acted without consulting the tire industry.

“It’s a recipe for disaster,” said James Perham, president of Extreme Transportation Corp., an automobile-hauling company near San Diego that filed a complaint with regulators about Michelin tires after seven blowouts caused an estimated $20,000 to $30,000 in damage to its rigs.

The disconnect between highway speed limits and safety standards was discovered by The Associated Press in a government document that detailed an investigation into truck-tire failures.

Last month, the National Highway Traffic Safety Administration closed the investigation into blowouts involving certain Michelin tires after determining that truck operators, not the tires, were at fault. An investigator wrote that exceeding the 75 mph rating was the most likely cause in all 16 complaints examined. The blowouts resulted in three crashes but no injuries.

State officials and the tire and trucking industries point the finger at each other for causing the problem. Highway officials in three states that allow trucks to go 80 mph or more either disregarded tire-safety ratings, wouldn’t answer questions about them or told the AP they were unaware of them.

Forty people died in truck-tire-related crashes in 2009, and that rose to 52 in 2013, the latest year for which statistics are available.

It’s hard to pinpoint the cause of most blowouts. Road debris can be a factor. Underinflation, heavy loads and high speeds can also damage tires over time.

States set their own speed limits, having been given sole authority to do so by Congress in the mid-1990s, while the federal government, through NHTSA, has authority to raise tire standards.

For now, NHTSA contends the most effective way to attack the problem is a regulation to require devices that would prevent trucks from going over 75 mph. But the proposed measure has been stalled for years in a morass of cost analyses and government reviews.

Another possible solution would be for manufacturers to make tires that can handle higher speeds. Some companies already produce a small number safety-rated at 81 mph that cost about the same as those built for 75 mph.

But manufacturers are hesitant to make more, fearing sales won’t be big enough to justify the cost of redesigning and retooling, said Dan Zielinski, spokesman for the Rubber Manufacturers Association.

He said many trucking companies would not be interested in higher-rated tires because they already equip their 18-wheelers with speed governors that prevent them from going over 75 mph.

Michelin sells more truck tires than any other manufacturer, followed by Bridgestone, Goodyear, Yokohama and Firestone, according to Modern Tire Dealer magazine.

The problem does not extend to ordinary car tires. Ever since Firestone tires started failing on Ford Explorers in the 1990s, the government has required car and light-truck tires to be designed for speeds well above highway speed limits. Even the most basic car tires can safely go up to 112 mph.

The American Trucking Associations, an industry group, says it opposes speed limits over 65 mph, and it has petitioned the government to require speed-limiting devices on trucks.

ATA spokesman Sean McNally provided a 2007 survey done by the group showing that 69 percent of trucking companies already had such devices on at least some of their rigs, with an average limit of 69 mph.

Still, it took federal regulators five years to propose a regulation, and it is still being reviewed by government agencies. It could take months, if not years, to go into effect.

NHTSA began investigating the Michelin tires last October after getting complaints about tire failures, mainly from auto-hauling companies. In one case, a truck going more than the 75 mph speed limit on Interstate 10 in Deming, New Mexico, blew a tire and rolled onto its side.

Of the states that now let trucks travel 75 mph or more, three allow 80 or higher – Texas, Utah and Wyoming. South Dakota is about to raise its truck speed limit to 80, and three more states – Missouri, Nevada and Washington – may go to 75 or higher.

In Utah, the Transportation Department said it didn’t know about the truck-tire speed ratings until told by a reporter. In Texas, a spokeswoman refused to answer repeated questions about whether the state knew about the tire standards before raising speed limits. The sponsor of the law that allowed the Transportation Department to set an 85 mph limit along a new toll road was also unaware of the tire limitations.

“We don’t have any knowledge of this,” said Chris Steinbach, chief of staff for then-Rep. Lois Kolkhorst, now a state senator.

In Wyoming, which raised speeds on some rural highways to 80 mph last July, “it doesn’t look like necessarily there was any consideration of truck-tire speed ratings,” said Bruce Burrows, a spokesman for the state Transportation Department. Wyoming hasn’t seen a spike in tire failures, he said.

Burrows also noted that the speed limit doesn’t require truckers to go 80 mph, and said they should be aware of how fast their equipment can safely travel – a common refrain among state officials.

Tire and trucking industry groups blame the states for allowing unsafe speeds, though they say drivers should be aware of tire limitations.

Along Texas Highway 130, which has an 85 mph speed limit for big rigs, driver David Ortiz said he didn’t know about the 75 mph rating for most truck tires, or how fast his tires were designed to go. He said his company has limited the top speed of his truck to 65 mph, and he normally goes 63.

But Ortiz conceded that a speed limit higher than the tires can handle is a safety problem for truckers who drive faster. “Somebody needs to think about it,” he said.

Although many truck operators maintain their vehicles well, NHTSA found a number with problems.

As part of the Michelin investigation, the agency tested trucks and surveyed over a dozen drivers in Pennsylvania, finding that more than half had overburdened tires because of heavy loads or low air pressure. Sixty percent of drivers didn’t know the proper inflation pressure for the trucks they were driving.

To make sure drivers know their tires’ limits, NHTSA is considering a requirement that maximum speeds be listed on the sidewalls of all truck tires.

Truck tires are generally reliable and are responsible for a relatively low number of accidents, said the rubber association’s Zielinski. But he added: “An 18-wheeler is not a Porsche, and shouldn’t be driven like one.”