Community Who’s to Blame for the Failure of NY’s Tuition Tax Credits?
Community 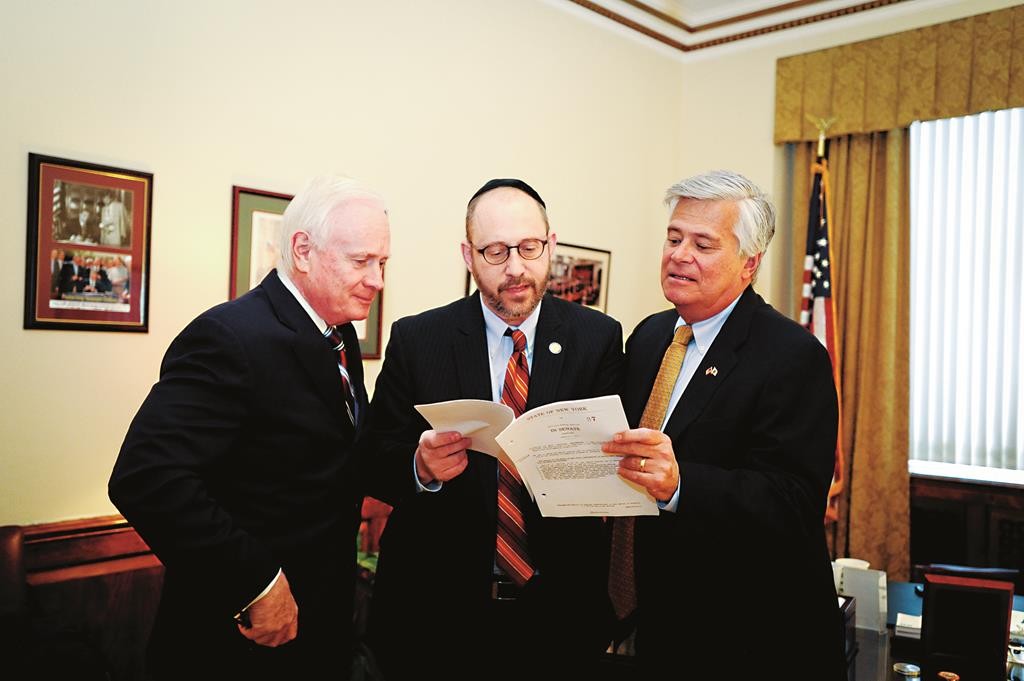 In August of last year, a top lieutenant of Gov. Andrew Cuomo called several activists in the Orthodox community. Let’s sit down for a meeting, he said.

It was several months before the Democratic governor would stand for reelection and, according to information culled from several interviews, he had given up on the Orthodox vote. There was the bill legalizing immoral lifestyles Cuomo pushed through in 2011, and a stronger-than-expected Republican opponent had emerged in the form of Rob Astorino, the Westchester county executive.

But there was still the education tax credit, Cuomo’s team thought, the first proposal made in decades that would significantly aid tuition-paying parents in New York, where the Blaine Amendment — and an Assembly which takes a very broad view of its interpretation — holds a firm grip.

At the meeting, which took place in a private home in Flatbush, the aide offered to have the Education Investment Tax Credit put into the governor’s budget. However, he warned that the teachers’ union was very powerful and would try to block it from passing. Activists pushing Cuomo on the bill would have to double their efforts to include a recalcitrant Assembly as well, he said.

That last item — the fact that the aide had warned in advance that the Assembly was the holdout on the potentially historic bill — is now being pushed by the governor’s team in his defense for the EITC’s failure to pass. Several activists disagree, saying that he managed to push through the Assembly other unpopular items, such as changing the method for how teachers are evaluated.

The budget, finalized on Sunday night and voted on Tuesday, is the second year in a row that basically left out the non-public school sector from the $23.5 billion in education funding — $1.4 billion more than last year.

The year started off looking favorably to its passage, with many of the traditional factors against it seemingly fading away.

In a campaign rally days before his reelection, Cuomo called the bill that could potentially pour $50 million into the private school system a “matter of justice.” The newly installed Assembly Speaker had been a sponsor of the tax credit legislation until he ascended to his post in February. And the Senate, at the urging of Sen. Simcha Felder, actually passed it in their budget proposal.

By the time November rolled around, Cuomo had the Orthodox vote. Williamsburg and Boro Park voted for him by a 60 percent margin — higher than the 53 percent he received in the state overall. The promise for the tax credit, as well as a weak campaign in Orthodox areas by Astorino, convinced many to vote for the Democrat.

So it was a terrible disappointment for activists that their biggest bill in years failed. Just last week, an Agudath Israel of America-led delegation spent a day in Albany pushing friends and moderates to fight for it. Street talk in Orthodox areas iterates a feeling that Cuomo let them down.

“He took our votes and then forgot us,” one man bitterly told this writer. “Cuomo deceived us,” another said. Both refused to be named.

The anti-Cuomo sentiment comes from the fact that he said that the EITC should be linked to the Dream Act, which would give free college to illegal immigrants. There was no way the Senate’s Republican majority would vote for that bill, which they campaigned against in last year’s election.

But sources in the governor’s office, the Senate and activists in the Orthodox community say that it is far from simple to blame Cuomo. What is certain, they say, is that the Assembly refused to have it in the bill.

“If the governor would have the bill and would veto it, then you can blame him,” one source said. “The fact is, the Assembly did not put it in the budget.”

The governor also says that he linked it in order to give the EITC a chance to pass the Assembly, which was a strong advocate for the Dream Act.

Rabbi Shmuel Lefkowitz, the Agudah’s vice president for community affairs, told Hamodia that he was inclined to mainly blame the teachers’ union for the bill’s failure.

“Despite the strong support of the lawmakers who represent us, the opposition was stronger and the votes were not there,” he said. “It is basically the unions that won.”

However, he added, “It seems that the governor got everything he wanted except for the EITC. It’s disturbing. It’s very disturbing.”

Assemblyman Dov Hikind, who said he would vote against the entire budget “as a matter of principle,” also blamed both Cuomo and the union.

“The problem is twofold,” he said in a statement issued Monday. “While Education Investment Tax Credits benefit public school children as well as children in private and parochial schools, the teachers’ unions stood against EITC. When they preach dedication to education for all children, they don’t mean our children. … In addition, EITC was not included in the budget because Governor Cuomo refused to lead on this issue.”

Three Democratic Assembly members, including one with a significant Orthodox constituency, were singled out by activists for their aggressive lobbying against the EITC: Richard Gottfried of Midtown Manhattan, Deborah Glick of Lower Manhattan and Ellen Jaffe of Rockland County.

“There are some Assembly members who are strongly opposed to the [tax credit] but have a significant Orthodox constituency,” Rabbi Lefkowitz said. “We have to take a very hard look at those districts.”

The governor has also said that the fact that it did not make it into the budget does not mean the tax credit bill is dead.

“Just because you don’t authorize a rebate now or a tax credit now, for example like in the EITC — it doesn’t mean the money goes away,” Cuomo said on Saturday. “You still have the money in the budget. If you pass the tax credit bill in June, you have the money.”

Felder, who was a prime sponsor of the bill, went even further.

Felder and others said last week that since the tax credit costs money, there was no way it could pass after the budget is completed. But he said on Tuesday that he had made a mistake. Since the EITC would only begin next year, it would come off that year’s budget, not this year’s.

“I thought about it afterwards,” he said. “It wouldn’t come out of this fiscal budget. It would be in January 2016 when it would come off the taxes.”

Felder said he discussed it with his legal counsel, who agreed with him.

“Both the Assembly and Cuomo are responsible for not getting this bill done,” Felder says.

So what’s next for the bill?

The thinking in Albany, both in the governor’s office and in the Senate leadership, is that the current session which ends in June offers a unique opportunity for the tax credit. Mayor Bill de Blasio is pushing hard for a renewal of mayoral control over the New York City school system, and longtime rent stabilization laws for the city are up for renewal. De Blasio also wants an increase in the city’s minimum wage.

All three are top priorities for the progressive caucus, of which the teachers’ union is a prominent player. They can perhaps be convinced to drop their opposition to the EITC in exchange for that.

As opposed to the Dream Act, mayoral control is considered unthinkable for the Assembly to allow to wither.