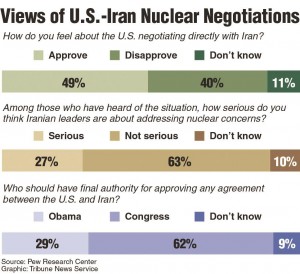 Nuclear talks between Iran and six world powers was slated to pass the negotiators’ self-imposed Tuesday night deadline and will be extended by at least a day, the United States said.

State Department spokeswoman Marie Harf said enough progress had been made to warrant an extension, although there still were “several difficult issues” to bridge. Secretary of State John Kerry, who had planned to leave the talks on Tuesday, will remain until Wednesday, she said.

Diplomats said China’s foreign minister had left the talks to return to Beijing and would be represented by his deputy. U.S. officials said they were prepared to continue to negotiate into Wednesday if it could lead to a framework accord.

An Iranian negotiator, meanwhile, said his team could stay “as long as necessary” to clear the remaining hurdles.

In Washington, White House press secretary Josh Earnest suggested that talks meant to produce an outline that would allow the sides to continue negotiations until the June 30 final deadline had not bridged all gaps. But he said that the sides were working to produce a text with few specifics, accompanied by documents outlining areas where further talks were needed.

If the parties end up agreeing only to a broad framework that leaves key details unresolved, Obama can expect stiff opposition from members of Congress who want to move forward with new Iran sanctions legislation. Lawmakers had agreed to hold off on such a measure through March while the parties negotiated.

The real deadline in the talks, Western and Iranian officials said, was not Tuesday but June 30.

They said the main sticking points were the removal of U.N. sanctions and Iranian demands for the right to unfettered research and development into advanced nuclear centrifuges after the first 10 years of the agreement expires.

“There will be no agreement if the sanctions issue cannot be resolved,” Majid Takhteravanchi, an Iranian negotiator, told Iran’s Fars news agency. “This issue is very important for us.”

The six powers want more than a 10-year suspension of Iran’s most sensitive nuclear work.

Russian Foreign Minister Sergei Lavrov said that he believed there was a good chance of success.

“The odds are quite ‘doable’ if none of the parties raise the stakes at the last minute,” he told reporters in Moscow before returning to Lausanne.

Both Iran and the six have floated compromise proposals, but Western officials said Tehran has recently backed away from proposals it previously indicated it could accept, such as on shipping enriched uranium stocks to Russia.

Officials said dilution of the stockpiled uranium was an option, saying that the stockpiles issue was not a deal breaker.

Iran and the six powers have twice extended their deadline for a long-term agreement, after reaching an interim accord in Geneva in November 2013.

The U.S. Congress has warned it will consider imposing new U.S. sanctions on Iran if there is no agreement this week, giving a sense of urgency to the talks.

“With Congress, the Iranian hawks and a Middle East situation where nobody’s exactly getting on, I’m not convinced we’ll get a second chance if this fails,” a senior Western diplomat said.

President Obama has threatened to veto any sanctions moves by the Republican-dominated Congress.

Meanwhile, in Yerushalayim, Prime Minister Benjamin Netanyahu reiterated Israel’s concern that an agreement would fall short of guaranteeing its safety.

The framework agreement would leave Iran with the capability to develop a nuclear weapon in under a year, said Netanyahu.

This article appeared in print on page 1 of the April 1st, 2015 edition of Hamodia.