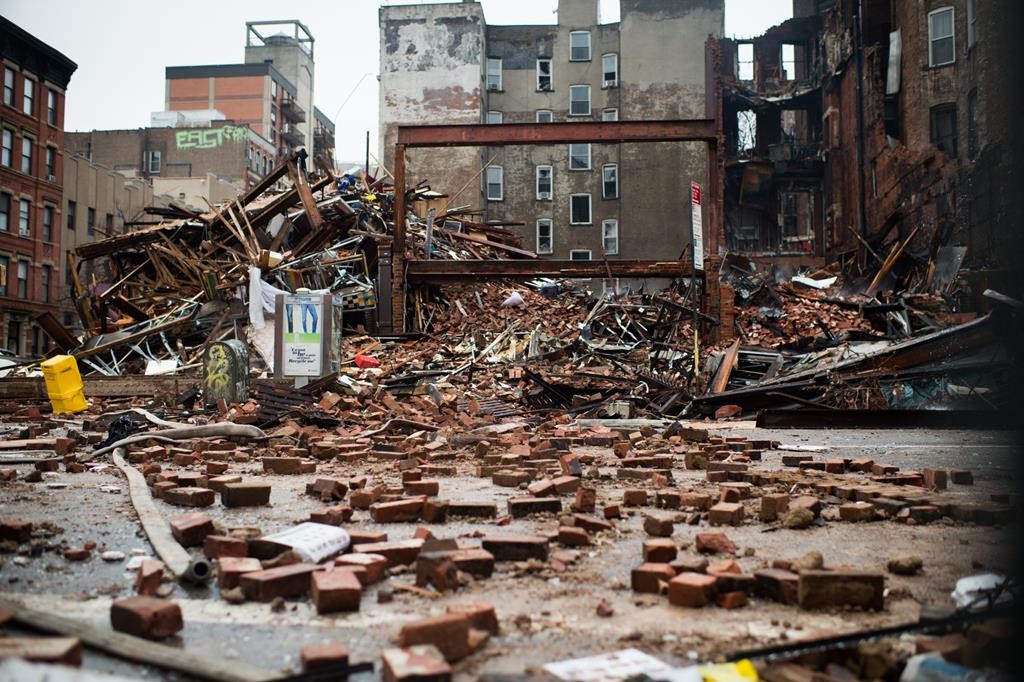 No identification was immediately released, but authorities had been looking for signs of two missing men, both believed to have been inside a ground floor sushi restaurant at the time of the explosion: 26-year-old Moises Lucon, who worked at the restaurant, and 23-year-old Nicholas Figueroa, a bowling alley worker who had been dining there.

The search of the rubble continued after Sunday’s discovery: Workers raked through piles of loose brick and wood; rescue workers sent search dogs over debris where three apartment buildings once stood.

Figueroa’s brother, Neal, leaned over barricades and shouted pleas to emergency workers: “He’s a strong man, I know he’s in there! Don’t give up, please find my brother.”

Authorities, however, acknowledged the chances of finding anyone alive were slim.

Rubble removed from the scene would be taken to a secure location and screened again for human remains. Workers have already reached the basement level at the blast site. They will stop digging when they get close to the front wall of the restaurant because that section of the building must be examined as possible evidence of what caused the explosion.

Mayor Bill de Blasio said someone may have improperly tapped a gas line before the explosion that injured 22 people, four of them critically.

Con Ed said utility workers had discovered in August that the gas line to the restaurant had been illegally tapped. The discovery led Con Edison to shut down gas service to the building for about 10 days while the building owner made repairs. Gas service was restored after they deemed it safe.

Inspectors from Con Ed had visited that building about an hour before Thursday’s explosion and determined work to upgrade gas service didn’t pass inspection, locking the line to ensure it wouldn’t be used and then leaving. The work underway was to put in a bigger line to serve the entire building, Con Ed President Craig Ivey said.

Fifteen minutes later, the sushi restaurant’s owner smelled gas and called the landlord, who called the general contractor. Nobody called 911 or Con Ed.

The contractor, Dilber Kukic, and the owner’s son went into the basement and opened a door, and then the explosion happened, burning their faces, NYPD Chief of Detectives Robert Boyce said.