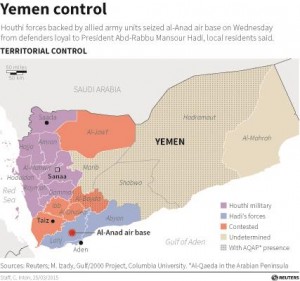 Houthi militia forces and allied army units seized Aden airport and a nearby air base on Wednesday, tightening their grip on the outskirts of the southern Yemeni city after President Abd-Rabbu Mansour Hadi fled his residence for a safer location.

The United States said Hadi, holed up in Aden since fleeing the Houthi-controlled capital Sanaa last month, was no longer at the compound he has been using as a base. It offered no other details on his movements.

Residents later said looters had entered the residence hours after Hadi vacated it in mid-afternoon for an unknown location. Foreign Minister Riyadh Yaseen and Hadi’s aides said Hadi remained in Aden, in a safe place, without elaborating.

Local officials said troops loyal to Yemen’s ex-president Ali Abdullah Saleh, a powerful ally of the Houthis, had captured Aden airport in late afternoon but that clashes with Hadi supporters were continuing in the vicinity. The airport was closed and all flights were canceled.

Yemen’s slide toward civil war has made the country a crucial front in mostly Sunni Saudi Arabia’s rivalry with Shiite Iran, which Riyadh accuses of stirring up sectarian strife through its support for the Houthis.

Sunni Arab monarchies around the region have condemned the Shiite Houthi takeover as a coup and have mooted a military intervention in favor of Hadi in recent days.

U.S. officials say Saudi Arabia is moving heavy military equipment including artillery to areas near its border with Yemen, raising the risk that the Middle East’s top oil power will be drawn into the worsening conflict.

While the battle for Aden is publicly being waged by the Houthi movement, many there believe that the real instigator of the campaign is former president Saleh, a fierce critic of Hadi.

Saleh was the force behind Aden’s previous humiliation in 1994, when as president he crushed a southern secessionist uprising in a short war.

Unlike other regional leaders deposed in the Arab Spring, Saleh was allowed to remain in the country.

Army loyalists close to Saleh on Wednesday warned against foreign interference, saying on his party website that Yemen would confront such a move “with all its strength”.

Diplomats say they suspect the Houthis want to take Aden before an Arab summit this weekend, to preempt an expected attempt by Hadi ally Saudi Arabia to rally Arab support at the gathering for military intervention in Yemen.

On Thursday, the Arab League will discuss a proposal by Yemen’s foreign minister, who called on Arab states to intervene militarily to halt the Houthi advance, the regional body’s deputy secretary general said.

This article appeared in print on page 1 of the March 26th, 2015 edition of Hamodia.