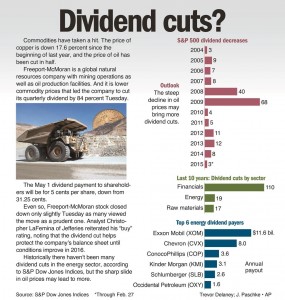 Signs that the dollar could resume its recent surge also made investors nervous.

Homebuilders bucked the trend, gaining after sales of new U.S. homes in February climbed to their fastest pace in seven years.

The stock market has drifted lower for two straight days. The declines follow a rally in the market last week when Federal Reserve policy makers surprised investors by suggesting they were in no hurry to raise interest rates. Those low rates have helped power a six-year bull run for stocks.

“We’re in something of a holding pattern as markets continue to digest all that’s going on,” said Kristina Hooper, U.S. investment strategist at Allianz Global Investors.

Stocks were little changed throughout the morning before drifting lower in the afternoon.

The slump in stocks coincided with a rally in the dollar. The U.S. currency had started the day lower against the euro before erasing those losses.

The dollar index, which measures the strength of the U.S. currency against a basket of others such as the euro and Japanese yen, has climbed 15 percent in the last six months.

That rise has already weighed on the earnings of companies such as Coca-Cola and Caterpillar that rely on overseas sales for a large portion of their earnings. S&P 500 companies start reporting results for the first quarter next month.

In other economic news, a modest rebound in gas costs and broad gains in other categories lifted consumer prices for the first time in four months. The consumer price index rose 0.2 percent in February, the Labor Department said Tuesday, after dropping 0.7 percent the previous month.

Utilities declined the most of the 10 industry sectors in the S&P 500. They are the worst performing group in the index this year, falling 5.8 percent.

These stocks typically pay dividends that are high relative to their companies’ share prices. They were in demand last year, when government bond yields fell, and investors wanted them for the level of income they were no longer able to get from bonds.

Now, they are less popular because many investors think that the Fed will raise interest rates later this year. That means that the yield on safer bonds should eventually rise, making utilities less attractive by comparison.

“Your real vulnerability is on the stock side,” said Jeff Lancaster, a principal of San Francisco-based Bingham, Osborn & Scarborough. “You can lose more money in a day in stocks than you can in a bad year on bonds.”

Among individual stocks, mining company Freeport-McMoRan Inc. fell after it said it would slash its quarterly dividend by 84 percent due to falling commodity prices The company’s stock fell 15 cents, or 0.8 percent, to $19.18.

Home builders were among the gainers on Tuesday, after the Commerce Department said that new-home sales shot up 7.8 percent last month to a seasonally adjusted annual rate of 539,000, the strongest performance since February 2008.

In energy trading, the price of U.S. crude rose slightly as traders anticipated the release of weekly supply information. Benchmark U.S. crude rose 6 cents to close at $47.51 a barrel in New York.

Brent crude, a benchmark for international oils used by many U.S. refineries, fell 81 cents to close at $55.11 in London. The price slipped on weak Chinese manufacturing data that suggested lower global demand.

Prices rose in government bond trading, pushing down the yield on the 10-year Treasury note to 1.87 percent from 1.91 percent late Monday.