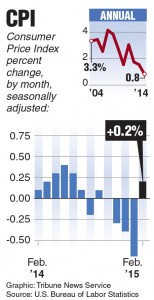 Consumer prices rose in February for the first time in four months, as gasoline prices rebounded from a steep fall that had helped to drive down inflation since the middle of last year.

The consumer price index increased 0.2 percent, after a 0.7 percent drop in January that was the largest decline in more than six years, the Labor Department said Tuesday.

Gasoline prices rose 2.4 percent in February after falling 18.7 percent the previous month. The increase in prices at the pump was the first since June.

More broadly, energy prices were up 1 percent in February following a 9.7 percent decline the previous month.

Food prices also were up, rising 0.2 percent after being flat in January.

So-called core inflation, which excludes volatile food and energy prices, increased 0.2 percent in February, the same as in the previous month.

But the long, steep slide in oil prices continued to have an effect on annual inflation. Prices did not rise at all for the year ended Feb. 28.

Gasoline prices were down 32.8 percent during that time, while overall energy prices fell 18.8 percent.

“Inflation is likely to slow in March as energy prices have fallen this month, but they do appear to be near a bottom,” said Gus Faucher, senior economist at PNC Financial Services Group.

But she and other central-bank policymakers want to see inflation moving up toward the Fed’s 2 percent annual target before enacting the first interest-rate hike since before the Great Recession.

This article appeared in print in the March 25th, 2015 edition of Hamodia.