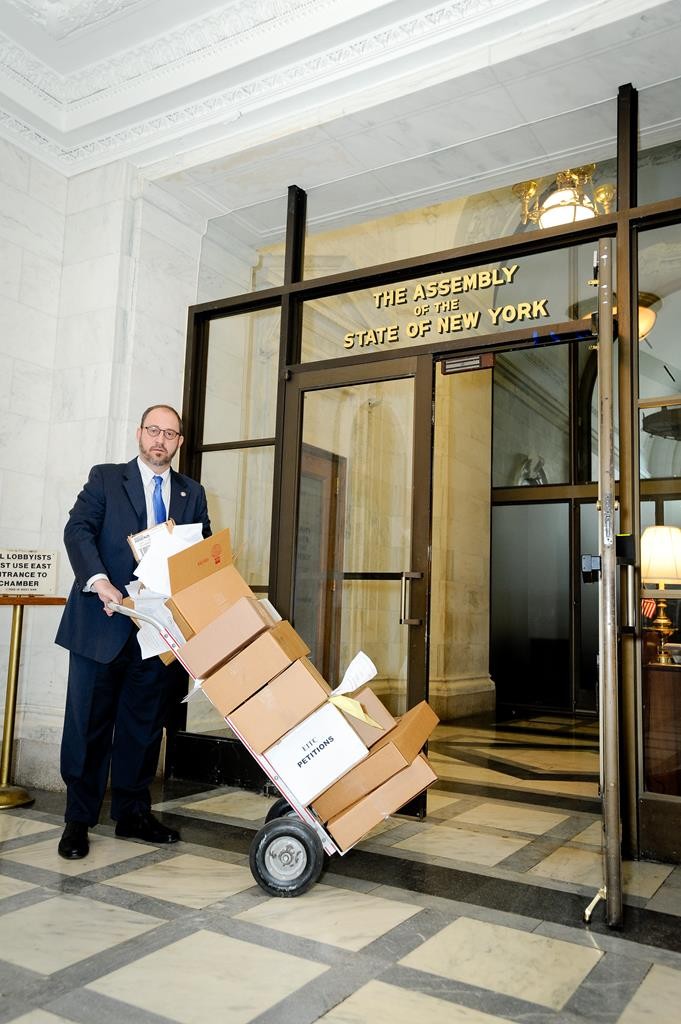 Lawmakers and activists incensed that a potentially historic education tax credit was pulled from the budget by Gov. Andrew Cuomo and the Assembly are saying they will not go down silently.

State Sen. Simcha Felder on Tuesday issued a sharply worded statement that “this Purim spiel is over.” Assemblyman Dov Hikind is vowing to vote against the entire $142 billion state budget. And a community activist and Cuomo supporter is taking out full-page ads telling the governor that “justice delayed [is] justice denied.”

Hikind told Hamodia on Tuesday, a day after Assembly Speaker Carl Heastie withdrew the EITC from budget talks and Cuomo followed up by stating that it was not on his list of priorities, that he would vote down the budget if the $100 million Education Investment Tax Credit is not in it.

“I will vote against the entire budget if the tax credit is not in the budget, and I’ve never done that in my 32 years in the Assembly,” Hikind said. The budget, which is not final, gives $3.5 billion to the public school system, atop their $21.5 billion budget.

Hikind said that he was in talks with other lawmakers, including 11 others with significant Orthodox and Catholic constituencies who signed a letter last week calling for EITC to be enacted, to also vote against the budget. So far, Assemblymen Michael Simanowitz and Philip Goldfeder, both Democrats from Queens, have joined the list.

“We are trying to get as many people as possible to vote against the entire budget. That’s the only way we could do it,” Hikind said. “If education for our kids is not as important for some people, I don’t have to vote for any budget.”

Felder, a Brooklyn Democrat who caucuses with the Republican majority, released a sharp response to the Assembly and the governor’s announcement. He reminded Cuomo of his pledge made during a rare visit to Boro Park days before his reelection last year that the tax credit must pass since it was “a matter of justice.”

“Now, both the Assembly and the governor have embarked upon a campaign of misinformation and more empty promises,” said Felder, who earlier this year embarked on a “parent petition” to urge passage of the bill.

“Year after year, the Assembly and governor promise to pass the EITC, and year after year, they break that promise. What they are really telling us — yeshivah parents — is that we are not a priority at all,” Felder said.

Campaigning in Boro Park in October, Cuomo left little doubt among participants that he was committed to helping parents with the EITC.

“It’s not charity, it’s not a favor. It’s justice,” Cuomo said. “TAP, public transportation and the school buses — that was justice. Education tax credit — this is a matter of justice.”

It was less than a week before election day — which he would go on to win with 60 percent of the vote in Boro Park, more than the 53 percent he received statewide. But Cuomo framed his visit as part of a “35-year relationship” with the Jewish community, “a special relationship” that “I will do anything in my power to build and to grow.”

Leon Goldenberg, a close Cuomo ally and a longtime activist, signed an open letter to the governor on Tuesday calling him out for his statement.

“When you campaigned in our community last year, you described the education investment tax credit as a matter of ‘justice,’” Goldenberg wrote. “And you pledged to do all in your power to make it happen. … Now, though … you have sent a message that the EITC is not so important to you after all. … This is a classic case of ‘justice delayed, justice denied.’ Indeed, it’s now or never.”

On Monday, Heastie said that both the Dream Act, which gives free college to illegal immigrants and is a Democratic priority, and the EITC were pulled from budget talks and would be revisited afterward.

A Cuomo spokeswoman issued a statement shortly after that both bills were not his priority and should not hold up lawmakers’ work for an on-time budget. The governor’s two priorities, according to his spokeswoman, were ethics reform and a change to the way teachers are evaluated.

“The Dream Act is supported by the Assembly and the Education Tax Credit is supported by the Senate. Last year, neither initiative was passed,” spokeswoman Melissa DeRosa said. “The governor believes at this point, that either both will pass or neither. The governor supports passage of both and included them in his budget. If they don’t pass in the budget, they could still pass in regular session.”

The statement came as a shock to supporters of the education tax credit bill, which failed last year despite promises of support by the governor.

Felder questioned how lawmakers could pass bills but not include them in the budget.

“If they are not in the budget,” Felder said, “it doesn’t get done since they both cost money.”

The tax credit is designed to help both public and private school parents. Its cost — between $100 million to $150 million, depending on Cuomo’s or the Senate’s version — is equally divided between public school enrichment and tutoring services and tuition credits. It allows between 75 to 90 percent of donations to a scholarship fund to be taken off the state tax bill.

On Tuesday, Felder crossed over to the other side of the Capitol building in Albany to deliver to the Speaker’s office boxes filled with “tens of thousands” of petitions, according to someone who counted them. Felder urged people to continue to voice their support for the EITC by sending an email with their name and address to TuitionCreditNow@gmail.com or by calling his office at 718-253-2015.

Hikind, meanwhile, said that there are a sufficient number of assemblymen who will vote for the tax credit if it is brought to a vote.

“In the Assembly, we have close to 80 sponsors,” said Hikind. “I’ve been making the rounds and I have heard many more colleagues say they will support the bill if it’s brought to a vote. So I am asking the Assembly’s Speaker to allow this process to move forward.”

An Agudath Israel of America delegation on Wednesday will meet with elected officials in Albany regarding the tax credits. Negotiations must be completed three days before the March 31 deadline.

“The governor must keep his word — now,” Hikind said. “Now is the time to keep his word, not later. It’s about leadership.”