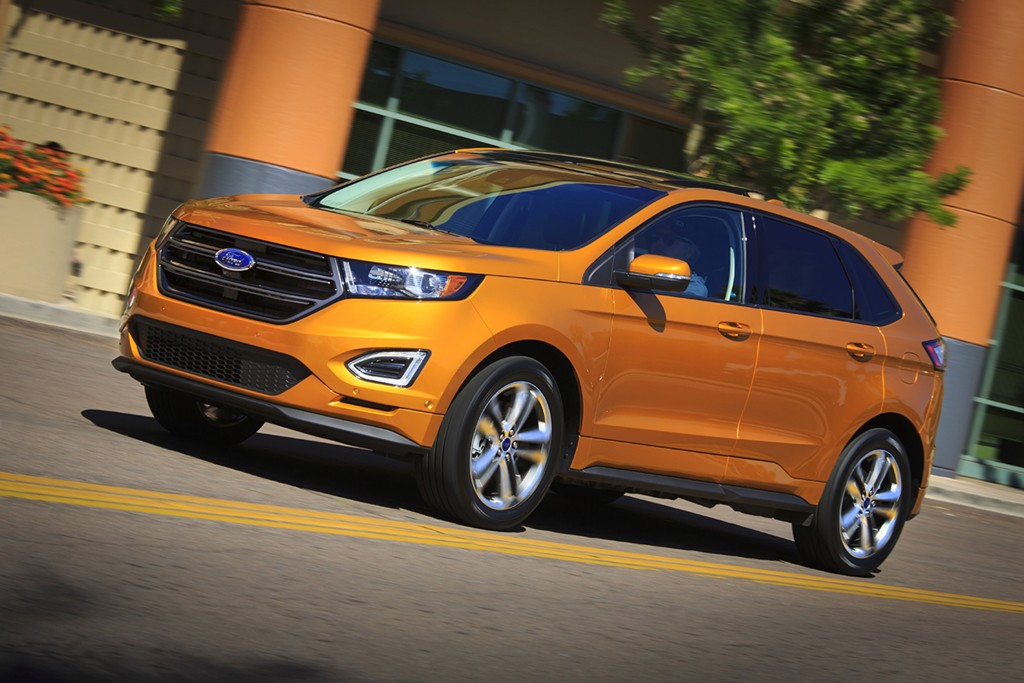 The 2015 Ford Edge midsize crossover is a tweener with a short model year and nestled between the popular Escape and Explorer utility vehicles.

For every Edge Ford sells, it sells two of the larger Explorer and three of the smaller Escape crossovers.

The Edge is a bit of a curious beast: a near-premium two-row crossover that is almost the size of many three-row utility vehicles. Ford feels it has no direct competitors from General Motors or Fiat Chrysler Automobiles. Japanese competitor Toyota Venza is being discontinued, and the Honda Crosstour could follow suit. That leaves the Hyundai Santa Fe Sport, Kia Sorento and Nissan Murano as the only competition in Ford’s eyes.

More important to Ford is keeping a loyal Edge customer base. Internal surveys show styling is a top purchase consideration for Edge buyers — more important even than fuel economy, said Cristina Aquino, Edge brand manager. The 2015 Edge adds more capability but does not improve its fuel economy over the outgoing model.

Because styling is a selling point, exterior designer Kevin George and interior designer Hak Soo Ha deliberately kept signature design cues from the outgoing Edge and created a modern interpretation that is more sleek with greater use of upscale materials.

“We don’t want to chase other brands,” George said. “We just wanted to update the Edge’s look. We worked a lot with marketing as we designed it to meet customers’ expectations. Instead of just being loud to capture peoples’ attention, we went for a premium look and feel.”

There is also a host of additional features and technologies, from park assist and cameras to heated seats and steering wheels and a liftgate that opens with the swish of a leg.

There was internal debate over which model year this next-generation Edge should be, said engineer J.D. Shanahan. He does not know all the factors behind the decision, but among them were the logistics of the introduction of the new Sync 3 infotainment system, which Ford is introducing later this year on 2016-model vehicles. Edges going to market now still have the Microsoft-based MyFord Touch system. Shanahan said it would have been confusing in the showroom to have some 2016 Edges with Sync 3 and some without.

Other executives said the vehicle needed a 2015 model year, albeit short. And there are financial and residual value factors that are always weighed when automakers decide a vehicle’s model-year designation.

Model year aside, the 2015 Edge represents a giant leap forward in terms of its ride and handling, materials, styling and features.

The Edge was introduced in 2006, when the only real competition was the Murano. It received a refresh in 2011, but continued to be built on the same underpinnings nine years later.

This second generation migrates to a new and much more capable platform — the same one that is used for the Ford Fusion/Mondeo and the Ford Galaxy and S-Max in Europe. It is the last Ford vehicle from a vehicle program that was developed years ago with Mazda, and will now go away.

In fact, the 2015 Edge will be sold in Europe for the first time later this year. Built in Oakville, Ontario, the Edge will now be exported to 100 markets. And a three-row version will be built in China for that domestic market. Plant and production details will be made public next month at the Shanghai auto show.

During test drives in Phoenix, the Edge showed off improved electric power-assist steering that adjusts the amount of input needed to the speed being traveled, and the vehicle had a more responsive feel overall with its new, more-premium multi-link rear suspension.

The need to impress pickier customers in Europe and Asia is evident in softer and more stylized materials used in the interiors.

In the U.S., 35 percent of sales are Limited and Sport, which are the high-end models, said Craig Patterson, Ford’s utility marketing manager. The figures should be similar with the addition of Titanium as the new top level. Limited level goes away.

— Base engine is now an improved twin-scroll turbocharged 2-liter four-cylinder engine that generates 245 horsepower and 275 pound-feet of torque and makes it possible to add all-wheel drive and tow with this small engine. Twin-scroll refers to having two exhaust tubes feeding the single turbocharger for greater efficiency.

— Features include active park assist for hands-free parallel and perpendicular parking, help getting out of a tight spot and cameras to detect obstacles.

— Hands-free liftgate, which was first introduced in the Escape and C-Max.