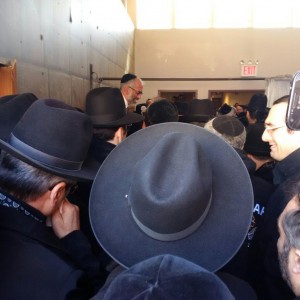 Tears and a speechless feeling of communal loss defined the massive levayah of the seven members of the Sasson family, z”l, who perished in a tragic fire over Shabbos.

“It’s an unbelievable tragedy. When our Rabbi spoke about it he said it is like a nuclear bomb to wake us all up,” said Ezra Netanelli.

Like Mr. Netanelli, many people inside Shomrei Hadas Chapel did not personally know the family, but came as members of the famously close-knit Syrian community of Flatbush.

“Such a terrible thing shakes well beyond our community, something like this shakes up all of Klal Yisrael,” said Victor Allyn.

Even before hespeidim began, sobs could be heard from all sides of the room, as family, friends and a community struggled to deal with the unfathomable pain of the event.

“It’s a very tragic story,” said Yeshuah David. “I was in shul on Shabbat morning when someone came to tell one of the family’s uncles what had happened. He broke down completely, crying uncontrollably. People say ‘Oh, if it wouldn’t be for this or that, such a thing would not have happened,’ but we really can’t know. It’s just a tragedy.”

As the caskets of the seven Sasson children were carried into the chapel, the somber crowd broke out into cries, shrieks, and hysterical wails of grief and anguish. The chapter of Tehillim, V’yehi noam, was recited followed by several other chapters. The assembled seemed to pause and give extra attention to the closing words of Mizmor Shir L’Yom HaShabbos; “Hashem is just, my Rock in Whom there is no wrong,” as if struggling to accept the challenging situation.

“On Rosh Chodesh we bring a korban olah, a burnt offering, seven pure sheep, my seven pure children,” said the father, Rabbi Gaby Sassoon. As he enumerated the names and qualities of his perished children, the crowd broke out in uncontrollable tears.

“There is nothing to say, only that we must surrender to the will of Hashem,” he said. “My children were kedoshim. My wife raised them with great mesirus nefesh to keep them pure.”

“I want to ask my children forgiveness. I did my best and my wife did her best. Please, everybody, love your child, love your children, love others’ children… understand them, don’t negate them,” he said.

Rabbi David Ozeri of the Yad Yosef Torah Center and a rebbi of one of the Sassoon children at Yeshivah Ateret Torah expressed the brokenness of his community and the mosad.

“Seven neshamot have returned as tahorim [pure ones],” he said. “In school there will be seven empty desks that were occupied by these children. They each contributed so much to their classes. They came from Eretz Yisrael from a different chinuch. A chinuch that is totally pure. One day their classmates will say, ‘I had a Sassoon in my class.’”

Rabbi Ozeri, as did each maspid, entreated those listening to daven for the recovery of the children’s mother and surviving child.

“The whole Jewish world is crying with you,” he said. “To the grandparents and to the extended family we are here to say, ‘We are here for you, you are not alone.’”

Chacham Yosef Harari-Raful, Rosh Yeshivah of Ateret Torah, evoked the example of Aharon Hakohen, whose sons, Nadav and Avihu, were also taken from this world by a fire on Rosh Chodesh Nisan, the day of the inauguration of the Mishkan.

“There is no way to express our feelings about such a thing. The only way to express it is ‘vayidom Aharon, and Aharon was silent,’” he said. “We will not ask questions of Hashem. All we will ask is for Hashem to help us react the way that we are supposed to and to open our eyes that we should think properly about this tragedy.”

The Rosh Yeshivah expressively prayed that Hashem should give the community the wisdom and understanding to help their children and themselves come to terms with the heartbreaking loss.

A representative of the family thanked agencies of the city and organizations of the Jewish community which have helped them to cope with the tragedy.

After the conclusion of the hespeidim and recital of pesukim, a shofar was blown in accordance with the custom of some in the Syrian community. Its cry was echoed by the copious cries from the assembled.

Outside, a mass of thousands waited to escort the niftarim on their final journey. The crowd was a cross section of Brooklyn’s diverse frum community, coming to pay their respects to the Sassoon children and to lend their sympathy to the bereft Syrian community.

“I’m just here as a Yid to feel the pain together with everybody else,” said a local man who asked not to be named. “Let’s hope that we can all be brought together for better occasions.”

This article appeared in print on page 4 of the March 23rd, 2015 edition of Hamodia.