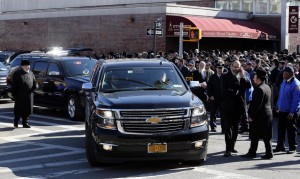 The tranquility of a chilly Friday night was broken by the sound of relentless sirens from first responders and medical personnel on Bedford Avenue in Flatbush. Along with it was broken any sense of tranquility in the Orthodox community, as the majority of a beautiful, holy, vibrant Jewish family was ripped from the heart of our community, in the most unfathomable way.

At about midnight on Shabbos, as the Sassoon family — pillars of the Sephardic community — were peacefully asleep, a fire broke out in the kitchen on the lower level of their home at 3371 Bedford Avenue. The fire, the deadliest in New York City since 2007, spread very quickly and soon engulfed much of the home.

Nothing could have prepared the most veteran and hardened firefighters for what they would find: 16-year-old Elaine Sassoon, her 12-year-old brother David, 11-year-old Rivkah, 10-year-old Yehoshua, 8-year-old Moshe, 6-year-old Sara and 5-year-old Yaakov — beautiful neshamos, zichronam livrachah.

They were seven out of eight children of Rabbi Gavriel (Gaby) Sassoon, a talmid chacham who spends his days at the Mirrer Yeshivah. The family moved to Midwood from Israel two years ago. The seven niftarim were scheduled to leave back to Eretz Yisrael aboard a 7:45 p.m. flight for burial.

Mrs. Gilah Sassoon and her daughter Tziporah, may they have a refuah sheleimah, leapt from the second floor window, escaping the ravaging flames, trapped with no other way out — injured, begging passersby for help.

“They were beautiful little children,” said a tearful neighbor, Rose Insel, remembering how she rewarded the kids with lollipops after voluntarily shoveling her walk. “It’s unbelievable. It doesn’t seem possible.”

A neighbor, Karen Rosenblatt, said she called 911 after seeing flames and smoke bellowing from the home. Her husband said he heard “what seemed like a young girl scream, ‘Help me! Help me!’” she said.

Firefighters arrived less than four minutes after the 911 call and discovered the badly burned and distraught mother pleading for help. When they broke in the door, firefighters encountered a hopeless situation — a raging fire that already had spread through the kitchen, dining room, common hall, stairway leading upstairs and the rear bedrooms.

More than 100 firefighters turned out to battle the blaze and brought it under control within an hour.

The last residential blaze with a similar death toll happened in 2007, when eight children and an adult were killed in a fire in the Bronx.

Members of the Boro Park community sensed something
terribly amiss almost immediately, as those in the vicinity of the Boro Park Hatzolah garage witnessed tens of members filing into ambulances, speeding off to relieve their overwhelmed counterparts in Flatbush.

Eli Fischer, a 30-year veteran of Hatzolah and a coordinator of Flatbush Hatzolah, described the scene as the worst he’s ever witnessed.

“It was probably the most heart-wrenching scenes that Hatzolah — or for that matter any of the involved organizations, including the FDNY — has ever witnessed,” Fischer said. “Many Hatzolah coordinators were on the scene almost immediately, and they kept working throughout Sunday afternoon to ensure that every step of the process was carried out. They worked in excellent harmony with the detectives, FDNY, NYPD, Misaskim, and other community leaders. They acted heroically and professionally.”

This was a very big test for our community, and our community agencies and volunteers, exhibiting tremendous professionalism, once again proved themselves. It takes a very special type of person to be able to carry on with life after being confronted with such traumatic a scene.

Fire and medical personnel continued at their work throughout the night, and as dawn broke, stunned members of the community who this time have abandoned any effort and any pretense of making sense of this event could be seen walking dazedly along the area… and this continued throughout the day.

An overcome New York City Fire Commissioner Daniel Nigro told reporters and community members who were gathered, “This is one of the worst fire fatalities in history.”

Later on Shabbos morning, Mayor Bill de Blasio arrived at the home and toured the home along with fire officials.

“You can literally see what a home for a large, strong family was and now it’s wiped out, every room empty, burned and charred,” the mayor said. “This is a tragedy that has very few examples to look at, it’s so painful … it’s so difficult.”

Grief counselors from various organizations, such as Chai Lifeline, Amudim, Sephardic Bikur Cholim, and others, spent Motzoei Shabbos and much of Sunday helping the beautiful and close-knit Sephardic community cope with the pain of losing these wonderful pillars of their community.

A special focus was on Yeshivat Ateret Torah — boys’ and girls’ schools, burgeoning mosdos haTorah in the Sephardic community — which have been providing a pure chinuch to the children of this community, including the Sassoon children, z”l.

Chai Lifeline’s Rabbi Yaakov Klar and Rabbi Dr. David Fox were on the scene at the yeshivah on Quentin Road since 6:45 Sunday morning, after meeting with the leadership the evening before in an attempt to help these adults grapple and deal with a phenomenon that in their wildest dreams they could never have fathomed: the responsibility of comforting young, vulnerable souls as their peers and friends have been ripped from their midst with shocking suddenness.

“In my entire career, I have never dealt with anything approaching this level of trauma — it is simply astounding what we are dealing with here today,” Rabbi Klar said. “We have been here all day today, comforting the grieving talmidim, wiping tears, listening, and being here for them. We are moving into the girl’s school tomorrow, and we will be here for this community for as long as it takes.”

The Chai Lifeline call center, which was activated on Sunday, received 1,000 calls from throughout the community, and their team was at the yeshivah throughout the day. A further meeting with parents and faculty was scheduled for Sunday evening.

Rabbi Klar shared the general message to the young students which he hopes will allow healing to begin.

“Do not attempt to process and deal with this tragedy as an individual — any kabbalot or resolutions should be done together with your peers and your teachers,” he emphasized. “At the same time it is important for the students — and their parents — to understand that their feelings and emotions are valid; everyone has a different way of dealing with the pain, and that is OK. The most important thing is to give ourselves permission to feel whatever we are feeling. Parents should not attempt to interfere with the process of their children.”

Avraham Raful, a son of the Rav of Keter Torah, where the Sassoons and many of their extended family have made their makom Torah u’tefillah under the leadership of Chacham Avraham Harari-Raful, described the Sassoon boys as exceptionally pious and with a degree of ehrlichteit which is more than the typical.

“I would learn with 12-year-old David, and he always displayed a keen understanding of the learning ahead of his peers,” Raful said. “It was evident that the children had spent the majority of their lives in Eretz Hakodesh — you could see a special kedushah and a special piety, especially as they have grown up in a home of a great ben Torah such as their father.”

The levayah for the Sassoon children was held at the Shomrei Hadas chapel in Boro Park on Sunday.

Exhibiting the achdus, nosei b’ol, and more importantly, the feeling that a tragedy of such epic proportion can never concern one family alone, thousands of people with pained looks etched on their faces, and many with tears streaming from their eyes, could be seen making their way to the levayah.

This article appeared in print on page 3 of the March 23rd, 2015 edition of Hamodia.